In response to repeated communication with CAMERA, THR has amended the article to acknowledge the fact that the subjects of documentary are not political prisoners, and were "accused of extremist crimes." But the amended text still contains a problematic and unsubstantiated assertion about alleged political prisoners. See below for a detailed update.

In fact, the two cases covered in the controversial documentary involve teen Ahmad Manasrah, who was convicted of two counts of attempted murder and Israa Jabris, who detonated explosives in her car as police approached her. A gas canister in the vehicle failed to explode.

Western nations do not regard convicted, incarcerated terrorists as political prisoners, as the European Council definition makes clear. Palestinians who carry out terror attacks against Israeli citizens are not protesting their own (Palestinian) government with non-violent activity.

Does The Hollywood Reporter consider those who carried out attempted murder and ignite explosives "political prisoners"?

A High Court ruling on the Manasrah case, in which victims 13-year-old Naor Shalev Ben-Ezra and 25-year-old Yosef Haim Tuito were gravely injured,  stated [translation from Hebrew by CAMERA]:

The two [Manasrah cousins] discussed their desire to become “martyrs” and be killed in war for the cause of religion, by carrying out a stabbing attack against Jews in order to kill them. The appellant [Ahmad Manasrah] and H. [Hassan] each went into their homes and took knifes. The appellant took a decorative knife with a 15-centimeter blade, and H. took a big kitchen knife with a 20-centimeter blade.

Indeed, the court’s finding later notes (page 22) that “The defendant and his cousin sought to die together as martyrs [Arabic: Shaheed] and to carry out ‘jihad.’ To that end, the appellant equipped himself with a large knife intended, as he put it, to ‘slaughter sheep’ or as a ‘solution to the conflicts.'” 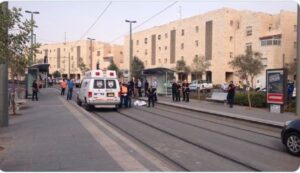 Police respond at the scene of the attack in Pisgat Zeev, Oct. 12, 2015 (Photo from Israel Police)

The High Court justices go on to describe how Hassan stabbed Ben-Ezra and then the two Manasras fled together, chased by two bystanders who witnessed the attack. According to the justices:

Bypassers who saw what happened hurried to help the boy [Ben-Ezra] and the two began to flee up an ascent on HaShisha-‘Asar Street. Some of the bystanders, including Shimon Mizrachi and Yehuda Chernokov (herein Shimon and Yehuda, respectively) ran after them. Close to the intersection of HaShisha-‘Asar Street and Moshe Dayan Boulevard, Shimon ran after H. and the appellant, who was running on the left side of the street, ran after Shimon with a knife in his hand. Yehuda yelled towards Shimon to be careful of the appellant. Shimon turned towards the defendant and attempted to neutralize him with a broomstick that he held in his hand, but the defendant dodged him and continued running on Moshe Dayan Boulevard in the direction of the city center, against the flow of traffic, until he was hit by a car.

About the attack on Tuito, Israel’s High Court determined that Ahmad’s felony was attempted murder and that his guilt was proven beyond all reasonable doubt. The justices wrote:

Other media outlets which have previously corrected after erroneously characterizing convicted Palestinian terrorists as "political prisoners" include The Independent and The Guardian.

Following CAMERA's repeated communication with THR, editors amended the text to refer to "Lea Tsemel, who throughout her career representing Palestinians has defended political prisoners as well as clients accused of extremist crimes."

In addition, editors appended the following to the bottom of the article:

Oct. 11, 11:42 p.m. PT: This story was updated to reflect that although Lea Tsemel has represented political prisoners during her career, Advocate focuses mostly on two clients accused of extremist crimes.

Media reports identify many of Tsemel's clients and the acts of which they are accused. While those clients identified in reports were clearly not political prisoners, no specifics on any alleged political prisoners were available. For instance, Tsemel had defended Rabbi Uzi Meshulam, convicted for his role in planned molotov cocktail attacks against police, among other offenses. In addition, Haaretz reported ("The Israeli lawyer who defends the most violent fighters against the occupation"):

… she represented Udi Adiv and the members of the Jewish-Arab ring who were convicted in 1973 of spying for Syria. Among others, her clients have included the terrorists who perpetrated the deadly attack on a bus on the coastal road in 1978 and the Palestinian prisoners who waged widespread hunger strikes in the 1980s. She tried to block the deportation of Hamas activists to Lebanon in 1992, and defended the murderers of a pregnant Palestinian who was killed because she was suspected of providing information to the Shin Bet security service. That’s a very partial list.

Also on that list is Abdel Aziz Salha, given a life-time sentence (but later released in the Gilad Shalit exchange) for his role in the brutal October 2000 lynching of two Israeli soldiers who took a wrong turn into Ramallah. He was photographed in the police station window holding up his blood-covered hands in triumph. Tsemel represented Tareq Barghout, a former colleague and then client, was arrested for shooting at Israeli police vehicles and civilian busses in the West Bank ("The Losing Lawyer in Israel Who Defends Palestinians Charged With Violence, NPR). The "two young Palestinians accused of killing an Israeli," noted by NPR's Daniel Estrin in his Jan. 15, 2020 broadcast are also not political prisoners.