Following MSNBC’s end of the year broadcast which falsely cast Israel as legally responsible for vaccinating Palestinian living in the West Bank and Gaza Strip, NBC continues to push the fallacious narrative.

The otherwise informative Jan. 3 article by Paul Goldman and Saphora Smith, entitled “Paralyzed by Covid-19, Israel bids to be first country to vaccinate its way to safety,” inaccurately reports:

Palestinians living under Israeli control in the occupied West Bank and Gaza are not included in the vaccination drive, prompting criticism that Israel is not meeting its legal obligations. 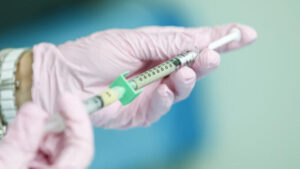 In fact, Gaza residents, along with the vast majority of West Bank residents, do not live “under Israeli control.” Gaza residents live under the control of their Hamas government.  Following Israel’s complete withdrawal from the Gaza Strip in 2005, then Secretary of State Condoleeza Rice stated in a May 1, 2006 briefing, “in fact, the Israelis do not any longer occupy Gaza.” Hamas’ Mahmoud Zahar agreed that Israel no longer controls the territory, saying in 2012: “Against whom could we demonstrate in the Gaza Strip? When Gaza was occupied, that model was applicable.” Additional details on international law experts who concur that the Gaza Strip is under the control of Hamas, and is neither occupied by Israel, nor under Israeli control, are available here.
In 2017, NBC corrected an erroneous reference to the “ongoing occupation” of the Gaza Strip, joining other media outlets which had previously corrected this point, including The Los Angeles Times.
As for West Bank Palestinians, the vast majority live in Area A of the West Bank, which is under full (security and civilian) Palestinian control. Thus, the overwhelming majority of West Bank Palestinians live under control of their own Palestinian Authority government — not Israel.
Moreover, while some anti-Israel critics erroneously claim that Israel has a legal obligation to provide West Bank and Gaza Palestinians with the coronavirus vaccine, the legal framework governing Israel-Palestinian relations — ie the bilateral Oslo Accords — clearly states that vaccines for this population are the responsibility of the Palestinian government.

Why does the NBC story note the critics’ incorrect claim about alleged Israeli legal responsibility, while ignoring the actual contractual obligations which explicitly state otherwise?

CAMERA has contacted NBC to request clarification. Stay tuned for any developments.