In response to communication from CAMERA, NBC has deleted the report from its web site and its accounts on Twitter and YouTube.

In the Aug. 9 "Sunday Today With With Willie  Geist" broadcast about demonstrations in Lebanon, NBC mistakenly included two frames showing demonstrations in Jerusalem, misidentifying them as Lebanon. Geist reported:

Today, protesters in Lebanon are calling for a sustained uprising to topple the government days after the horrific explosion that leveled parts of Beirut and killed more than one hundred fifty people. On Saturday, anger boiled over with demonstrators battling police in riot gear who fired tear gas and rubber bullets. The country`s prime minister has offered early elections but many local leaders say that is not enough.

In the final seconds of the brief report, two shots of Paris Square in central Jerusalem appear, the scene of ongoing Israeli demonstrations against Prime Minister Benjamin Netanyahu close to the Prime Minister's residence. 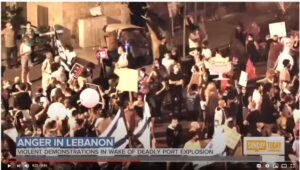 Israeli flags are visible in both frames and the distinctive buildings of Paris Square can be seen in the second frame, both labeled "Anger in Lebanon." CAMERA contacted NBC about the error yesterday. Stay tuned for updates about a correction.