The New York Times has long given short shrift to the existential and propaganda threats Israel faces — only rarely reporting the bigoted denigrating of that nation, while at other times belittling the assault, obfuscating and sidestepping the facts or, most typically, ignoring the widespread phenomenon entirely.
No doubt the same editorial news judgment that neglects the obsessive attacks on Israel, prompted the Times essentially to ignore Prime Minister Benjamin Netanyahu’s September 24, 2009 address to the UN General Assembly in New York. The Israeli leader’s speech (see in full below) was a call to action against one of the most grotesque propagandists of our time — a Holocaust denier sworn to Israel’s destruction whose regime is working to develop nuclear weapons to implement its aims. The Israeli leader also used the forum to expose Iranian president Mahmoud Ahmadinejad’s lies about the Holocaust as well as to challenge the distortions of the UN’s new Goldstone Report related to the recent Gaza conflict. In addition, he warned of the peril the world generally faces should weapons of mass destruction fall into the hands of radical Islamicists.
The paper chose to bury reference to the Israeli leader’s appearance in the second half of a story by Neil MacFarquhar at the bottom of page 6 entitled “With Bush Gone, Chavez Smells No Sulfur, While Netanyahu Assails Iran’s Leader” (Sept 25). A small photo of Netanyahu was paired with one of equal size of Hugo Chavez.
Other papers, especially those in New York where the story is a local as well as international one, thought differently of the event. The Wall Street Journal ran a large front page photo with the story inside; the New York Post ran a full front page photo, two-page spread inside, an editorial and extended excerpts of the speech. Newsday too gave focused attention to the story. CNN and Fox carried the speech live. 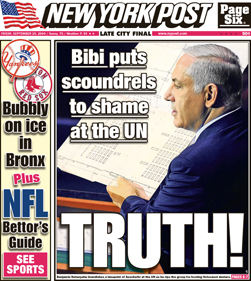 The Times, however, decided a story on the “milder side” of Muammar Qaddafi’s personality during an appearance at the Council on Foreign Relations was, for example, more significant, placing it at the top of the same page 6 where the story of the leader of the Jewish state decrying the assault on his nation was an afterthought tacked on in the bottom corner.
Nor was MacFarquhar’s cursory account free of factual problems. The reporter refers erroneously to what the Israeli prime minister said regarding evidence of the systematic Nazi genocide against the Jews. The reporter states:

Mr. Netanyahu began by waving a German document from World War II, the minutes of a meeting in which the Nazis planned the system of concentration camps used to kill people, primarily Jews.

Mr. Netanyahu specifically referred to the January 20, 1942 Wannsee Conference convened to formalize the so-called “Final Solution” to the Jewish problem, which entailed the rounding up of all Jews, their deportation to the east and their liquidation. The minutes record that detailed attention was given to various aspects of the plan, including defining the degree of Jewish “blood” that would designate Jewishness. That is, this was not a meeting to discuss ways to “kill people, primarily Jews” but one devoted entirely and solely to exterminating the Jewish people.
Of course, Hitler ultimately murdered millions of others but his overriding obsession, spelled out at Wannsee, was eliminating the Jews.
Prime Minister Netanyahu concluded his speech seeking to arouse world attention to the Iranian menace with a quote from Winston Churchill about the “confirmed unteachability of mankind” — the penchant of peoples and leaders to avoid facing danger when taking timely action could be simplest and least bloody.
The same “unteachability” apparently afflicts the New York Times where Israel, the Jewish state, is concerned. As former editor Max Frankel observed about the paper’s abysmal coverage of the Holocaust, that record was a “staggering, staining failure” on the part of the Times. Yet today the same extreme refusal to tell the story of what Israel faces in all its dimensions, fully and completely, is once more staining the reputation of the publication.
Fortunately for news consumers, the advent of the Internet and alternative media and the relative decline of the Times in importance diminish the impact of the biased coverage on the public and on policy makers.
September 24, 2009, United Nations General Assembly
Prime Minister Benjamin Netanyahu: