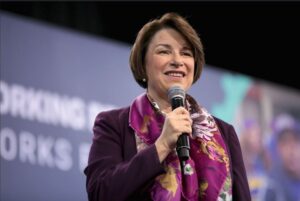 While Times national reporter Jennifer Medina twice reports that the senator declined to answer a question on U.S. aid, she ignores Klobuchar’s strong explicit statement later in her interview in favor of continuing aid.

Senator Amy Klobuchar of Minnesota also spoke at the conference, and declined to answer a question about military aid, saying only: “It’s not a good idea to negotiate these things right now.”

Further along, Medina repeats that Klobuchar ducked the question:

Ms. Klobuchar said at the conference on Sunday that she did not support Mr. Netanyahu’s promise to annex more of the West Bank, but declined to say whether she would be willing to withhold aid if the Israeli government proceeded with such plans.

Yet, at no point does Medina report that at 22:30 minutes into the interview, Klobuchar explicitly speaks in favor of continuing U.S. aid to Israel:

I just think allowing Iran to have a foothold in Syria, I will say this again, with Russia does not make Israel any safer and getting out of that [Iran] agreement did not make Israel safer and that is why I am so wedded right now to making sure we continue the aid.

Perhaps Klobuchar’s statement strongly favoring continued U.S. support for Israel is not consistent with the “new tone on U.S.-Israel relations” and “shifting” Democratic attitudes touted in The Times story, but by omitting her clear expression of strong support for continued aid, the paper does a huge disservice to readers, misleading them about a presidential hopeful’s position on an important issue.As Haaretz‘s Amir Tibon reported:

In reply to a question about conditioning American aid to Israel on actions of the Israeli government, Klobuchar said that in light of how Trump’s policies have increased the risk of war in the Middle East, she actually wanted to “make sure we continue the aid” to Israel.

Klobuchar’s statement in support of continued aid came in response to a question by moderator Ben Rhodes (20:00):

The question I have is, you know, towards the very end of the Obama administration, for instance, we abstained on a resolution on settlements at the U.N. We put out some U.S. positions which the Israeli government has not wanted us to do in the past on issues around Jerusalem, the final status issues. Um, if you have an Israeli government that is not showing any seriousness in pursuing a Palestinian state do you think that U.S. pressure, whether it’s aid, diplomacy — what is the balance between trying to exert some pressure on this issue to get them to take concrete steps towards a Palestinian state versus a status quote that is kind of more step back and let this to Israeli leaders to make the decisions?

CAMERA has contacted The Times to urge editors to publish a clarification or editor’s note making clear that Ms. Klobuchar made a very explicit statement during the J Street conference interview in support of U.S. aid to Israel.