While the Twittersphere response is genuinely hilarious, there is nothing amusing about the mainstream media’s depiction of deadly terrorists as well-meaning activists. Indeed, while The Washington Post al-Baghdadi case is an extreme example involving perhaps the world’s most notorious terrorist, the whitewashing of terrorists who killed Israelis, Jews and others is a common occurrence.

Last month, for example, Agence France Presse published a series of captions about “Bassam al-Sayeh, a Palestinian who reportedly died in Israeli jail.” (In fact, as a seriously ill cancer patient, he died in an Israeli hospital.) Though many of the captions contained biographical information of questionable relevance, some of it not accurate, none initially noted that al-Sayeh, a Hamas field commander, was convicted of authorizing and financing the 2015 the deadly West Bank shooting of Rabbi Eitam and Naama Henkin, murdered in front of their children. CAMERA compelled extensive revisions to the captions.

It’s not only terrorists who hunt down Jews in disputed territory who earn deferential or even friendly media treatment. Last January, the lead sentence of an AFP article about the opening of the trial for the terrorist charged with murdering four people at the Brussels Jewish museum described Mehdi Nammouche as a “‘very polite’ Frenchman.” CAMERA prompted removal of the description. 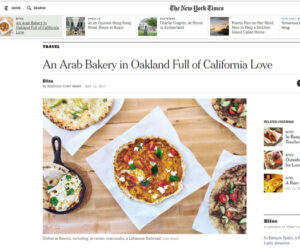 In a November 2017 arts piece, The New York Times described Rasmeah Odeh, convicted for involvement in the 1970 Jerusalem bombing which killed two Hebrew University students, as a “controversial Palestinian activist.”  The Times story in question, about a California bakery which features a huge mural of the convicted bomber, carried a headline which would fit right in with the #WaPostDeathNotices satire: “An Arab Bakery in Oakland Full of California Love.”

CAMERA compelled The Times to add an editor’s note acknowledging that the story “lacked context about the Palestinian activist Rasmeah Odeh.” The updated online story now explains: “In 1970, Ms. Odeh was convicted by Israeli courts for her role in the murder of two students. In 2014, she was convicted of immigration fraud in U.S. federal court and deported to Jordan in 2017.” But editors refused to correct the print edition. 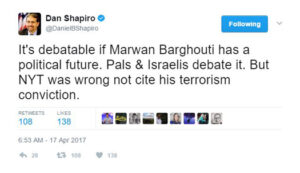 The Odeh fiasco was hardly the first time that the Grey Lady covered up for a Palestinian terrorist. Just months earlier, The Times was widely slammed for publishing an Op-Ed by Marwan Barghouti (“From Palestinian, A Palestinian Seeks Justice”) while concealing from readers that “the Palestinian leader and parliamentarian,” as The Times described him, was convicted in an Israeli civilian court of five counts of murder, one attempted murder, and four other terror attacks. While Times editor Matt Seaton initially defended the paper’s decision to withhold this critical biographical information from readers, he was later overruled, and The Times published an editor’s note reporting the offenses of which Barghouti had been convicted.

Similarly, in 2007, The Los Angeles Times ran an Op-Ed by Mousa Abu Marzook, identifying him only as “the deputy of the political bureau of Hamas.” The Los Angeles paper withheld from readers that Abu Marzook, who wrote so deceptively about international law as well as about bringing law to the Gaza Strip, was indicted in the United States in 2004 as a co-conspirator on racketeering and money-laundering charges in connection with activities on behalf of Hamas. 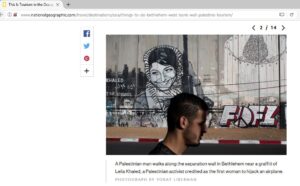 Odeh, of the cheery California bakery mural, was not the only female Palestinian terrorist to get a media makeover as an activist. In 2017, National Geographic amended a photo caption which originally referred to Leila Khaled as “a Palestinian activist credited as the first woman to hijack an airplane.” CAMERA pointed out that hijackers are terrorists, not activists, and editors agreed, commendably deleting the erroneous label.

In addition to applying inaccurate, euphemistic labels and withholding incriminating information, media outlets have employed other means to whitewash terrorists, such as describing their actions in positive terms. For instance, in December 2018, New York Times Jerusalem bureau chief described a drive-by shooting attack in which a Palestinian shot two Israeli soldiers dead as “bold.”

There is also the tendency to depict Palestinian terrorists as the victims as opposed to the perpetrators. Thus, regarding suicide bomber Hanadi Jaradat, John Yang of ABC’s “Nightline” asked in 2003: “Was she another victim? Was she a victim, as well as the other people who were in that restaurant?” Jaradat murdered 21 Israeli civilians in a Haifa restaurant.

“The headline should never have read that way and we changed it quickly,” said Kristine Coratti Kelly, The Washington Post’s vice president of communications, about the al-Baghdadi headline. The Post‘s willingness to correct is in line with many of the instances catalogued here.

While the correction is certainly welcome and necessary, the abysmally false depiction is wholly disheartening. Disheartening, though not exceptional, aside from al-Baghdadi’s notoriety as the world’s chief terrorist.