In response to CAMERA's communication with editors, The New York Times corrected the online story, removing the incorrect claim that circumcisions in Israel are under the control of the Orthodox Rabbinate. See below for a detailed update.

are protesting the rabbinate's monopoly on Jewish life in the Jewish state. Despite the fact that the vast majority of Israeli Jews are not Orthodox, the ultra-Orthodox hold the keys not just to Israel's Jewish sacred places, but to the life cycle events – circumcisions, conversions, weddings, divorces, burials – of the country's more than six million Jews.

This is not the first time that Weiss, a staff editor and writer at The New York Times Opinions desk, has made the erroneous claim that circumcisions in Israel are controlled by the Rabbinate. On Dec. 8, 2017, she likewise erred:

All elements of religious life — from the kosher certification of food to conversion to circumcisions, marriages and burials — are controlled by the rabbinate.

Op-Ed contributor Lesley Sachs previously made the same error ("Jewish Women vs. the Jewish State," July 1, 2017).
While the Orthodox Rabbinate does exert control over Jewish marriage, divorce and burials in Israel, it is completely uninvolved in all but a very small number of circumcisions in Israel. 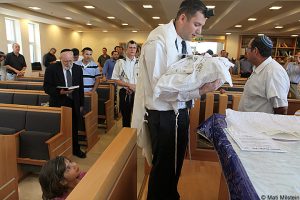 The circumcision of Tamar Sternthal's son in Israel. No registration, authorization or notification was necessary. (Photo by Mati Milstein)

Jewish parents can opt to have their sons circumcised or not. They can hire anyone they choose to perform the circumcision, a trained Orthodox, Conservative, or Reform mohel, or a surgeon, not trained in religious circumcisions. There are mohelim (those who perform ritual circumcision) who have been recognized by the Orthodox Rabbinate, and those who haven't. Parents may choose either. Parents do not report or record their sons’ circumcision with any authority.
As ITIM, an organization which assists the Israeli public in navigating the religious bureaucracy, explains:

The circumcision of one’s newborn is not a practice regulated by law, and it is not defined as a medical procedure, as the Supreme Court stated: “Circumcision is a practice whose performance requires certain medical expertise and whose performance involves certain risks of medical nature. Nevertheless, the overriding character of this act is not medical, but rather religious.” (2055/99). Though a joint commission of the Health Ministry and Chief Rabbinate exists, which deals with the certification of mohels and supervision of their work, this commission does not have the authority to prevent uncertified mohels from performing circumcisions.

For many years, it has been debated whether to pass a Mohel Law, and various proposals have been made over the years. Over the years, the Knesset has reviewed several versions of a proposed law, the most recent in 1998, due to a sharp rise in circumcision of adults, immigrants from the former Soviet Union. In 1999, the Israeli Supreme Court dismissed an appeal arguing for stricter regulations of mohels.

(The Times' Isabel Kershner has previously described ITIM as "an Israeli organization that has been critical of the rabbinate.")
The only case that comes to mind of Rabbinate intervention with circumcision is the 2013 incident involving a dispute between the parents who were undergoing a divorce. Ultimately, though, in 2014, the High Court “voided a ruling by the Supreme Rabbinical Court that obligated a woman to circumcise her son in response to her husband’s demand in divorce proceedings, saying the rabbinical court had exceeded its authority by doing so,” Haaretz reported.
The exception of the Rabbinate’s non-involvement in circumcision is circumcision for the purpose of conversion. In cases of conversion, the Rabbinate is involved.

When this CAMERA researcher had her infant son circumcised in Israel, there was no paper work, bureaucracy or registration involved. It was not necessary to inform any authority whatsoever. Had the infant not been circumcised, only his pediatrician would have known. The parents were indeed free to use whomever they chose to circumcise him – or not circumcise him at all.

The Associated Press has previously corrected the identical error.

In response to communication from CAMERA, editors commendably removed the incorrect information that the Orthodox Rabbinate controls circumcisions in Israel. The March 15 correction appended to the bottom of the article states:

An earlier version of this article described the circumstances around circumcision in Israel incorrectly. It is not the case that the procedure for Jews can be performed solely under the auspices of the ultra-Orthodox Rabbinate.