The history of Palestinian governance over any territory is very brief, dating back only to the 1990s. It takes a certain level of journalistic incompetence, therefore, to repeatedly misreport this particularly short chapter of history.

Newsweek has the dubious distinction of having achieved this feat, repeatedly tripping up on visions of a mythic Palestinian state that never was.

This story has been updated to remove information that includes an error that says no Palestinian state has ever existed.

Following ridicule, Newsweek somewhat backtracked, but still couldn’t be sure that no Palestinian state had ever existed. So its next corrective attempt equivocated:

This story’s previous reference to “historic Palestine” has been deleted; the legal and historical status of a Palestinian state remains a subject of controversy and debate.

More than three years later, the great minds at Newsweek have apparently chosen a side in the alleged great “controversy and debate” concerning the history of Palestinian statehood. Unfortunately, the esteemed journalists did not choose the side of history.

Palestinians had much of their homeland stripped from them following World War II, and they have fought to not only maintain what they say is theirs, but from Israeli attacks as well. 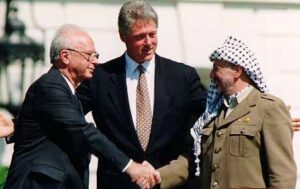 The signing of the Oslo Accords, 1993, establishing Palestinian control of territory for the first time in history (Photo by Vince Musi / The White House / Wikipedia)

Until the Oslo Accords in the 1990s in which Palestinians gained control over parts of the West Bank, Palestinian Arabs never had any sovereignty over any land that they now claim. As Newsweek rightly noted in 2018 before its misguided “corrections,” at no point in history was there a Palestinian state.
Thus, in no way is it accurate to state that “much of their homeland [was] stripped from them following World War II.” From 1917 to 1948, the land that Palestinians claim was the British Mandate of Palestine, under full British control. Before the Mandate, Palestine was part of the Ottoman Empire.

In 2015, after MSNBC aired maps which graphically made the same false point that Palestinians were supposedly stripped from their homeland, the network commendably broadcasted the following on air correction:

.  .  . The bottom line is that the first map showed the area as if it was a Palestinian state. The word across the map was Palestine. It was all, it looked as if it was all full of Arabs. And then the succeeding maps then showed fewer and fewer, less and less land all the time. Whereas bottom line was it was completely wrong. I mean, there was no state called Palestine. In 1946, it was a British mandate land. Britain was given control of the area by the League of Nations. And as a matter of fact, at that time roughly in that area, this is my estimate, there was about a half a million Jews living there and a million Arabs. So if anything the map should have reflected that demographic reality and it didn’t. And it gave the wrong impression.

Furthermore, McDonald’s statement as fact that Palestinians have fought “from Israeli attacks as well” ignores the fact that for many decades, over and over again, Palestinians initiated violence against Israeli civilians, attacking them in airplanes, restaurants, shopping malls, synagogues, holiday celebrations, and more.

Moreover, the following false equivalency is a gross distortion which has no place in a news story: “Both sides have been blamed by the other for car bombs, rocket fire, kidnappings, and terrorist attacks.” Terror attacks targeting civilians, including rocket fire, bombings and kidnappings, have long been a fixture in the Palestinian landscape, encouraged and glorified by the Palestinian leadership; there is simply no equivalent on the Israeli side, either in quantity or in support on the part of society at large or on the leadership level.

But if you believe in a fabled pre-World War II state of Palestine, what’s a little shrinkage of the notorious, long and brutal history of Palestinian terrorism including dozens of mass suicide bombings, tens of thousands of rocket attacks, fatal shootings at holiday and life cycle celebrations, and countless other heinous mass casualty events, until it neatly matches up with the exceedingly rare instances of Israeli terrorism such as the fatal firebombing attack on a family in Duma and the 1994 Hebron massacre, events noteworthy in their exceptionality?

CAMERA has contacted Newsweek to request correction of these points. If editors emerge from their ponderous consideration of Palestinian statehood and decide that history is correct after all, we will be sure to update this space.