What does Agence France Presse’s article yesterday about the fate of stolen West Bank antiquities have in common with widespread 2020-21 media coverage faulting Israel for not supplying present-day West Bank Palestinians with covid-19 vaccines? In both cases, coverage pointed a finger at Israel while completely ignoring the relevant Oslo Accords clauses which paint a very different picture.

In 2020, media outlets parroted anti-Israel voices falsely charging that under international law Israel is required to vaccinate Palestinians living in the West Bank and Gaza Strip while entirely ignoring the bilateral agreements determining otherwise. Countless reports alleging Israeli abdication on the vaccine front failed to acknowledged that Annex III, Article 17 of the 1995 Interim Accords placed responsibility for the population’s health into the hands of the Palestinian Authority, and further specified: “The Palestinian side shall continue to apply the present standards of vaccination of Palestinians and shall improve them according to internationally accepted standards in the field, taking into account WHO recommendations.”

AFP’s article yesterday, about stolen artifacts recovered from billionaire Michael Steinhardt as part of a deal with U.S. prosecutors, takes a page out of the so-called “vaccine apartheid” narrative. The piece, “Palestinians ignored in US deal on stolen antiquities,” suggests that Israel is required to relinquish the disputed items to the Palestinians, and assiduously ignores the bilateral agreements which refute the allegation of an Israeli obligation. 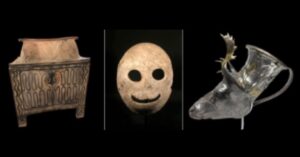 Covering the U.S. prosecutors’ deal stipulating that all of the objects would be turned over to Israel, whether they originated within Israel’s internationally recognized lines or in the West Bank, AFP quotes multiple sources alleging Israeli archeological malfeasance.

There’s Wael Hamamra, the head of Palestinian Ministry of Tourism and Archaeology, who cites the settlement as “unjust,” and argues that the items recovered from Steinhardt included “Palestinian archaeological artefacts (that) should be returned to their place of origin.” A archaeology professor Morag Kersel describes Israel as the “wild west” in the antiquities trade. (About the Palestinians’ own problems with the rampant looting of antiquities, however, Kersel and AFP are silent.)

Then, of course, there’s the requisite NGO alleging egregious Israeli violations of international regulations. Emek Shaveh, an organization said to combat “the politicisation of archeaeology” charges: “Israeli practices were regularly in breach of binding international rules,” including, allegedly, the 1954 Hague Convention.

It’s true that Palestinians criminal in the Jenin area or Israeli dealers trafficking in stolen art generally don’t bother with niceties like the Hague Convention, and it’s criminals like these who enabled Steinhardt’s illegal collection. About the the 9,000 year-old death masks, the most valuable of the items, Haaretz reported:

According to the Manhattan DA’s final report, the Neolithic masks were smuggled from the Judean Desert by “noted trafficker” Abu Ali Tawil, making their way into the hands of another dealer called Rafi Brown, who sold them to Steinhardt in 1991. The report noted that Israel’s law enforcement agencies were informed of these findings, and the three items were seized in their country of origin.

Is Israel responsible for the crimes of “noted trafficker” Abu Ali Tawil and dealer Rafi Brown? No. But AFP and Emek Shaveh nevertheless falsely associate official Israel with Steinhardt’s illegal antiquities, a strange position for an organization said to “curb the politicisation of archaeology.”

(Then again, would an organization which supposedly works to depoliticize archaeology write a report on “Archaeological Excavations as a Means of Control” in Jerusalem’s Old City which completely ignores the Muslim Waqf’s wanton and irreversible destruction of Temple Mount antiquities? Would an employee of such an organization compare Israeli archaeological tunnels to Hamas terror tunnels?)

Despite the numerous paragraphs alleging Israeli bad behavior for not turning over items to the Palestinian Authority, at no point does the article mention the relevant section of the Oslo Accords.  Article II of Annex III of the 1995 Interim Agreement states:

With due consideration to the Palestinian demand that Israel shall return all archaeological artifacts found in the West Bank and the Gaza Strip since 1967, this issue shall be dealt with in the negotiations on the final status.

As for the most valuable item in Steinhardt’s illicit collection, the stone masks dating to 7000 BCE, AFP reported:

They were found in the Judean desert, which spans both Israel and the West Bank. Their provenance remains uncertain, but Hamamra [from the Palestinian Ministry of Tourism] insisted they were looted from Palestinian territory.

According to the Manhattan District Attorney’s office, however, they “originated in the foothills of the Judean mountains, most likely in the Shephelah in Israel.” (Emphasis added.)

The DA’s estimation, just like the relevant Oslo clauses, never saw the light of day in AFP’s coverage. There, the highly relevant information lay safely concealed beneath a strata of tendentious reporting.