A teenaged assailant is shot dead as he carries out a violent attack.

Put yourself in the place of a news editor. Maybe you have limited space. Maybe not. In any event, you are aiming for a headline with both brevity and clarity. What information do you include and what do you omit?

If you include the assailant’s youth and not his violent act, the result is some version of this: “Police kill teen.”

If you include the violent attack and the fatal outcome, but not the age, you get: “Police kill assailant.”

If your publication is digital, you can afford a few more words, and you might get the most informative formulation: “Police kill teen who carried out violent attack.”

Of the first two, which is a better headline? The first (“Police kill teen”), which indicates the perpetrator’s age but not his crime? Or the second (“Police kill assailant”), which recounts the crime but not the age? The problem with the former is that the moment that reference to the crime is excluded, the slain assailant transforms from an attacker into a victim of police brutality – an innocent minor killed by police. The result is a completely distorted account of what actually happened.

Clearly, the perpetrator’s act, as opposed to his age, is more relevant to why he was killed, and therefore it’s this essential information which the headline should include.

Take the horrific and extreme case of this week’s massacre of schoolchildren and teachers in Ulvade, Texas, carried out by an 18-year-old shooter. The mass shooting came to an end when security forces eventually shot the young killer dead. Hypothetical headlines hewing to the first model which ignore the perpetrator’s crime would absurdly distort: “Police kill teen at Texas school.” Obviously, no editor ran a headline like that.

All too often, though, the straightforward professional calculation is compromised by inappropriate considerations when it comes to the headlines about Palestinian juvenile assailants killed as they carry out attacks against Israelis.

About the incident, The Times of Israel reported:

According to the military, hundreds of Palestinians threw rocks and firebombs at Israeli forces, who fired at a suspect who hurling a Molotov cocktail.

“A hit was identified,” an IDF statement said.

The IDF also reported troops on the ground heard gunfire, and videos posted to social media appeared to show heavy gunfire near the tomb.

“Israeli teen shot dead in Israeli raid on West Bank” is yesterday’s Associated Press headline, excluding any indication that the slain teen was himself involved in any violence.

The accompanying article also failed to disclose the police’s information that the teen had thrown a firebomb. It resorted only to a more general reference in the first paragraph to the teen “being wounded during clashes with Israeli forces in the occupied West Bank, the latest in a wave of violence that has persisted for months.”

AP’s selective account continued: “Wafa, the official Palestinian news agency, reported that the clashes erupted when Jewish worshipers, escorted by the military, arrived at a shrine on the outskirts of Nablus city to pray.”

The euphemistic terminology — “clashes erupted” — obscures the fact that Palestinians attacked Israeli troops escorting Jewish worshippers. And the failure to report the police’s statement about hitting a suspected assailant who hurled a firebomb leaves open the possibility that the young casualty was an innocent bystander in the wrong place at the wrong time.

Agence France Presse’s headline was no better than AP’s (“Palestinian teen killed by Israel army in West Bank: Palestinians”). Unlike AP, though, AFP did commendably include the army’s statement, reporting:

The Israeli army, which provides security for monthly pilgrimages to the site, said: “Hundreds of Palestinians took part in a violent riot as Jewish worshippers entered Joseph’s Tomb, throwing stones and firebombs at the forces.

“Soldiers responded with fire at a suspect throwing a firebomb. A hit was identified,” it said in a statement. “In addition, gunshots were heard in the area.”

The Islamic Jihad militant group issued a statement praising the “ambush” its fighters prepared for Israeli forces securing the pilgrimage, saying there was an exchange of fire between the two sides.

AFP’s inclusion of information within the article, however, does not exonerate the news agency from publishing a headline acknowledging that the teen was a suspected assailant. Many casual news consumers only read as far as the headline. Therefore, for countless readers, the damage of a selective headline presenting a distorted account is not undone by better reporting lower down.

Reuters’ headline — “Israeli forces kill Palestinian teen in West Bank clashes, Palestinian health ministry says” — is a step up from AP and AFP. Reuters at least acknowledges that the teen was killed in the context of clashes, although it does not spell out that the teen himself was suspected of violence.

This week’s coverage rehabilitating a violent assailant into an innocent victim represents standard practice when it comes to slain Palestinian teen assailants.

Same deal at @AP only worse. Not until *4th par* does AP note that Palestinian fatality tried to commit stabbing attack, infiltrating settlement w/a knife. But you know what info *was* in 1st paragraph? He was a teenager. https://t.co/LOBLOS2ZsP (1/2) https://t.co/DT5ZlRrk70 pic.twitter.com/Q9OZsq99dB

Last week provided a particularly stark example of this phenomenon. Islamic Jihad claimed minor Amjad El-Fayyed as one of its own. The Israeli army said he had fired shots at troops and hurled Molotov cocktails. Nevertheless, AP’s headline was: “Palestinian teen shot in Israeli raid in occupied West Bank.”

Katibat Jenin (Palestinian Islamic Jihad in the West Bank) published a martyr poster of 17 year old Amjad Walid al-Fayyed who was killed Saturday morning during clashed with IDF troops in Jenin. The publication confirms al-Fayyed was a member of the organization. pic.twitter.com/CBdq5WyTDv

Though teen Amjad al-Fayyed’s body was dressed in Islamic Jihad garb at the funeral and the terror group had identified him as a member, AP’s captions from the funeral failed to acknowledge his affiliation with the designated terror organization. 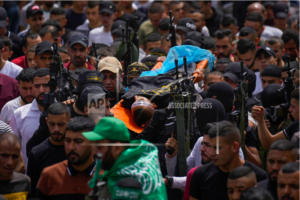 Palestinian mourners, some armed, carry the body of Amjad al-Fayyed, 17, during his funeral in the West Bank refugee camp of Jenin, Saturday, May 21, 2022. Israeli troops shot and killed al-Fayyed as fighting erupted when soldiers entered a volatile town in the occupied West Bank early Saturday, the Palestinian health ministry and local media said. (AP Photo/Majdi Mohammed)

The wire services’ habit of obscuring the crime while emphasizing the age was on display last month as well. “Israeli army kills Palestinian teen in W. Bank: Palestinian ministry,” was AFP’s April 13 headline. Meanwhile, the first paragraph, with much less visibility than the prominent headline, acknowledged: “the army said troops shot a suspect who threw a firebomb at them.”

Another incident just like that took place in February, and again, AFP’s headline was: “Israel forces kill Palestinian teen in W. Bank: Palestinians” (Feb. 22). Like with the other cases, key information noted in the paragraph but scrubbed from the headline was: “the military said it shot dead a suspect throwing Molotov cocktails.” In this incident, the teen assailant targeted civilians, not troops, with Molotov cocktails. As the article reported:

Israel’s army confirmed in a statement the death of a Palestinian, who was among three suspects who “hurled Molotov cocktails at passing drivers, endangering their lives.”

Troops were “conducting counterterrorism activity” in the Al-Khader area where numerous civilian vehicles had been targeted by the incendiary devices over the past month, the army said.

“The troops operated to stop them, firing at one of the suspects that hurled a Molotov cocktail toward passing vehicles. The suspect was hit,” it said.

With the repeated abandonment of strictly journalistic considerations in favor of predetermined narrative and partisan proclivities, the question arises: are there any adults left in the newsroom to put a stop to this incessant juvenile practice?