On May 22, the Twitter and Facebook accounts of “Al Jazeera Palestine” commemorated the anniversary of the alleged “Tantura Massacre” in 1948 with the following image: 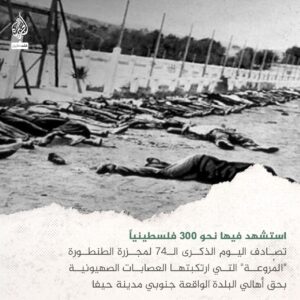 The Arabic text states: “The martyrdom of about 300 Palestinians – today marks the 74th anniversary of the ‘horrific’ Tantura massacre which was carried out by the Zionist gangs against the residents of the town, located south of Haifa.”In fact, the image in question is actually a 1955 photograph from Algeria: 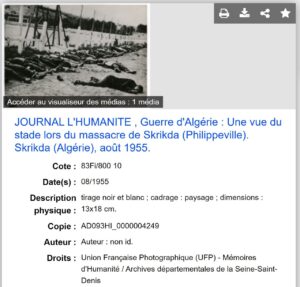 Notably, Al Jazeera’s Palestinian staff, despite any proof, unequivocally accuses troops of having deliberately targeting their colleague Shireen Abu Aqleh. This photo fraud (as well as other relevant cases) should therefore be at the backdrop of any attempt to determine its credibility.