CAMERA last night elicited a commendable on air correction of the Dec. 20 PBS "NewsHour Weekend" segment which had grossly inflated the number of Palestinian refugees living in Lebanon and overstated the percentage of the registered refugees living in refugee camps.. See here for a detailed update.

While the United Nations Relief and Works Agency for Palestine is grappling with a serious funding shortfall, the controversial organization nevertheless enjoys vast marketing and public relations resources, drawing on the support of sympathetic journalists who advocate on UNRWA's behalf by abandoning their professional responsibilities to provide impartial coverage.

PBS is the latest media outlet to join UNRWA's fundraising campaign (NewsHour Weekend, "Palestinian refugees celebrate Biden-Harris win, hope for relief," Dec. 20). Correspondent Leila Molana-Allen obscures the inherent problems plaguing the UN agency and suggests that Trump administration policies regarding Jerusalem and the West Bank are to blame for the hardships of Palestinian refugees in Lebanon. She reported:

The US used to provide a third of UNRWA's budget, its biggest donor by far. Then suddenly, in 2018, the Trump administration slashed the funding. Meanwhile, the U.S. controversially moved its embassy to the disputed city of Jerusalem, and endorsed the building of more Israeli settlements in the West Bank, eroding the hopes of Palestinians that a future peace deal might one day allow them the right to return to the lands where their ancestors lived. . . .

Further down, she adds:

In 2018 when the Trump administration cut UNRWA's funding, they called the organization irredeemably flawed. They said that money was being wasted. They said that Palestinian refugees have become too dependent on UNRWA. How did you react to that?

The accusation is unfair, and we know that it was politically motivated. The reality is that the refugees are going to exist whether UNRWA disappears or not. UNRWA is not a solution. UNRWA is a band aid, it's a temporary solution. It's been temporary for 70 years, which is not an indictment of UNRWA, it's an indictment on the inability of the parties to the conflict and the international community to achieve a solution which will resolve these issues. It's very important that the US comes back into the fold.

NewsHour does not include a single source critical of UNRWA, nor does Molana-Allen herself point out critics' argument that not only does UNRWA fail as an effective "temporary solution," but that the organization itself is responsible for perpetuating the conflict. As Asaf Romirowsky, executive director of Scholars for Peace in the Middle East, stated in The Tower (“The Real Palestinian Refugee Crisis“) that it is UNRWA which is dependent on the refugees:

As Romirowsky and Alexander Joffe wrote:

Since its inception in 1950, UNRWA has worked against resettlement in Arab countries where Palestinians are located. It has done so by shifting its mission from refugee relief to education, devising its own expanded definitions of who is a refugee, and expanding its legal mandates to “protect” and represent refugees. As a result, the Palestinian clients of UNRWA have gradually taken over the organization and have undermined an international relief effort, created in naïve good faith, under the auspices of the UN General Assembly.

Indeed, UNRWA's unique definition for Palestinian refugees, which includes subsequent endless generations of descendants of the original refugees, is the very reason why the population expanded from hundreds of thousands in 1948 to some five million today. Were the usual definition of refugee, as determined by the 1951 Convention Relating to the Status of Refugees, to be applied to Palestinians, so that only those who actually fled or were expelled in 1948 were to qualify, the figure would shrink from 5 million to around 30,000.

Another relevant distinction between United Nations High Commissioner for Refugees, which handles the world's refugees excluding the Palestinians, versus UNRWA, responsible for Palestinian refugees, is that while the former disqualifies those who have acquired citizenship in another country from receiving refugee status, UNRWA does not.

UNRWA cares for the needs of just one population group — the Palestinians — and has over 30,000 employees.  In contrast, UNHCR, which is tasked with dealing with all of the world’s refugees (aside from Palestinians) has a staff of less than 18,000.

In their book War of Return: How Western Indulgence of the Palestinian Dream Has Obstructed the Path to Peace, former MK Einat Wilf and researcher Adi Schwartz argue that by casting millions of descendants, now several generations removed from the original 1948 refugees, as refugees themselves, UNRWA promotes the so-called Palestinian "right of return" of millions of Palestinians to Israel.  Those who care about Israel's continued existence, including President Barack Obama, reject the flooding of Israel with millions of Palestinians, understanding that such a move would mean the dismantlement of the Jewish state.

While Molana-Allen highlights that the employment that UNRWA provides is essential to fourth- and fifth- generation Palestinians in Lebanon with few other employment options, she fails to note that one of the major criticisms of UNRWA is that while it cares for the needs of just one population group — the Palestinians — it enjoys a larger staff than United Nations High Commissioner for Refugees, which cares for all other refugee populations in the entire world. Thus, UNHCR, which is tasked with dealing with the world’s refugees (aside from Palestinians) in 135 countries, has a staff of  17, 324 according to latest available figures. In contrast, UNRWA, which is responsible only for Palestinian refugees has over 30,000 employees.

In a straightforward factual error, Molana- Allen and host Hari Sreenivasan twice grossly inflate the number of Palestinian refugees living in Lebanon. Sreenivasan introduced the segment, stating: "The United Nations Relief and Works Agency for Palestine refugees or UNRWA says more than 470,000 refugees are living in Lebanon, most of them have been there for generations." 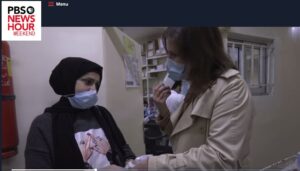 Molana-Allen (at right) in the broadcast

I hope that America will reconsider its position on this. To help UNRWA. Because UNRWA is the hope of the refugees, it's all we have. Honestly, it's our only shelter.

The hope of Palestinians living in Lebanon's camps, nurtured by UNRWA, is voiced by interviewee Mais, a 10-year-old girl who fears her UNRWA-run school will be shut and wants to be a teacher. "[S]he believes that one day she and her family will go back to Palestine, a place she knows only in stories," intones Molana-Allen.
(Mais worries: "If there was no school, I'd be very sad. How can I become a teacher, without the school and the teachers that are teaching me?" UNRWA's teachers, including many in Lebanon, propogate antisemitic incitement, for instance, praising Hitler, calling for the murder of Jews, and glorifying terrorists. Like others before her, Molana-Allen ignores this unflattering fact about UNRWA.)
By nurturing false hopes that one day the descendants of Palestinian Arabs who became refugees in 1948 will "return" to "Palestine," UNRWA consigns future generations to Mais' stateless status in Lebanon. PBS, partially federally funded through the Corporation for Public Broadcasting, conceals from U.S. tax-payers this harsh reality as it advocates for the financial backing of the problematic UN agency.