Hip hop artist Jay Electronica released two albums this year. The first, A Written Testimony, caused controversy with its references to the Rothschild banking family and to the “synagogue of Satan.” The artist was again in the news over the summer for making comments about Rabbi Abraham Cooper that were regarded as antisemitic. Then in October, his second album of the year, Act II: The Patents of Nobility (The Turn), repeated the same references to the Rothschilds and to the “synagogue of Satan.” In case there was any doubt about the meaning, other tracks on the album mentioned notorious antisemite Louis Farrakhan, who has clearly used the term to refer to Jews, and Farrakhan’s publication, the Final Call. 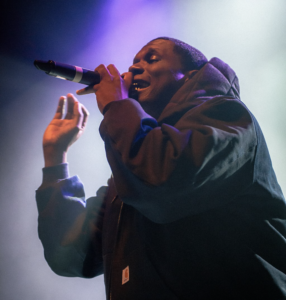 When A Written Testimony came out in March, some gave Electronica the benefit of the doubt due to his somewhat sordid history with Kate Rothschild, the granddaughter of the 3rd Baron Rothschild and the niece of the 4th Baron Rothschild, which left room for ambiguity over the artist’s subjective intent. But including the same phrases on his second album after being called out by a Jewish DJ left no doubt that Electronica simply disregards Jewish sensibilities. Yet, the popular music magazine Pitchfork called Act II: The Patents of Nobility (The Turn), one of the top 50 albums of the year.

Pitchfork is a 25-year old music publication that was acquired by Conde Nast in 2015. It boasts 7.3 million unique users, most of whom are millenials, and it’s long been considered highly influential. It calls itself, “the most trusted voice in music.” But when this publication compiled its list of “The 50 Best Albums of 2020,” its editors decided to include an album with antisemitic lyrics. Act II: The Patents of Nobility (The Turn) is number 14 on Pitchfork’s list.

Electronica’s March album, A Written Testimony, included the lyrics, “And I bet you a Rothschild I get a bang for my dollar / The Synagogue of Satan want me to hang by my collar.” As the Jewish News points out, Jay Electronica’s previous relationship with Kate Rothschild adds a layer of meaning that could be personal. But regardless of the intent, there’s little doubt that, on their face, these lines promote what the ADL calls a “longstanding anti-Semitic conspiracy theory” about the Rothschild family, antisemitic tropes and stereotypes about Jews and money, and rhetoric reminiscent of Louis Farrakhan, a man the ADL calls a “notable extremist figure, railing against Jews, white people and the LGBT community.”

Perhaps that’s why Jewish DJ and Hot 97 radio personality Peter Rosenberg called the lyrics “cringe” and said “you can only have your group associated with the word ‘Satan’ so many times before you go, ‘yo what’s going on?’” On Twitter, Rosenberg wrote, “As a Jew it puts me in a bad position. I can ignore the fact that I instantly felt a pang of discomfort and offense and basically sell out my culture or I can be accused of being the ‘Jewish media’ hating on this man. But it’s how I felt. The line offended me.”

I went from nothing into something like the Planet Earth
I showed these major labels how to make a man from dirt
And breathe in his nostrils, fill him up with Gospel
Leave him at the mountain top blasting at the Rothschilds
Who dat? Jay Elect, Voodoo Man

And in “Better in Tune with the Infinite,” he says:

My feet might fail me, my heart might ail me
The synagogues of Satan might accuse or jail me
Strip, crown, nail me, brimstone hail me

(Both tracks, though included in the 2020 album, seem to have been released earlier.)

Jay Electronica’s more clearly antisemitic statements over the summer would seem to resolve any ambiguity over his intent. JNS reported in July:

Rapper Jay Electronica called Rabbi Abraham Cooper, associate dean and director of global social action of the Simon Wiesenthal Center, a “coward” and a “devil” following the rabbi’s appearance last week on the podcast hosted by Nick Cannon, who apologized for the second time for making anti-Semitic comments on an episode last month of his online show.

“Rabbi Abraham Cooper is a COWARD who LIED to our brother Nick Canon about the history of the caucasian [sic] race. Ask him does he stand behind the VILE TEACHINGS of the Talmud? Don’t be a coward next time Cooper you DEVIL,” posted Jay Electronica in a series of anti-Semitic tweets on July 25.

Jay Electronica, whose real name is Timothy Thedford, also tweeted in support [of] Nation of Islam leader Louis Farrakhan, who has an extensive history of anti-Jewish rhetoric.

“Sit down w The Hon. Louis Farrakhan or The Exec Council of The NOI and defend your claims and prove us wrong. WE are INDEED THE TRUE Children of Israel. And you are an imposter and birthright stealer as described in the scriptures. The ADL, THE WEISENHALL CENTER [sic]… BRING EM OUT,” he tweeted.

It’s unlikely that a music industry publication would have been unaware of his exchanges with Rosenberg in the spring. Pitchfork, however, chose to ignore all of this when compiling its top 50 list.

When mainstream publications award accolades to antisemitic materials, they contribute to the normalization of antisemitism. In 2018, for example, CAMERA noted that we saw Food and Wine name Reem’s California Bakery one of its top ten restaurants of the year, despite that establishment’s huge mural celebrating convicted terrorist Rasmeah Odeh.

Even if Pitchfork believed that from a strictly musical perspective, the distinction was warranted, the publication should have qualified its comments about the album, explaining the problems. Instead, it became the latest mainstream publication to overlook antisemitism when doling out awards.