In a Nov. 8 article, “Loved or Hated, Trump stamped his face on the Middle East conflict,” Reuters erroneously reported:

“Trump Heights” was the name given to a new settlement in the Israeli-occupied Golan Heights, after he recognised Israel’s claim to sovereignty over the plateau that was captured from Syria in a 1967 war. (Emphasis added.) 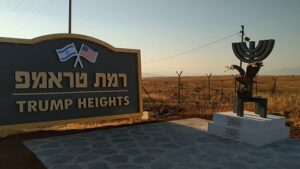 Though Prime Minister Netanyahu promised the establishment of a “new community” on the Golan Heights in 2019, Trump Heights is not a newly established community, but the renaming of Kela-Beruchim, home to a tiny, neglected elderly population (14 retirees and five students).
As Haaretz reported (“Netanyahu Promised to Name a ‘New’ Community After Trump. We Went There and Locals Are Not Pleased“):

on May 12, Netanyahu announced thata site had been located for the new community named for Trump, and it would initially comprise 110 plots for religious and secular families
But the location chosen by the government is anything but new. Indeed, 63-year-old Nina Missin has been calling it home for well over 20 years.

Israel has not founded a community, or “settlement,” in the Golan Heights in decades. Though CAMERA has notified Reuters of the error, editors have yet to correct.
Donate Now