With the return of intensive Palestinian violence targeting civilians on Israel’s street, language in international media reports recasting perpetrators as victims also threaten to make a comeback after having largely retreated. 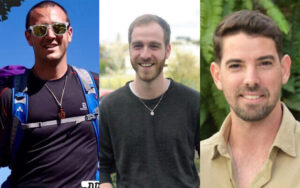 From left: Israelis Tomer Morad, Eytam Magini and Barak Lufen, murdered by a Palestinian terrorist in a Tel Aviv bar April 7, 2022. (Courtesy, via Times of Israel)

Leading news agency Reuters was not at all exempt from the phenomenon of grossly distorting language which swept up international media outlets several years ago. Notable Reuters contortions from that earlier wave of violence include references to Palestinians “who died at the scene of attacks on Israelis,” captions whitewashing Palestinian assailants as Palestinians who “confront” Israelis, a graphic referring to Palestinians terrorists killed in “street violence,” and an abominable headline: “Israelis kill knife man,” referring to a Palestinian attacker who tried to attack an Israeli security official.

Misinformation and distortions in headlines can be particularly harmful given that casual news readers may catch only the prominent, misleading headline, missing clarifying data appearing further down in the news item.

No, @Reuters. Don’t do that again. The Palestinian was *terrorist* who shot dead 2 civilians, wounded 12 in #telavivattack bar. He was the perpetrator. Not the victim. How about: “Palestinian kills 2 in Tel Aviv bar, shot dead.” @CAMERAorg https://t.co/bQPCHMi1FI

On Friday, CAMERA contacted senior Reuters officials, noting that the headline fails to make clear that the forces shot the Palestinian dead because he carried out a terrorist attack, opening fire in a bar, killing two Israeli civilians, and wounded a dozen more. (Reports of the third victim’s death arrived following CAMERA’s communication with the Reuters.)
The most salient information in the incident was that a Palestinian killed Israelis in a Tel Aviv bar. That the attacker was killed at the end of a long manhunt is secondary. Why did Reuters’ headline note the Palestinian attacker’s death, but not his victims’? By doing so, Reuters inverts events, depicting the assailant as a victim.
In contrast to Reuters’ obscuring headline, the Associated Press ran this straightforward, commendable headline: “Palestinian kills 2, wounds several in Tel Aviv shooting.”
CAMERA sent Reuters a suggested headline which makes clear that the assailant murdered innocent victims, and also that he was killed by security forces: “Palestinian kills two Israelis in Tel Aviv bar attack, is shot dead.” Agence France Presse, another leading wire agency, ran a headline along these appropriate lines: “Israeli police kill gunman who who shot dead two in Tel Aviv.”

Following CAMERA’s correspondence to Reuters, editors subsequently improved the headline. The amended headline is: “Israeli forces kill Palestinian gunman after Tel Aviv bar attack.” The improved headline now acknowledges that the slain Palestinian was gunman. But the inadequate headline nevertheless still fails to note that he murdered three innocent civilians. Why is his death headline worthy, while his victims’ are not?
Headlines which depict Palestinian assailants as victims and which cover up their heinous crimes conform with the demands of journalists against journalism mandating that reporting of all Palestinian-Israeli affairs be filtered through the false prism of “Israel’s military occupation and its system of apartheid,” a predetermined mold in which Palestinians have zero culpability for their actions.
A striking June 2021 report by Reuters Institute for the Study of Journalism revealed that out of 46 surveyed countries, the United States ranks dead last (29 percent) in terms of public trust in news media. Editors at Reuters should take note of the alarming nadir in the relationship between the media and its readers. With headlines like Reuters’ on the Tel Aviv terror attack, is it any wonder that the American pubic trust in the media has bottomed out?
See also “GuardianRevises Headline That Erased Israeli Terror Victims”