In 2020, the Smithsonian Institution reported that it would receive $1 billion in federal funding for fiscal year 2021, and that 62 percent of its funding came from federal government sources. 2022 appropriations are similar.

And yet, Smithsonian magazine is promoting trips led by a biased, anti-Israel organization, the goal of which is to promote anti-Israel activism in the US.

Of course, nothing could be further from the truth.

Craig Corrie, the father of Rachel Corrie, says in the same video, “Eyewitness Palestine, what they do better than any group that we’ve been associated with, is train people to come back and make sure that they do something when they come back.” Eyewitness Palestine also proudly proclaims that its former participants helped lead the 2018 campaign in Durham, North Carolina, to ban police from cooperating with Israel. This campaign reportedly involved numerous false and demonizing statements about Israel. Trips run by this group are beyond educational; they are designed to incite anti-Israel hostility in the US.

The website tells us that those who join its trip can expect to meet representatives from anti-Israel NGOs such as B’Tselem, Adalah, Al Haq, Addameer, and Defense for Children International – Palestine. No organizations that would be likely to present an alternative point of view are listed.

Yet, the taxpayer funded Smithsonian magazine promotes these trips:

Eyewitness Palestine takes visitors to the occupied territories to help them learn more about the conditions facing Palestinians and to meet with both Palestinian and Israeli peacemakers. Founded in 2001, the educational program began as an outgrowth of the Fellowship of Reconciliation, an interfaith peace and justice organization in the U.S. Eyewitness Palestine is leading three delegations this year, dealing with conditions faced by Palestinian farmers, race and class, and more.

Prior to listing Eyewitness Palestine among other recommended “solidarity tourism” travel companies, Larson’s article also includes an insidious comparison of Israel and South Africa: “Solidarity tourism grew out of both the rise of mass tourism in the mid-20th century, which has grown to be a trillion-dollar industry, and the rise of transnational activism. Groups like the American Friends Service Committee, a Quaker activist group, and other religious organizations sent study-abroad trips to places like South Africa and Israel beginning in the 1950s.” 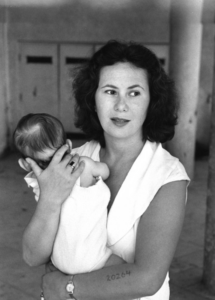 In South Africa, two of the apartheid laws, the Population Registration Act and the Group Areas Act, were passed in 1950. Israel at that time was newly reborn country with scant resources struggling to absorb unprecedented numbers of immigrants, including Holocaust survivors as well as many Mizrachi and Sephardic Jewish refugees from Arab lands; putting the two countries in the same category is ludicrous.

Larson also discusses the work of Jennifer Kelly, a sociologist at University of California, Santa Cruz, who “studies solidarity tourism in the context of the contested lands of Gaza and the West Bank.” Kelly uses the term solidarity tourism, Larson quotes, “‘as an umbrella term for a lot of different forms of tourism: decolonial tourism, critical tourism, or political tourism. … It’s really crucial to understand that tourism facilitates colonialism and replicates colonial state practice.’” Of course, Kelly and Larson have it backwards – it is Jews who are indigenous to the land of Israel, and the re-establishment of a Jewish state in the land after 2000 years of exile was a successful act of decolonization.

The Smithsonian magazine is a face of the Smithsonian Institution, the purpose of which is to “enrich the lives of the American people,” and the Board of Regents of which includes the Chief Justice of the US Supreme Court, the Vice President of the US, and six members of Congress. It should not promote a tour group that spreads falsehoods about Israel, our democratic ally and the world’s only Jewish state, and incites anti-Israel hostilities in the US.