The Associated Press was the latest major news agency to publish a headline obscuring Palestinian violence. Yesterday’s headline originally concealed a Palestinian firebombing attack, along with other violence, stating: “Israel troops kill Palestinian in West Bank, 4th in past day.” In particular, Mohammad Ali Ghneim, the Palestinian in question, was throwing a firebomb at an Israeli vehicle when troops killed him.

Thus, he was an assailant, not a victim, and yet AP’s headline inverted this basic fact. 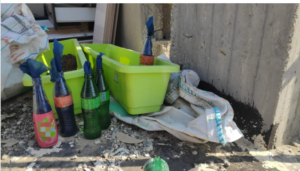 In at least two out of the three other cases, the other Palestinian casualties were also assailants.
As Haaretz reported about one of the three: “The Palestinian, 17-year-old Muhammad Zkaarni, was shot and wounded after opening fire on soldiers, according to the Israeli army.”

Regarding one of the female casualties, “The Israeli army said one had stabbed and lightly wounded a policeman in the city of Hebron,” as the accompanying article reported.
The second female casualty is the only case out of the four which is not so clear: the woman approached troops suspiciously, ignored their calls to stop, and was later found to be unarmed.
Following CAMERA’s communication with AP, the news agency yesterday amended the headline to acknowledge the firebombing. The relatively improved headline states: “Israel troops kill 4th Palestinian after firebombing.”
While the amended headline does note the firebombing, it still fails to make clear that the slain Palestinian was the perpetrator of that attack. In other words, Ghneim was killed because he was an assailant; he was not an innocent bystander, or worse — an innocent whom the Israeli troops targeted with no justification.