In response to communication from CAMERA Arabic, editors corrected the erroneous reference to "Palestine" and language which had suggested that all of the Israeli Arabs living in the "Triangle" had been displaced in 1948. See below for a detailed update.

In response to communication from CAMERA, Israel Hayom amended its headline so that it no longer misleadingly refers to "transfer" of Israeli Arabs to the West Bank. See below for a detailed update.

A Reuters article earlier this week about Israeli Arab fears concerning President Trump's "Prosperity to Peace" plan wrongly suggested that residents of Arab towns in "The Triangle" region of northern Israel are in danger of being uprooted from their homes and land.

Contrary to the Feb. 3 headline, "Arabs in Israeli border towns fear Trump plan will transfer them to West Bank," the plan does not propose removing residents from their homes in Israel and relocating them into the West Bank, a separate geographic area. Rather, it suggests transferring the towns, the residents together with their homes and land, from the State of Israel to the future State of Palestine. In other words, the plan calls for redrawing the map, and not transferring people from one place (Israel) to another (the West Bank). The proposal states: "The Vision contemplates the possibility, subject to agreement of the parties that the borders of Israel will be redrawn such that the Triangle Communities become part of the State of Palestine."
Indeed, the third paragraph of the accompanying Reuters article more accurately and carefully reports that Trump's proposal "raised the possibility that 11 Arab border towns abutting the West Bank would become part of a new Palestinian state." 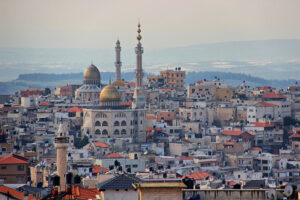 Because the idea is to transfer the towns lock, stock and barrel – the residents don't move from their homes or their land – from the State of Israel to a future State of Palestine by way of redrawing the map – references in the article to "losing" "ties to the land" or "leav[ing] our land" are entirely inaccurate and misleading.
Thus, the article misleads, stating residents: "fear losing their rights and ties to the land they have lived on for generations." Indeed, residents may harbor fear of losing "ties to the land," but that fear is baseless, as the plan does not at all call for removing them from their land. Readers should be informed of the plan's actual contours, as opposed to baseless fears presented at face value without any clarification.
Similarly, the article includes a quote which reinforces the false notion that the plan calls for removing the residents from their land. Umm Mahmoud of Umm al-Fahm is quoted:

I cannot accept being transferred to the West Bank. Although we [Israeli Arabs and Palestinians] are the same, we cannot leave our land, lives and traditions.

Contrary to Reuters' standards, the Arabic version refers to "flags of Palestine," instead of "Palestinian flags."

Also, in a second problematic difference between the two languages,the Arabic version errs:

Most of the Arabs of Israel […] are the descendants of the Palestinians who remained in their homeland but were internally displaced after the 1948 war (Emphasis added. Translations by CAMERA Arabic.)

Israel’s Arabs [...] are mostly the descendants of the Palestinians who remained in their homes or were internally displaced following the 1948 war that surrounded Israel’s creation." (Emphasis added.)

The Arabic formulation altogether omits the majority, who were in fact not displaced, and remained in their homes. 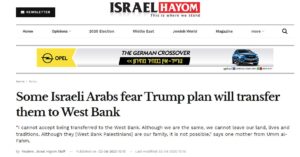 Israel Hayom published an article largely derived from the Reuters story, but with its own edits ("Some Israeli Arabs fear Trump plan will transfer them to West Bank"). The subheadline features the misleading quote from an Umm al-Fahm resident:

I cannot accept being transferred to the West Bank. Although we are the same, we cannot leave our land, lives and traditions . . .

In response to communication from CAMERA, Israel Hayom commendably amended its headline so that it no longer misleadingly refers to Israeli Arabs fears of "transfer" to the West Bank. The improved headline states: "Some Israeli Arabs fear Trump plan will put them under PA control."