As CAMERA has noted previously, on May 27, Rolling Stone reporter Daniel Kreps published an article titled “Rage Against the Machine, Serj Tankian, Roger Waters Sign Letter Asking Artists to Boycott Israel.” The article (one of six articles biased against Israel printed in an eleven-day period) quoted extensively from the titular letter, including repeating the false charges of apartheid and war crimes, and names some of the more prominent signers. Kreps did not seem to have reached out to any number of people or organizations in the music and entertainment industry who could have provided a balancing perspective, nor did the article mention Roger Waters’s virulent antisemitism.

Including an opposing point of view, and information about Waters’s well-documented antisemitism, would have been the bare minimum for Kreps to have done at the time.

In Israel, movies have the unique power to bring together Jews, Arabs, and people of all races, ethnicities, and backgrounds in collaboration under a shared love of the arts, working together towards the common goal of telling their stories, and building bridges of compassion and understanding.

The annual Tel Aviv International LGBTQ Film Festival (TLVFest) embodies this spirit of unity and truth, featuring films from filmmakers of all backgrounds, including Palestinians.

For this reason, we reject any attempt to boycott TLVFest – Israel’s largest LGBTQ Film Festival — which works to showcase the stories of LGBTQ people globally and create a brighter future for LGBTQ people both inside Israel and around the world.

We stand united with all the participating filmmakers against the divisive rhetoric espoused by boycott activists who seek to misinform, bully and intimidate artists into removing their films from the festival or shame them for participating in the festival.

Yet, both Nexus and Google searches reveal no reporting at all about this letter in Rolling Stone. 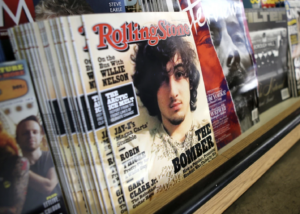 In 2021 alone Rolling Stone has printed at least eleven articles about Gene Simmons and his band Kiss – including articles about the group’s tour dates and Simmons’s art show and his Covid diagnosis. Yet his signature on this anti-boycott letter was not deemed newsworthy.

The contrast between the reporting on the pro- and anti-boycott letters merely demonstrates once again that Rolling Stone is only interested in giving its readers one perspective on the Israeli-Palestinian conflict.