In response to communication from CAMERA Arabic, Deutsche Welle introduced a marginal improvement to the Arabic article, which now refers to "new settlements units" as opposed to "new settlements." In addition, editors of the English edition commendably amended the video which had erroneously referred to "settlements in the Palestinian territories." The video now accurately refers to "settlements in the West Bank." Furthermore, the erroneous reference to 700,000 Israelis living in settlements was corrected to 400,000. The Arabic video, however, was not corrected. 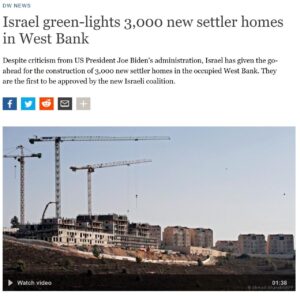 The Arabic subheadline, on the other hand, accurately states: "Israel intends to build about 3,000 homes for settlers in the West Bank in defiance of the strongest criticism to date on the issue from Joe Biden’s U.S. Administration.” 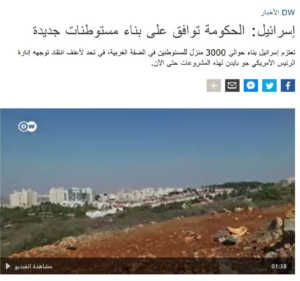 As CAMERA has repeatedly noted, “new settlements” (in plural) have not been a part of the West Bank’s political landscape for almost three decades, as construction of new residences is limited to pre-existing settlements. Amichai. approved in 2017, is the only “new settlement” in decades.

Though CAMERA Arabic has brought the erroneous Arabic headline to the attention of Deutsche Welle, the German media outlet has yet to correct.

Moreover, the designation of the West Bank as "Palestinian territories" is itself a correction-worthy error. The West Bank's rightful and ultimate disposition remains under contention, and so designation of the disputed West Bank as “Palestinian lands” is a violation of journalistic impartiality. Since 1967 and until the Trump plan, the West Bank’s status was to be resolved by negotiations anticipated by U.N. Security Council resolutions 242 (1967) and 338 (1973), the 1995 Israeli-Palestinian interim accords, the 2003 international “road map” and related diplomatic efforts taking 242 and 338 as reference points. The co-authors of resolution 242, U.S. Under Secretary of State Eugene Rostow, U.S. ambassador to the United Nations Arthur Goldberg, and British ambassador Lord Caradon made clear at the time and subsequently that Jews and Arabs both had claims in the territories, no national sovereignty over the territories had been recognized since the end of Ottoman rule and negotiations would be necessary to resolve competing claims.

Media outlets which previously corrected after erroneously referring to disputed West Bank as "Palestinian land" include Voice of America, The Wall Street Journal, The New York Times, The Los Angeles Times and The Washington Post.