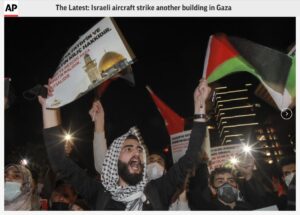 “The Latest” is an Associated Press feature which provides the day’s collection of brief updates about a large, developing event. Today’s “The Latest: Israeli Aircraft Strike Another Building in Gaza” is a collection of all that is wrong with the news agency’s coverage of Hamas attacks on Israel, and Israel’s retaliatory airstrikes. The following analysis is styled after “The Latest” format, with short entries about the AP’s tilted coverage. (The city cited at the beginning of each brief indicates where the item was written.)

MODIIN — The roundup begins with five paragraphs on the Israeli airstrike overnight on a nine-story building in Gaza City. While it notes that the building “houses residential apartments, medical production companies and a dental clinic,” it omits the fact that the army identified it as the location of a Hamas control center, which is the reason why Israel hit that particular building.

As AP Jerusalem bureau chief reported about the same strike in a separate article today (“Israel, Hamas escalate heavy fighting with no end in sight“): “Israel said the building housed Hamas intelligence offices and the group’s command responsible for planning attacks on Israeli targets in the occupied West Bank.”

CAMERA urges AP to add that key information into the “Latest” item as well.

MODIIN — AP’s “The Latest” includes an extremely misleading account of the chronology of violence Monday. It reports:

The fighting broke out on Monday after Israeli police used stun grenades, tear gas and rubber bullets against protesters at the Al-Aqsa mosque in Jerusalem. On Tuesday, Israel unleashed new airstrikes on Gaza while militants barraged Israel with hundreds of rockets. The exchange killed a number of militants and civilians in Gaza and at least three people in Israel.

This highly selective account fails to report the most significant event which brought us to the point where we are now: Hamas’ barrage of rocket fire on Jerusalem and surrounding areas Monday night, along with attacks on the communities close to the Gaza Strip. It is those rocket attacks which precipitated Israeli air strikes.

As for police use of stun grenades, tear gas and rubber bullets, it was in response to protesters who “pelted police with rocks and bottles,” as AP previously reported.

MODIIN — Both “The Latest” and Federman’s AP piece today omit important reported background on the Arab killed in Lod. “The Latest” twice refers to the incident: “an Arab man allegedly killed by a Jewish resident in central Israel.” Israeli media outlets report that it is being investigated whether the Jew shot the Arab in self-defense. Haaretz, for instance, reported:

One possibility being investigated is that he was shot by residents after Arab rioters threw stones at Jewish homes, tore down traffic signs and set objects on fire.

A video of the event shows people running towards a car, one with a firebomb in hand, followed by gunshots and screams of “Allahu akbar.”

Local resident Meir Layosh said that the mob tried to break into homes while the police took a long time to arrive. “The residents shot into the air before the mob, which didn’t divert them, until [the residents] shot towards them and two of the rioters were wounded.” . . .

Yoel Frandberg, a Lod resident who was there, said “It was terrifying. If they hadn’t opened fire, [the rioters] would have gotten into our houses.” He added that their likely target was a group of buildings housing members of Garin Torani, a religious Zionist group that sets up communities in underdeveloped areas.

Frankenberg told Haaretz that a few dozen masked Arab men gathered on the nearby Hahashmonaim Street and started setting trash cans on fire.

“We couldn’t walk around there, it was clear that we were their target.” Frankenberg said that he and his neighbors called the police dozens of times over 40 minutes, but they did not come.