The Associated Press’ photo essay today, “War’s trauma apparent in portraits of Gazan children,” features the personal stories of a number of Gaza children traumatized by Hamas’ conflict with Israel in an egregiously partisan and defamatory manner highly reminiscent of The New York Times’ “They Were Only Children” toxic front-page anti-Israel item last month.

Like their colleagues at The Times, AP’s Aya Batrawy and Felipe Dana falsely identify Israel as virtually solely responsibility for the children’s trauma, all but ignoring Hamas’ role in the tragedies:

Altogether, 66 children were killed in the fourth war on the Gaza Strip — most from precision-guided Israeli bombs, though in one incident Israel alleges a family was killed by Hamas rockets that fell short of their target.

“Where when war erupts, there is no safe place,” the AP article states, without providing any indication whatsoever that Hamas and other terror groups fire at Israel from densely population neighborhoods, twice endangering their own population by 1) inviting return fire — (while Israel’s targeting of rocket-launchers embedded in civilian areas is permitted under international law, the terrorists’ indiscriminate firing of rockets towards Israeli civilians from civilian areas is a double war crime) — and 2) risking rockets that fall short. Hamas also stores weaponry among civilians and houses its command offices in residential areas, a fact acknowledged by Hamas leader Yahya Sinwar.
Moreover, while Hamas has built hundreds of kilometers of well-fortified tunnels for its fighters, including under civilian homes, it has not provided any shelters for its civilian population. All of this information is highly relevant to a report on the lack of safe places for Gaza’s population, and yet AP omits it.
By citing “precision-guided Israeli bombs,” while ignoring the Hamas sites that Israel was targeting when some of these children were killed, AP falsely defames Israel with committing a heinous war crime: targeting children with precision bombs.
In addition, contrary to AP’s claim that “in one incident” Israel “alleges” a Hamas rocket was responsible for killing Gaza’s children; Israel has said that 680 misfired rockets launched by Gaza terrorists killed 10 children in at least two separate incidents and has also pointed to additional incidents in which fatalities of minors likely were caused by misfired rockets. The Meir Amit Intelligence and Terrorism Information Center detailed casualties inflicted by the misfired rockets fired May 10, hitting the Al-Omari Mosque in Jabalia, and on May 10, striking the al-Masri home in Beit Hanoun.
The Meir Amit report also indicates additional cases in which misfired Palestinian rockets were suspected in minors’ deaths:
Significantly, it’s not only Israel which “alleges” that some children were killed by misfired Palestinian rockets. Defence of Children International – Palestine acknowledged two children were killed by “a homemade rocket fired by a Palestinian armed group” in the Al-Omari mosque incident; 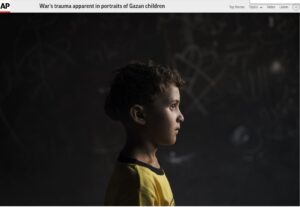 Qasim al-Masri lose several relatives when a misfired Hamas rocket hit his home May 10, Israel said. AP: “It’s not clear whether the rocket was fired by Israel or Hamas.”

Regarding the al-Masri incident, in which six children were killed, AP’s story today states: “It’s not clear whether the rocket was fired by Israel or Hamas.” It’s worth noting that DCI-Palestine also acknowledges that a misfired Palestinian rocket was possibly at fault. According to the Meir Amit center, at the time of the incident, the IDF had not yet launched its operation when the al-Masri home was hit, and therefore Israeli fire was not responsible for the deadly strike.
In addition, the  AP article, like The Times libel before it, egregiously fails to acknowledge that some of the minors killed were members of terror organizations, such as 17-year-oldKhaled al-Qanau, and Muhammad Suleiman, 15, of Hamas.
The wire service article and photo essay likewise ignores that many were killed because of theirproximityto Hamas member, such as Lina Sharir, 15, who was killed alongside her father Iyad, a Hamas commander in the anti-tank units; Hala Hussein Rifi, 13, and Zaid Mohammad al-Talabani, 5, killed alongside Hamas commander Wael Issa; and so on.
CAMERA has communicated with AP concerning these errors and shortcomings. Stay tuned for any updates.
See also “How Many Gaza Palestinians Were Killed By Hamas Rockets in May? An Estimate“
Donate Now