For the second week in a row, the front page of the New York Times featured an article that either provided fuel for antisemitism or sanitized those who have been accused of it.  Both articles extended far beyond the kernels of truth they were centred on: The first, highlighted on September 11, was a 6000+-word article that ostensibly exposed the shortcomings of the secular curriculum offered by private Hasidic schools. It was littered, however, with insinuations and innuendo which, in the absence of precise evidence or context, tapped straight into antisemitic tropes about Jewish money grubbing and exploitation of non-Jews.  (See: “How NYT-Style Advocacy Journalism Can Fuel Antisemitism”)

Then, a week later (Sept. 18 online, Sept. 19 print), a 4000+-word featured story by Ellen Barry headlined “How Russian Trolls Helped Keep the Women’s March Out of Lockstep” purported to expose the role of Russian disinformation in dividing the Women’s March protest movement. Beyond addressing the problem of the Russian campaign, however, the article downplayed the antisemitism of Women’s March leaders, particularly that of Linda Sarsour, and completely whitewashed the Boycott, Divestment and Sanctions (BDS) movement she promotes.

Depicting Sarsour as the victim of Russian disinformation, the story begins by emotively recounting how Sarsour awoke one morning, “glanced at the internet and felt sick.”  Beleaguered by “a torrent of focused grievance that targeted her,” Sarsour asked, “’Do they really hate me that much?’”

Readers are informed that Sarsour is a longtime “activist, largely advocating for the rights of Muslims”  who was likely singled out for online attacks because her “hijab marked her as an observant Muslim.” The message? Sarsour was the victim of Islamophobia in a Russian campaign that circulated “damning, often fabricated” narratives about her. Readers are told of the losses Sarsour suffered as a result:

“[Sarsour] is seldom invited to national platforms these days, and when she is, protests often follow. Whatever buzz there was around her as a future political candidate has quieted. She knows how she is seen, as a polarizing figure. She has adjusted to this reality, and sees herself more as an activist, in the mold of Angela Davis.

‘I’m never going to get a real job,’ at a major nonprofit or a corporation, she said. ‘That’s the kind of impact that these things have on our lives.’”

The article appears to be an attempt to rehabilitate Sarsour’s toxic reputation by presenting her as a tragic victim of Russia’s interference. And while reporter Ellen Barry acknowledges that some criticism of Sarsour was also “organic,” she implies that it came primarily from “pro-Israeli politicians” or Democratic supporters of Israel over Sarsour’s “criticism” of the Jewish state and her support of a Palestinian rights group  – which is how the reporter characterizes the antisemitic BDS movement.

“[Featuring Linda Sarsour at a Sanders campaign event] troubled pro-Israel politicians in New York, who pointed to her support for the Boycott, Divestment and Sanctions movement, which seeks to secure Palestinian rights by isolating Israel. Critics of the movement contend that it threatens Israel’s existence.” [emphasis added]

Asserting as fact in her reporter’s voice that the BDS movement “seeks to secure Palestinian rights,” Barry suggests that its threat to Israel’s existence is just an argument used by opponents to discredit the movement.

Paul Larudee, treasurer of the Association for Investment in Popular Action Committees, a funding corporation for BDS groups and activities, explains:

“Our corporation boycotts all Israeli products and services, and encourages other institutions, companies and individuals to cease and avoid all economic, academic and cultural activity that supports the racist state of Israel until that state dissolves itself, welcomes all Palestinians to return to their homes, restores all of their property and pays damages for the harm it has done to Palestinians and their property.” [emphasis added]

“That [the real aim of BDS is to bring down Israel] should be stated as an unambiguous goal. There should not be any equivocation on the subject. Justice and freedom for the Palestinians are incompatible with the existence of the state of Israel.”

What Else is Concealed From Readers?

While Barry does acknowledge that “Sarsour came with a track record — and with baggage” and quotes a progressive rabbi who claims that criticism of Sarsour has often been the result of Sarsour’s saying “something inflammatory and ultimately indefensible,” the reporter never informs readers exactly what is contained in Sarsour’s baggage, or what is construed as “inflammatory” and “indefensible.”

So here are some examples.

Sarsour has tried to stoke racial tensions in the U.S. by falsely implying that those who support Israel  support massacres of Palestinian people and murders of black people:

She similarly promotes  the BDS-JVP “Deadly Exchange” libel – a campaign of disinformation which blames both Israelis and American Jews for what it calls “racist policing in the U.S.” According to Sarsour:

[The ADL] takes police officers from America, funds their trips, takes them to Israel so they can be trained by the Israeli police and military, and then they come back here and do what? Stop and frisk, killing unarmed black people across the country.” (Sarsour at the Islamic Society of North America National Convention, Aug. 31-Sept. 2, 2018)

One of the oldest antisemitic tropes is the charge of Jewish supremacy.  It formed the basis of the notorious antisemitic Protocols of the Elders of Ziyon and was a mainstay of Nazi rhetoric.

Ask [progressive Zionists] this, how can you be against white supremacy in America and the idea of being in a state based on race and class, but then you support a state like Israel that is based on supremacy, that is built on the idea that Jews are supreme to everyone else? (Annual Conference of American Muslims for Palestine, Nov. 29, 2019)

After extensive pushback, Sarsour tried to walk back her comments by claiming that she was just referring to Israel’s nation-state law.

It is not only Sarsour’s rabble-rousing statements but her tweets, as well, that express vile hatred of Jewish nationalism, the Jewish state and its supporters.   She attacks Zionism in malevolent terms, echoing the infamous 1975 “Zionism is Racism” UN General Assembly resolution which was subsequently revoked. 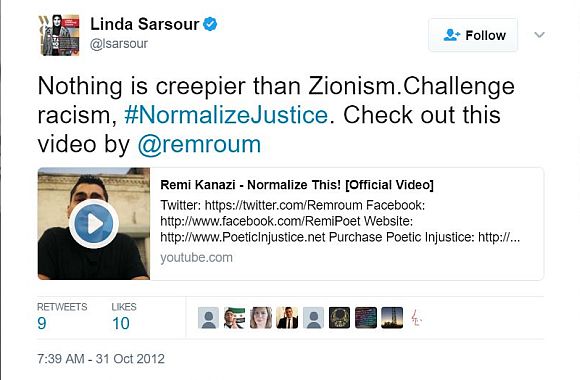 She attacks US politicians who support Israel, in language evocative of conspiratorial anti-Semitism: 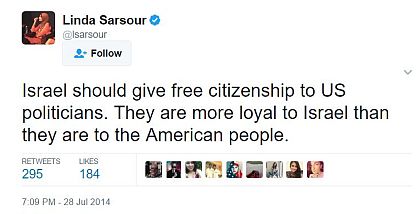 And she attacks those who support Israel as disgusting, justifiers of murders. She claims not to justify murders, but Sarsour justifies and embraces Rasmea Odeh, a murderer of Jews.   Odeh was a PFLP terrorist convicted for her role in a supermarket bombing in Jerusalem that killed two Jewish university students. After being released from prison in a prisoner exchange, she immigrated to the U.S. under false pretenses and was subsequently deported.  Sarsour expressed great admiration for her and campaigned for her to stay in the US. It is the sort inconsistency that has marked Sarsour’s career: She displays malevolent hatred toward the Jewish state and its supporters while accusing them of being the ones who harbor malice toward Islam, Muslims, Palestinians or whatever other cause she is espousing on any given day. In 2011, for example, she posted a vile tweet against feminists who criticized certain misogynistic practices among some Muslims. That tweet was later scrubbed from her twitter feed, but is still preserved in archives and screenshots. Sarsour suggested that these feminist do not “deserve to be women” and attacked them in crude and mysogynistic terms. 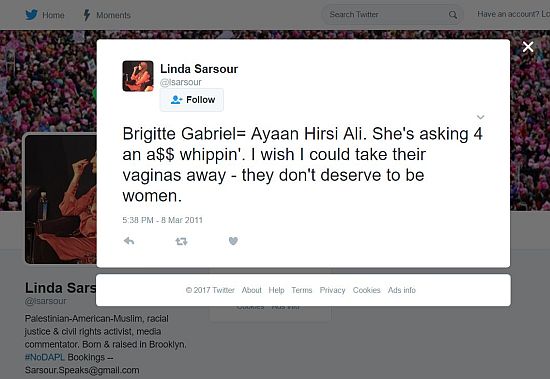 It is this exclusion of anyone who does not share all her positions – be they Jews who do not publicly denounce Israel or feminists who criticize misogyny in Arab countries –that contributed to fissures in the progressive Women’s March movement – that, as well as the affiliation of co-chairs Linda Sarsour, Carmen Perez and Tamika Mallory with the notoriously anti-Semitic Louis Farrakhan and his Nation of Islam.  The NYT reporter mentions the Farrakhan aspect fleetingly, but attempts to justify the refusal of Women’s March co-chair Tamika Mallory to forthrightly condemn Farrakhan for his open antisemitism. The reporter tries to explain:

Ms. Mallory grew up in Harlem, where many viewed the Nation of Islam and its founder positively, as crusaders against urban violence. Pressured to disavow Mr. Farrakhan, she refused, though she said she did not share his antisemitic views. After her son’s father was murdered, she explained, “it was the women of the Nation of Islam who supported me.”

“I have always held them close to my heart for that reason,” she said.

For more accurate and serious analyses of the dissolution of the Women’s March see here and here. The New York Times account with its excuses, its mischaracterization of BDS and its failure to specify Sarsour’s actions that elicited condemnation appears to be more the type of advocacy journalism that whitewashes and normalizes both antisemitism and its practitioners.

Note for the record: This author is not a Russian troll nor has ever had any ties to Russia.