Not for the first time, AFP this weekend botches captions about Israeli-Palestinian violence. In an unprecendented twist, however, the newest flubbed captions whitewash Israeli violence. Earlier erroneous captions blamed Israel for violence which, in one case, didn’t happen, and which in the second, was actually Palestinian violence.

First, we’ll begin with the new material. On Friday, May 3, AFP published the following photographs and captions misidentifying Israeli stone-throwers as Palestinian:

DEIR JARIR : Palestinians, whose faces are covered, prepare to throw stones during clashes with Israeli security forces and settlers from the nearby settlement of Ofra following a demonstration against the expropriation of Palestinian land by Israel on May 3, 2013 in the West Bank village of Deir Jarir, northeast of Ramallah . AFP PHOTO/ ABBAS MOMANI

DEIR JARIR : Palestinians throw stones during clashes with Israeli settlers from the nearby settlement of Ofra following a demonstration against the expropriation of Palestinian land by Israel on May 3, 2013 in the West Bank village of Deir Jarir, northeast of Ramallah . AFP PHOTO/ ABBAS MOMANI

The three men pictured in the top photograph, who also appear in the background of the second photograph, are Israeli stone-throwers, not Palestinian. Their ritual fringes (“tzitzit”) are clearly visible in the first photograph.

Other photo services have correctly identified the two sides — Israeli (background) and Palestinian (foreground) rock-throwers. The AP photo, published this photograph of the same scene, along with the following caption:

Masked Jewish settlers, background, and Palestinians, foreground, hurl stones during clashes near the West Bank village of Deir Jarir near Ramallah, Friday, May 3, 2013. Tensions are high in the West Bank, captured by Israel in the 1967 Mideast war and claimed by Palestinians as part of their future state. (AP Photo/Majdi Mohammed)

Likewise, there is this APA Image which correctly identifies the rock-throwing Israelis in the background:

Masked Jewish settlers, background, and Palestinians, foreground, hurl stones during clashes following a protest against settlement’s expansion and settlers attack near the West Bank village of Deir Jarir near Ramallah, Friday, May 3, 2013. Tensions are high in the West Bank, captured by Israel in the 1967 Mideast war and claimed by Palestinians as part of their future state. Photo by Issam Rimawi/APAIMAGES_1216.03/Credit:Issam Rimawi/Apaimages/SIPA

Yesterday, the English edition, apparently relying on the inaccurate AFP caption, published the photograph on page 4 with an incorrect caption.

In addition to the fact that the men in the background throwing rocks are Israeli, the Ha’aretz caption wrongly dates this scene to Saturday, when it took place a day earlier, Friday. Editors apparently confused it with a different clash, described in the accompanying article by Chaim Levinson and Gili Cohen, which did take place Saturday.

CAMERA has contacted editors both at Ha’aretz and AFP to request clarifications.

Unfortunately, in the earlier cases of AFP erroneous photo captions, the wire service failed to adhere to professional standards by setting the record straight.

Last fall, a number of news agencies published a series of images showing Egyptian Prime Minister Hesham Qandil and Hamas Prime Minister Ismail Haniyeh posing with the corpse of a four-year-old boy, Mahmoud Sadallah. Many of the images distributed by the various photo agencies originated from AFP pool coverage, and were photographed by AFP’s Mahmud Hams. According to wire photo captions from AFP, Reuters and Associated Press, as well as a CNN broadcast by Sara Sidner, the young Sadallah was killed in an Israeli air strike. See, for instance, one of the Hams’ photos from that series: 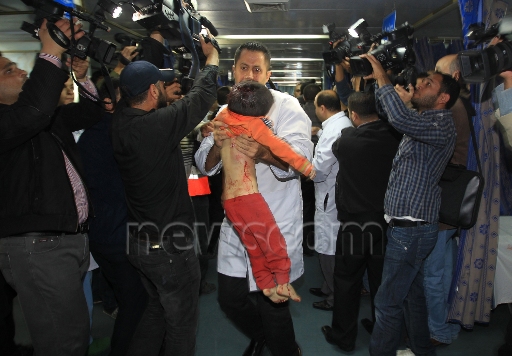 A Palestinian doctor carries the body of a baby boy who was killed in an Israeli air strike in Gaza City on November 16, 2012 during the visit to the al-Shifa hospital by the Hamas leader in the Gaza Strip Ismail Haniya and Egyptian Prime Minister Hisham Qandil (unseen). AFP PHOTO/MAHMUD HAMS/POOLMAHMUD HAMS/AFP/Getty Images

Yet, given Associated Press and New York Times articles which indicated that the boy had actually been killed by one of Hamas’ errant rockets, Reuters AP and CNN worked to set the record straight. In a November 2012 Op-Ed in the Times of Israel, this writer noted noted:

AFP alone did not respond to direct calls to correct or otherwise address the egregious misinformation. AFP Jerusalem bureau chief Philippe Agret and photo editor Marco Longari did not lift a finger to correct the record even when they were informed that the Telegraph reported that “experts from the Palestinian Centre for Human Rights who visited the site on Saturday said they believed that the explosion was caused by a Palestinian rocket.”

This is the second time this year that AFP has refused to clarify a photo caption which falsely blamed Israel for a Palestinian casualty despite an abundance of contradictory information.

In the first erroneous photo caption of 2012, AFP went to great lengths to evade correcting the following unfounded caption:
An injured Palestinian construction worker screams in pain after an Israeli army driver drove a trailer hooked to a tractor over his legs, as he tried to block him when Israeli forces stopped workers on January 25, 2012 from building a house in al-Dirat village, south of Yatta in the southern Bank town Hebron region. The Israeli forces were seizing the equipment and trailer from the construction workers as the site falls in the occupied zone C in which Israel prevents Palestinians from building on their land.

After checking Palestinian, international and Israeli sources, it seems that the “injured worker,” Mahmoud Abu Qbeita, was, in fact, not actually injured. Moreover, there is no evidence that he was even run over. The Palestinian Center for Human Rights and the United Nations’ Office for the Coordination of Humanitarian Affairs, both of which provide comprehensive reports about all West Bank injuries, made no mention of the alleged injury.

On the Israeli side, spokesman Capt. Barak Raz said soldiers were on site to protect Civilian Administration officials who were confiscating Palestinian construction equipment in an area not permitted for building. Abu Qbeita was on the ground blocking the trailer when he started screaming that he had been run over, although no one saw it happen. Initially, Abu Qbeita complained his left leg was injured. After an army medic’s examination found no wound, Abu Qbeita then claimed his right leg was injured. Raz said that the Palestinian Red Crescent likewise found nothing wrong with him.

Presented with this information, AFP Jerusalem bureau chief Philippe Agret angrily responded that because several media outlets were on the scene, including Palestine TV, Pal Media, and Al Quds TV, Abu Qbeita could not possibly have faked being run over. The AFP also claimed to have viewed footage of Abu Qbeita being carried away on a stretcher, but does not claim to have seen footage of him being run over.

Agret unwittingly drew attention to a key point: of the several photographers on site who were snapping away, not one has released a single image of Abu Qbeita as he was being run over.

While the Wall Street Journal commendably clarified the controversy behind the circumstances of the photograph, and MSNBC also addressed the controversy, AFP flatly refused to issue any clarification.
CAMERA urges the AFP to correct the current caption error, in which Israeli violence is wrongly identified as Palestinian, and to likewise publish belated corrections to the previous captions which wrongly attributed violence to Israelis. We hope that AFP shares CAMERA’s commitment to correct inaccurate coverage of Israel and the Middle East, regardless of whether it is Israelis, Palestinians or anyone else who are unfairly portrayed.

May 12 Update: Ha’aretz, But Not AFP, Publishes Correction on Israeli Stone-Throwers