Multiple international media outlets covering Israel’s announcement this week of a development plan for the Golan Heights uniformly note that Israel captured the strategic plateau from Syria in 1967 but failed to inform why.

Thus, the Associated Press report on Israel’s “multimillion-dollar plan meant to further consolidate Israel’s hold on the territory it captured from Syria more than five decades ago,” provided this truncated history lesson: “Israel captured the Golan Heights in the 1967 Mideast war and later annexed the territory, promoting settlement and agriculture there as well as creating a thriving local tourism industry” (“Israel plans to double settlement in Golan Heights“).

Reuters faired only marginally better with an opening paragraph citing “the territory [Israel] occupied in fighting with Syria in 1967” (“Israel sets goal of doubling number of Jewish settlers on Golan Heights“). While at least noting that the Israeli capture of the territory came about in the context of fighting, no additional information is forthcoming.

AFP also refers to “the territory captured from Syria” while skipping over the reason for Israel’s capture from the Golan Heights (“Israel approves plan to double settlers in occupied Golan“). 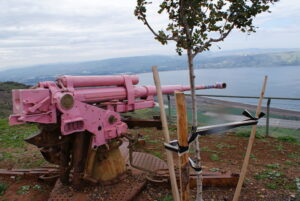 A Syrian gun used to attack Israeli civilians in the Jordan Valley prior to 1967, from the high point of Mevo Hama, Golan Heights, where Israel’s Cabinet met this week to announce a development plan for the strategic area (Photo by Hadar Sela)

Here’s the missing essential history that the wire agencies could have included in one simple sentence: From 1948 until 1967, Syria used the Golan Heights as a military stronghold from which to attack Jewish communities in the Hula Valley.

Until 1967, this was the site of a large Syrian military post named Murtafa which dominated the Hula valley below. In particular, it was the source of repeated attacks on Kibbutz Gadot – established in 1949 on the site of the former moshava Mishmar HaYarden (established in 1890) which had been destroyed by the Syrians on June 10th, 1948 during the War of Independence. On April 7th, 1967 more than 300 Syrian shells fell on Gadot in 40 minutes. Two months later, as its residents were still busy rebuilding their homes, the kibbutz was once again destroyed by Syrian shelling.

During the years between 1949 and 1967, a generation of children who came to be known as the ‘shelters generation’ grew up in Gadot and many other nearby villages and kibbutzim and it was this difficult reality which led a delegation from the area to press the Prime Minister of the time, Levi Eshkol, to capture the Golan Heights during the last day and a half of the Six Day War.

As the sounds of war fell silent, the famous song about ‘a girl from Gadot’ was penned and when the Israeli forces reached the Syrian base of Murtafa, the commander Colonel Emanuel (Mano) Shaked sent a message to the people of Gadot saying “From here you look seven times greater” – a tribute to their ability to withstand 19 years of Syrian attacks.

A look back at The New York Times archive from that period gives a taste of the constant Syrian barrages targeting Israel’s northern residents and farmers for 19 years, launched from the strategic heights.

. . . the Israelis said a cotton warehouse in the Gadot communal farm near the Hula Valley had burned after it was hit by a Syrian shell. Artillery shells also hit of Hulata, it was reported. . . .

An Israeli complaint to United Nations truce supervision headquarters said the trouble started when troops in Syrian positions dominating the Hula Valley fired a machine-gun burst this morning at a tractor plowing land in Israeli territory south of the drained lake Hula.

Just before 2 P.M., the Israelis said, the Syrians attacked the tractor with a machine gun.

It’s not that the Associated Press was never aware of the pre-1967 history of Syrian aggression from the Golan Heights targeting Israeli civilians living in the Hula Valley below. Nor did the leading wire service always ignore the critical history.

It was from the slopes of Mount Hermon that the Syrians pounded the Hula Valley below. A generation of Israelis was raised on visits to war memorials like the one next to the road winding up to the ski resort, where 50 soldiers fell in 1973 making sure Israel would not be threatened from the heights.

In failing to report the ongoing Syrian attacks from the Golan Heights which prompted Israel’s capture of the strategic territory, media outlets falsely depict a belligerent Israel stealing land from a peaceful neighbor in a land-hungry bid to build more “settlements.”