The headline can use improvement. AP’s headline presents events in reverse chronological order, starting with Israel’s retaliatory strike on Hamas position, followed by the initial Hamas aggression which had prompted the Israeli response.

The AP’s inconsistency in adequately identifying the subjects is also objectionable. “Israel strikes” is clear: Israel is the actor. “Gunfire wounds” is less clear. Whose gunfire? It’s Hamas’ gunfire, but AP doesn’t say. Why the double standard? Nor does AP’s headline identify the wounded civilian as Israeli.

The accompanying article also buries the chronology of events and their causal relationship.

An Israeli and three Palestinians were wounded on Wednesday in the first exchange of fire in months on the Gaza frontier. The violence came as Israel announced measures aimed at improving living conditions in the occupied West Bank after a rare meeting of top officials. 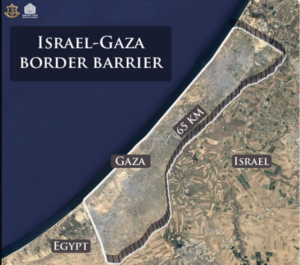 Not until the third paragraph does the article disclose that the unspecified “exchange of fire” began when Hamas fired on an Israeli civilian on Israel’s side of the border.

The Israeli military said a civilian near the security fence was lightly wounded by gunfire from Gaza, and that it responded with tank fire at multiple military positions manned by the Hamas militant group, which has ruled the territory since 2007. The Gaza Health Ministry said three Palestinians were wounded, without saying if they were civilians or fighters.

Separately, the AP story (reprinted in The Los Angeles Times) whitewashes the heinous terrorist acts of Palestinians killed or imprisoned while carrying out attacks. AP reports:

Israel has withheld funds over the Palestinian Authority’s payment of stipends to thousands of families with relatives killed, wounded or imprisoned in the conflict. Israel says the payments incentivize terrorism, and the Palestinians say they provide crucial support to needy families.

Behind the screen of casualties euphemistically described as killed or wounded “in the conflict,” AP obscures the indisputable reality that the Palestinian Authority annually pays hundreds of millions of dollars to terrorists and their families. At best, it casts the reality of the payments for terrorists as a disputed Israeli claim (“Israel says”) about incentivizing terrorism. But, as an infamous CAMERA-prompted New York Times correction made clear in 2018:

In fact, Palestinian officials have acknowledged providing payments to the families of Palestinians killed while carrying out attacks on Israelis or convicted of terrorist acts and imprisoned in Israel; that is not a conspiracy theory.

Terrorists who benefit from these payments, either posthumously via financial support to their relatives, or in their own lifetimes, have carried out the most heinous crimes, such as the murder of civilians, including children.

Moreover, the Palestinian Authority dolls out stipends proportional to the length of the prison sentence. In other words, the more severe the crime, the more generous the payment. This concealed information belies the Palestinian argument cited by AP that the payments “provide crucial support to needy families.” Financial support for needy families is determined on the basis of need. Financial support for terrorism is determined on the basis of the severity of the terror attack. PA payments to terrorists and their families are determined by the latter, a key piece of information that AP withholds.

AP’s penchant for concealing Palestinian culpability — first in coverage of Hamas’ cross-border attack, then in the payments to murderers and other terrorists — is writ large in its depiction of Israeli rejectionists versus Palestinian pursuers of peace.

Israeli Prime Minister Naftali Bennett is opposed to Palestinian statehood. His government has shown no interest in reviving peace talks but has said it wants to reduce tensions by improving living conditions in the West Bank. …

Gantz’s meeting with Abbas — the second in the six months since Bennett’s coalition government took office — also drew vocal criticism from Israeli opposition lawmakers, including those from former prime minister Benjamin Netanyahu’s Likud party, the largest in parliament. They fear the new government is preparing to make broad concessions to the Palestinians.

Palestinians, on the other hand, are the seekers of peace, according to the AP account:

But Hussein Sheikh, a top aide to Abbas, said Israeli goodwill gestures must be accompanied by a political horizon leading to a peace agreement.

In a post on Twitter, he called the meeting “the last chance before the explosion” and said Abbas had taken a “serious & bold attempt to a political path based on international legitimacy.” …

The Palestinians seek an independent state that includes all of the West Bank, east Jerusalem and the Gaza Strip, areas Israel captured in the 1967 Mideast war.

Here, AP is following its well–established pattern of ignoring the series of Israeli offers of Palestinian statehood that Palestinians have spurned over many years.

As Khaled Abu Toameh reported in The Jerusalem Post:

Hamas leaders and spokesmen were among the first to attack Abbas for meeting with Gantz.

A cartoon published by Hamas-affiliated websites shortly after the meeting featured Abbas washing the feet of Gantz, who appears in military uniform, reference to his former job as IDF Chief of Staff.

Hamas and other Palestinian factions held an emergency meeting in the Gaza Strip and expressed their rejection and denunciation of Abbas’s meeting with Gantz.
The factions said that the meeting “targets West Bank rebels and their resistance and puts in place mechanisms to intensify security coordination” between the PA security forces and the IDF. …
In a separate statement, Hamas condemned the meeting as a “stab to the intifada (uprising)” in the West Bank.

In short, AP continues to report according to the rubric of “contextualized truth” in which “Israel’s oppression of Palestinians” necessitates the downplaying, justification or erasure of all Palestinian wrongdoing. Nevertheless, for some at The Los Angeles Times, the AP’s tendentious advocacy journalism does not go far enough.