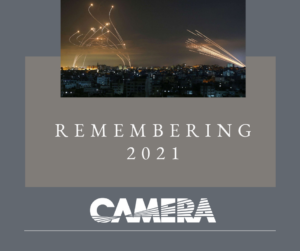 As we move into a new year, it’s worth recalling the intense global focus on Israel during the past twelve months and CAMERA’s interventions to promote fair and factual treatment of the Jewish state. 2021 saw both serious challenges and inspiring victories that shouldn’t be forgotten.

There were libels about Israel’s response to the pandemic; reckless misinformation about Hamas’s rocket war against Israeli civilians; blistering anti-Israel lies on social media platforms; Ben & Jerry’s foolish boycott – mangled in the media telling; eruptions of antisemitic violence in cities across Europe and America, some tortuously obfuscated and denied in influential news outlets.

Even one of our own staff got mobbed, spat at, cursed, shoved, and threatened at a “Students for Justice in Palestine” rally in Boston.

Much of the mayhem and bullying was fueled by a media and academic establishment that seemed intentionally to spin the worst about the Jewish state and flagrantly to duck telling the full truth about anti-Jewish bigotry.

Over the summer, for instance, 500 journalists from some of America’s most prestigious news companies unabashedly signed an open letter that demanded that news coverage of the Israeli-Palestinian conflict be filtered through the distorting prism of “Israel’s military occupation and its system of apartheid.”

Such loaded language echoed the “apartheid” rhetoric from mendacious NGOs such as B’tselem and Human Rights Watch, two organizations whose outrageously false reports CAMERA debunked (here and here) at the start of the year.

The blatant disregard for traditional journalistic ethical codes, as detailed in CAMERA’s own open letter, led to one of the most dishonest years in American journalism. As evidence of this, CAMERA broke its record for prompting media corrections.

Our research staff had to be relentless in calling out misinformation, contacting editors, and setting the record straight — in the end, eliciting at least 233 corrections from the world’s most influential news agencies. Our British department, for instance, was absolutely dogged in getting corrections from the seemingly ever-more anti-Israel BBC.

Even Scientific American was infected by the rot of bias and error. At one point, the prestigious science magazine published an article used as a petition to promote the BDS movement. After CAMERA’s intervention, the magazine issued an Editor’s Note, saying, “This article fell outside the scope of Scientific American and has been removed.”

Toward the start of the year, MSNBC host Mehdi Hasan signaled the worsening journalistic ethos by utterly failing to challenge U.S. Congressman Ro Khanna’s outrageous libel that Israel is “burning down Palestinian villages.”

Our staff were quick to do what Hasan would not: challenge the inflammatory falsehood, ultimately prompting Rep. Khanna to praise CAMERA’s work: “I actually genuinely respect the work you do,” he tweeted at us. “It’s public discourse like this that makes our democracy stronger. I didn’t speak precisely enough and it’s obviously a very complicated situation. So your initial criticism was fair and I always appreciate the engagement.”

Another major victory in the battle for truth was our prompting PBS to shelve a scheduled documentary that had been doctored to defame Christian supporters of Israel, their Israeli friends and American officials. PBS took action after we exposed the filmmakers’ shocking manipulations of a major presidential address. CAMERA also alerted the score of film festivals screening the fraudulent documentary – and we publicized on Israeli television the facts about the film’s Israeli director and her unethical work.

CAMERA also secured a Forward Editors’ Note after the far-left Jewish outlet published an op-ed promoting the egregiously false claim—widely used to slur Israel—that Israel’s vaccine program discriminates based on ethnicity. The full-throated retraction underscored the truth: Israel vaccinates all its citizens and residents regardless of their ethnicity, race, or religion.

Then came tensions in the Jerusalem neighborhood known as Sheikh Jarrah. The decades-old real estate dispute was cynically spun into a click-bait media story of Israeli government “ethnic cleansing.” CAMERA provided the sober facts in a widely read article that exposed the many lies about this complex legal case.

Similarly, activists and journalists tried to paint an alarming picture of Israeli religious intolerance. Thus, for instance, we prompted CNN Arabic to correct its false claim that Jewish visitors to the Temple Mount were “settlers” who “stormed” the “Al Aqsa Mosque.” In a similar vein, CAMERA shined a light on falsehoods that recast Palestinian rioting as defensive actions against unprovoked Israeli attacks during Ramadan. These falsehoods were dangerous, helping to spark antisemitic passions around the world.

In May, when Hamas began firing thousands of rockets into Israeli towns, misinformation penetrated even deeper into the public discourse, a truly astonishing tsunami of lies. Bloomberg News even defended Hamas by absurdly claiming that its past suicide bombing attacks were a result of a blockade on Gaza. CAMERA continually disproved such defamation and ensured the falsehood was removed.

We also produced a groundbreaking mathematical study of the number of Palestinians killed by errant Hamas rockets – 36% of the alleged Palestinian death toll — during the May conflict. In another study, we showed that decades-long trends of rising Palestinian life expectancy, declining infant mortality, growing populations, increased water supplies, and comparatively low casualty rates disproved the incendiary, absurd claims that Israel was committing genocide, was guilty of ethnic cleansing, or was undermining healthcare.

These studies helped to empower our CAMERA on Campus fellows to fight back against the lies told on their campuses. At colleges and universities across the world, they were holding workshops, webinars, hosting speakers, and writing pro-Israel articles in their college papers. Anti-Israel activists didn’t get a free ride, thanks to these brave students.

At the same time, we launched our new CAMERA Education Institute, which, among other things, expanded our campus work to focus on improving lessons about Israel in K-12 public education. One of our Institute’s first victories was the removal of a virulently anti-Israel lesson from a mandatory Native American curriculum in public schools in the state of Washington.

Before CAMERA’s intervention, children as young as 10 were being taught to associate the Native American experience with the Palestinians’ “fight to be free from Israeli dominance.” After we intervened, the Washington Office of Superintendent of Public Instruction admitted this was “a clear example of implicit bias” against Israel, thanked CAMERA for its work, and removed the lesson.

Alongside this work in public schools, CAMERA was responsible for exposing the sale of Holocaust denial literature and other Nazi books in mainstream American retail companies such as Target and Barnes & Noble. Company executives thanked CAMERA for spotting the books and removed the antisemitic texts from their online platforms.

Combatting bias at the New York Times also remained a key component of our activism this year. In July, we unveiled a giant new billboard outside the Times’s headquarters, taking chairman and publisher A.G. Sulzberger to task for fueling hostility towards Jews with his paper’s incessant, false and inflammatory depictions of Israel.

Most recently, CAMERA made waves with two memorable successes that pushed back against bias at the New York Times. One was CAMERA’s #SadSadIsrael social media campaign, which swept Israel after we lampooned the Times for depicting Israelis in overwhelmingly gloomy language—despite Israel consistently ranking among the happiest countries in global surveys.

Israelis began ridiculing the Times’s report by tweeting happy photos of themselves—at weddings, on hikes, at bars, on beaches, at concerts, in restaurants, enjoying family and friends—with the satirical hashtag #SadSadIsrael, which quickly shot to the number one slot for trending hashtags in the country.

Another important success against bias at the Times was an epic Editor’s Note issued after CAMERA uncovered a video that completely disproved their glowing portrayal of Refaat Alareer, a literature professor in Gaza, who was described as presenting Israeli poems in a positive light to “build bridges” between Israelis and Palestinians. The truth, as we showed, was that he was a hatemonger and thus nothing like what the Times wanted people to believe.

“Had The Times done more extensive reporting on Mr. Alareer,” the Editor’s Note concluded, “the article would have presented a more complete picture.”

All the above is only a brief snapshot of our work over this troubling past year. Our hope is that 2022 will be one in which journalists and academics recommit themselves to the values of accuracy, accountability and intellectual honesty – tenets of professionalism that sustain our democracy. But whatever comes, we’ll confront lies and liars and applaud the honorable voices that provide full and accurate information.

Thank you, as always, for joining CAMERA in this urgent battle for the hearts and minds of millions who can be misled by lies. Your invaluable partnership and support help us bring the antidote of truth!

If you would like to help us start out strong in 2022, please DONATE HERE.