Straight out of the starting gate, Jen Kirby’s Vox interview with Brent E. Sasley, meant to explain Israel’s stalled sovereignty plan,  gets the facts wrong on basic issues surrounding the disputed territory (“Israel’s West Bank annexation plan and why it’s stalled, explained by an expert).” In her introduction, Kirby, a foreign and national security reporter for Vox, erred:

Under the two-state framework historically supported by the United States and the international community, the vast bulk of the West Bank would be returned to the Palestinians. (Emphasis added.)

Prior to the Oslo Accords, bilateral agreements often regarded as important way stations on the road towards two states, never was any part of the West Bank under Palestinian administration, including before 1967. From 1948 to 1967, Jordan was in control of the West Bank and formally annexed it in 1950. Prior to 1948, the West Bank was under the control of the British Mandate. Before the British, the land was part of the Ottoman empire.
Voice of America recently corrected the very same point after wrongly stating in an editor’s note that West Bank land was under Palestinian administration prior to 1967.
In addition, National Geographic commendably published the following correction in December 2018 after making the identical error:

CAMERA informed Vox of the straightforward factual error. As of this writing, editors have yet to correct.

Interviewee Brent E. Sasley, a professor at the University of Texas at Arlington, tapped “to talk about the basics,” leaves out very fundamental information about the West Bank: that the vast majority of Palestinians – at least 90 percent – live under Palestinian government in Areas A (under full Palestinian Authority, civil and security, control) and Areas B (under PA civil control and Israeli security control.)

Thus, in the conversation, edited for length and clarity, Kirby opens:”an obvious place to start is: What is the West Bank?” Sasley responds:

Geographically speaking, it’s literally the west bank, uncapitalized, of the Jordan River. It’s become a convenient term to use when you don’t want to refer to “Palestine” or “Israel” or “Judea and Samaria” — the latter being terms that hark back to the ancient Jewish kingdom and which the Israeli government uses formally in all of its references towards the area.

Sasley notes differences of opinion of whether or not “West Bank” is a political term, and then avers that “most Israelis don’t see it as a separate territory.” Thus, he focuses variously on what he says are different perspectives, while at no point addressing the salient political realities: that the territory is divided into the aforementioned Areas A and B, along with C, which is under full Israeli control.

That includes a whole series of factors. Israelis build settlements in the West Bank, and then Israel has to then kind of take control of that area. But to do that, they end up building roads and infrastructure to hook these homes up to Israel proper.

And then there has to be security for those settlements. . . so you end up with this whole infrastructure there.

The “creeping annexation since 1967” narrative ignores the fact that in 1967, in a defensive war, Israel won full control of the West Bank, and in the 1990s ceded control of nearly 40 percent, including all of the large population centers where most Palestinian residents are concentrated. Thus, compared to July 1967, contrary to Sasley’s assertion, Israel now controls less of the West Bank, not more.

In addition to the settlements, Sasley points to the right of West Bank Palestinians to bring cases to Israel’s Supreme Court as an indication of “creeping annexation.” The term, he says:

also refers to the application of Israeli law in the settlements and often the surrounding areas. Palestinians in the West Bank have been able to use, in a limited way, the Israeli Supreme Court to dispute, for example, the route of the security barrier that Israeli built.

That Palestinians have the right to press their case in the Israeli Supreme Court “means,” he says, “that Israeli law is applied not just to the Israeli citizens but to non-Israelis citizens, as well,” and thus constitutes “creeping annexation.” But his argument is downright absurd. Palestinians have the right to petition Israel’s Supreme Court on issues that concern Israeli laws, policies or authorities: including Palestinian worker rights in Israeli settlements, the location of Israel’s security barrier, restrictions on access to West Bank land imposed by Israel, and the like.

When it comes to internal Palestinian matters however, within Areas A and B, where, again, most West Bank Palestinians live, their legal address is the Palestinian courts. The Palestinian judiciary, concealed by Sasley, is another by-product of the bilateral Oslo Accords, to which Israel is a party — another fruit, apparently, of alleged “creeping annexation.”

If the fact that West Bank Palestinians have the right to petition Israel’s High Court is an indication of “creeping annexation,” as Sasley claims, then does then the government’s 2018 move to restrict that right suggest retreating annexation? If so, then the legal situation, just like West Bank governance discussed above, points to receding Israeli control, not expanding Israeli control.

By arguing that due to “creeping annexation,” the West Bank has de facto already been annexed, as it is under Israel’s tight, controlling grip, Sasley twists himself into a pretzel he can’t undo. His dilemma is as follows: if the West Bank in practice has already been annexed, what’s the big fuss about a potential formal annexation? What actually would change? Indeed, despite the fact that annexation is already here, according to Sasley, he blunders on: “But annexation, particularly if it’s accompanied by sending settlers and troops to the West Bank or to the Jordan Valley, that would be a substantive change.” Sasley posits “substantive change” as explanation for probable “protests, demonstrations, maybe riots” in response to any move towards formal annexation.

Touching on this inherent contradiction in his positions (creeping annexation versus substantive change), Kirby reasonably asks him at one point:

Given this ambiguity, do we actually know how formal annexation could happen? Is it a matter of issue, like an order? Or do troops move in? Basically, how would we know that yesterday is different from today?

Kirby probes about Palestinian responsibility for the current situation:

What about the Palestinian response? What is their position, and is there anything Palestinians can do?

Conceding that “Palestinians are in an extremely weak position,” partly “because of decisions that they have made over time,” Sasley cites internal Palestinian division and security cooperation with Israel as Palestinian weaknesses (though abandoning the latter would also be harmful, he says).

The Palestinian failure that Sasley ignores is the perpetual rejectionism which has denied the Palestinians a state time and again including with respect to the 1947 Partition Plan, Ehud Barak’s 2000 Camp David negotiations, Ehud Olmert’s 2008 offer, finally and President Trump’s plan, in which the size of the proposed Palestinian state diminished in the wake of all of the other previously rejected offer.

Ignoring the option of Palestinians saying “yes” for a change, Sasley says of the Palestinians’ “much weaker position”:

I mean, they have been trying. They’ve been working at the international level, in international institutions, in the diplomatic and legal arenas. But there’s only so far that can go.

Sasley explicitly addresses some of the aforementioned plans, which he notes “didn’t work,” but he conceals that they didn’t work because the Palestinians said “no.” He says:

When Ehud Barak was the Israeli prime minister and participated in the discussions at Camp David and Taba at the end of the 1990s and in the 200s, he proposed swapping land. Israel would annex part of the West Bank, and the Palestinians would get some part of Israel. Back then, it was a very small amount that the Palestinians would get, but that idea is out there. (Emphasis added.)

Actually, according to the Clinton Parameters which emerged at Camp David, the plan would have seen 94 to 96 percent of the West Bank become a Palestinian state, with a territorial exchange within Israel equivalent to one to three percent of West Bank land.

Kirby introduced Sasley as an “expert on Israeli politics,” but minimal research prior to the interview would have raised a red flag. In January 2017, shortly before President Trump’s inauguration, Sasley penned an Op-Ed in Haaretz averring that American and Israeli interests are increasingly divergent, and that incoming President Trump would not or could not reverse the direction set by President Obama (“Increasing;y Supporting Israel No Longer Serves America’s Interests: Obama’s UN abstention was only the most recent manifestation of ongoing strategic changes that Trump too won’t want or be able to reverse“). 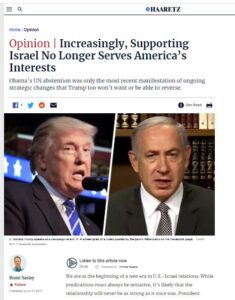 Critics and supporters of President Trump’s policies vis-à-vis Israel either abhor or adore his decisions, respectively. But both would agree that he opted for a very different path than President Obama. When Secretary of State Mike Pompeo announced that Israeli settlements are not per se in violation of international law, all observers understood that his move was an 180 degree pivot from the American abstention on United Nations Security Council Resolution 2334, which termed Israeli settlements “a flagrant violation under international law.”

Vox’s “explainer” at the time pulled no punches:

US Secretary of State Mike Pompeo announced on Monday that he is reversing a longstanding State Department legal opinion labeling Israel’s settlements in the West Bank at odds with international law. This new position sharply contradicts mainstream interpretations of the law, the historic US approach to the conflict, and the broader international community’s view of the situation.

Pompeo’s announcement about Israeli settlements was indeed a dramatic shift from Obama policy, though many media outlets, Vox included, had gone much further, falsely stating that it was reversal of decades of U.S. policy. (In fact, the Obama administration’s determination that settlements are illegal under international law was a departure from decades of U.S. policy which declined to rule on their legality. Pompeo’s announcement was a reversal of three years of policy under Obama’s administration.)  In any event, Sasley’s 2017 mistaken assessment that Trump would adhere to Obama policies on Israel would likely put off many media outlets searching out expert analysis. But Vox, which in the past invented a bridge connecting the West Bank and Gaza Strip and which has also adlibbed that Jordan had once ruled the Gaza Strip, either didn’t know or didn’t care.