In her May 12 “CBS This Morning” (7:00 am) coverage of Hamas’s indiscriminate rocket attacks on Israel and retaliatory Israeli airstrikes, CBS’ Elizabeth Palmer flips reality on its head. Her fallacious characterization of Hamas’ relentless firing as “retaliation” and “counterattack” says it all. 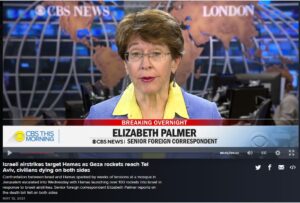 The blurb (screenshot at left) describing the broadcast faithfully summarizes Palmer’s looking-glass inversion of events: “Confrontation between Israel and Hamas sparked by weeks of tensions at a mosque in Jerusalem escalated into Wednesday with Hamas launching over 100 rockets into Israel in response to Israeli airstrikes.”

Of course, it’s the Israeli airstrikes on Hamas infrastructure that are in response to Hamas attacks on Israel’s cities; not the opposite.

Palmer’s sleight of hand rests on her gross omission of the fact that the violence involving Hamas in the Gaza Strip began Monday night with the terror organization’s rocket attacks against Jerusalem and southern Israel. The senior foreign correspondent kicked off her broadcast with this egregiously false chronology:

Well, this round of violence actually started weeks ago with an Israeli court order to evict some Palestinian families from their homes in East Jerusalem, but it really caught fire over the weekend just gone by when Israeli police clashed with Palestinian protesters around the very holy Al- Aqsa Mosque. Now, of course, it`s morphed into open war.

In making the absurd allegation that Hamas has fired hundreds of rockets at Israeli civilians due to a court preceding concerning the possible eviction of 31 tenants who refuse to pay rent, Palmer buys into the preferred narrative of Hamas, designated a terror organization by the United States, European Union, and Israel, among others. Nor is it true that there was “an Israeli court order to evict some Palestinian families from their homes.” The Supreme Court hearing scheduled for Monday (May 10) was postponed by 30 days given combustible tensions involving Palestinian violence in Jerusalem, the end of Ramadan, and Jerusalem Day, an Israeli holiday marking the 1967 unification of the city.

Her selective account of clashes at the Temple Mount, like other skewed media reports last week, ignores the violent Palestinian attacks on religious Jews in Jerusalem, uploaded on TikTok in order to incite additional violence, and the violent Palestinian attacks on Israeli police with rocks and fireworks, which prompted the Israeli police response in the Temple Mount compound.

In addition, Palmer casts doubt on the Israeli military’s singular mission to destroy Hamas and Islamic Jihad terror infrastructure, stating in a similar 4:00 am broadcast report:

With the insidious “officially” qualification, the CBS correspondent insinuates that it’s not actually the case that Israel’s military is targeting military infrastructure, promoting the Hamas falsehood that Israel targets civilians. In highlighting the heavy price paid by civilians in the Gaza Strip, Palmer ignores that Palestinian terrorists fire on Israeli civilian areas from within Palestinian neighborhoods, endangering its local population in two ways: 1) when Israeli bombs rocket launchers, rocket production facilities, command centers, drone and naval operations and more embedded within neighborhoods, civilians and their property are at risk despite extensive Israeli efforts to warn civilians with phone calls, text messages, and the “roof-knocking” method in which non-fatal missiles first target a building to warn the residents to evacuate; and 2) Palestinians civilians in the Gaza Strip are killed by misfired Palestinian rockets, as acknowledged by Defense for Children International Palestine, an organization reportedly affiliated with the PFLP terror group.

Palmer ignores that Israel calls off operations when it identifies children at the scene.

Fighting a terrorist organization that operates within civilian areas isn’t easy. Watch as IDF pilots call off a strike because children were there: pic.twitter.com/N8ycwqwgck

200 of those rockets exploded inside Gaza neighborhoods