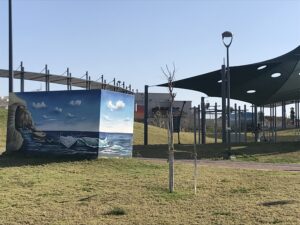 A shelter at a park in Sderot (Photo by Tamar Sternthal)

CAMERA Arabic has prompted correction of a EuroNews Arabic-language article which erroneously referred to the southern Israeli city of Sderot as a “settlement.”

The erroneous characterization appeared in both the headline (“An Israeli air strike on Palestinian sites in Gaza, after a rocket targeted the Sderot settlement”) and in the body of the April 16 article. The article stated: “The IDF announced on Friday morning that it carried out air strikes on Gaza in response to a rocket launched from the Strip towards the Sderot settlement, located north of the Strip, as (according to IDF) settlers took refuge in shelters.”

CAMERA Arabic contacted EuroNews, noting that Sderot is located within Israel’s internationally-recognized territory, and is therefore not a “settlement.” EuroNews commendably corrected the error on April 19, and the report now refers to Sderot as a “town.”

Based in Lyon, France, EuroNews labels itself “pan-European.” Its majority owner (88 percent) is Egyptian billionaire Naguib Sawiris, via his Média Globe Network. The remainder 22 broadcasters from Europe, North Africa (Egypt, Tunisia, Algeria and Morocco) and the Gulf (UAE), as well as French local authorities. 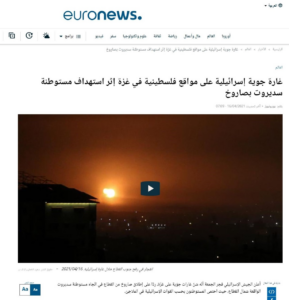 A screenshot of the article before it was corrected