If you thought that the Forward would take a break from its anti-Israel propaganda during a global health crisis, well, you thought wrong. Instead, it’s using the crisis as fodder.

Despite the fact that CAMERA has repeatedly exposed opinion-writer Muhammad Shehada’s falsehoods, the Forward continues to provide him a platform, allowing its putatively Jewish brand to extend credibility to him. Most recently, Shehada, a contributing columnist at the magazine, twisted the Passover story to compare the people of Gaza to the enslaved Hebrews and, by extension, Israel to the Egyptian enslavers. (“The man-made plagues of Gaza,” March 31, 2020.)

The story of Passover and the ten plagues always filled me with awe: Egyptians punished with hunger and thirst, bloody water, blinding darkness and loved ones lost overnight. When I was a young person, those horrifying plagues were unimaginable. Then, I experienced similar, man-made plagues, plagues that continue to swallow Gaza — slowly, painfully.

I remember summer of 2006, when the entire enclave was plunged into blinding darkness after a massive explosion sent shockwaves through the city. We rushed to the radios to find out what had happened, and learned that Israel had bombed Gaza’s only power plant to the ground.

The same plant was bombed again in 2014, and darkness, a “darkness that can be felt,” (Exodus 10:21) has engulfed Gaza ever since; at best, we’ve had eight hours of electricity per day, while on many days, we’re lucky to see a flicker of light.

Not long after the first bombing, in 2007, Israel put the entire region on lockdown. An aerial, naval and ground siege, and then Operation Cast Lead the following year pounded the enclave’s infrastructure, leaving large parts of Gaza so broken that its people were forced to live like it was the stone age.

God sent the plagues to force the Egyptians to set the Hebrews free; in our case, we’re held in confinement by those same people.

To Shehada, it doesn’t matter that the electrical plant was bombed in response to the kidnapping of one Israeli soldier and the killing of two others. Seven armed terrorists dug a cross-border tunnel to carry out what the Israeli government deemed “an unprovoked attack,” only one year after Israel withdrew every last soldier and civilian from Gaza. The Hamas takeover of the strip in 2007, and all of the circumstances of the 2014 war, are similarly irrelevant to him. To Shehada, Jews defending themselves are comparable to slave-owners.

In 2016, the Forward published a very different opinion piece by a former member of the British National Union of Students, who explained why Holocaust inversion is so harmful. Comparing “the plight of Palestinians to the plight of Jews at the hands of the Nazis,” he wrote, “was to use the memory of the Holocaust as a stick to beat its victims and their descendants.” Shehada’s appropriation of the Passover story and grotesque comparison of Israelis defending themselves against terrorism to the ancient Egyptians who kept Jews as slaves does the same.

Of course, there are numerous factual problems with the piece as well. 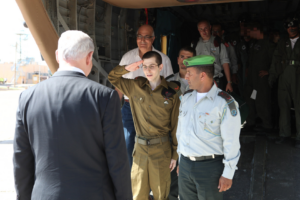 The electrical plant was not, as Shehada claims, “bombed to the ground,” in 2006, nor was the “entire enclave . . . plunged into blinding darkness.” According to the New York Times, the plant supplied 43 percent of the strip’s electricity, and was repaired in seven months. An Israeli spokesperson “said that Israel had targeted the plant’s transformers while avoiding its turbines in order to allow quicker repairs,” and that the reason it was done was so that the darkness would “make it more difficult for militants holding [Corporal Gilad] Shalit to move around,” and thus, hopefully, aid in his recovery.

As he’s done in the past, moreover, Shehada cites sources that don’t support his claims. Following the link to Shehada’s source about the events of 2007 leads to an article dated 2017, about events from 2017, and following through further to the original source for the news, one would find that the eleven-day 2017 closure came “after [the] Har Adar terror attack, amid general concern over volatility in Palestinian areas.” (Of course, Shehada is more likely referring to the 2007 implementation of the blockade of Gaza – a fully legal blockade that was implemented in response to the takeover of Gaza by a genocidal terror organization sworn to Israel’s destruction.)

Later in the article, Shehada writes, “water treatment facilities couldn’t function without power, so raw sewage began to run through the streets and between houses.” The source he cites, written by now-Forward Editor-in-Chief, then-Times Jerusalem Bureau Chief Jodi Rudoren, says, “raw sewage has flooded streets in a southern Gaza City neighborhood in recent days, threatening a health disaster, after a shortage of electricity and cheap diesel fuel from Egypt led the Hamas government to shut down Gaza’s lone power plant, causing a pump station to flood. … Hamas has refused to import Israeli diesel because of taxes imposed by the Palestinian Authority.” (Emphasis added.)

This sloppiness illustrates that even after his numerous false statements, the Forward is still not fact-checking Shehada’s claims – even to the point where he is able to misrepresent Rudoren’s own writing.

Shehada concludes, “Gaza’s plagues — the blinding darkness, the stinking water, the diseases and hunger — were are [sic] all preventable. They were all man-made.” That much is true. They were made by Hamas. But as with his earlier writing, Shehada completely ignores the role that Hamas has played in creating the dismal situation in Gaza. There’s no mention of the millions of dollars in international aid the Hamas leaders have either stolen to enrich themselves or squandered building more terror tunnels as well as missiles and rockets. He never asks why Hamas did not spend some of that aid money to rebuild the power plant. Indeed, this piece does not mention Hamas at all.

And on March 24, Shehada used the global pandemic to call for an end to the blockade. (“In the age of coronavirus, Israel’s blockade of Gaza is a death sentence.”) The absurdity of the request was vividly illustrated only three days later, when Hamas launched yet another rocket into Israel, and again on April 2 when Hamas leader Yahya Sinwar threatened to “stop the breathing of 6 million Israelis.” As noted above, a UN report found that “the naval blockade was imposed as a legitimate security measure in order to prevent weapons from entering Gaza by sea and its implementation complied with the requirements of international law.” Nothing about the current situation indicates that Hamas would give up its genocidal aims if only the blockade were lifted.

Indeed, as Israeli-Arab journalist Khaled Abu Toameh wrote, one of the reasons for the recent rocket attack was “to remind Palestinians, Israelis and the rest of the world that the outbreak of the coronavirus pandemic has zero impact on the ideology and plans of extremist Muslim groups.” Just as the Forward and its propagandist contributor find themselves unable to stand down during this crisis, Hamas, with its obsessive focus on destroying the Jewish state, even to the great detriment of its citizens, surely would use a cessation of the blockade as an opportunity to import weapons. Under these circumstances, calls on Israel to lift its legal and justified blockade are not simply wrong-headed, they are immoral.

Shehada complains of the inadequate infrastructure that threatens to exacerbate any health care crisis. The people of Gaza do indeed find themselves in dire straits. But, as noted above, the problems in Gaza are caused, not by the fully legal blockade, but by the fact that Hamas directs its resources to terror infrastructure, rather than to maintaining a functional health care system.

Shehada’s attribution of the shortage of protective clothing and masks to the blockade flies in the face of the shortages of these items everywhere, including New York, which obviously is not under any blockade, and exemplifies the tendency of anti-Israel propagandists to attribute every bad thing that happens in the West Bank and Gaza to Israel. And as he’s done in the past, he disingenuously calls Israel’s restrictions on “dual-use” items – items that have both civilian and military uses – a “pretext,” even in the wake of weekly riots on the Gaza-Israel border and arson-balloons floated over it.

Moreover, following his pattern of making claims unsupported by his own sources, he says that Israel “bans” both hydrogen peroxide and chlorine, even though the document he cites, from the group Gisha, says that “items it [i.e., Israel] considers to be “dual-use” . . . require special permission to enter.”

Shehada then goes on to blame the US for cutting aid to “UNRWA-run hospitals.” But again, he is not forthcoming about the reasons. The US cut aid, not specifically to hospitals, but to the organization as a whole. According to a UN report, UNRWA schools were used both to store and to fire rockets at Israel in 2014. Textbooks used by the organization in its schools deny Jewish history and holy places in the region, present Israel as an illegitimate state, and promote violence. And, while the UN High Commission on Refugees (UNHCR, the UN organization that takes responsibility for all refugees other than Palestinian refugees) “work[s] to ensure that everybody has the right to seek asylum and find safe refuge in another country,” and “has helped millions of people to restart their lives,” UNRWA instead fosters dependency from generation to generation among the Palestinian population that it purports to serve.

As I’ve written before, while people in Gaza lacked medical treatment, Hamas has used hospitals as its headquarters, and launched rockets from hospital parking lots. While hospitals go lacking in basic supplies, Hamas spends millions on terror tunnels. The Israeli Coordination of Government Activities in the Territories (COGAT)  estimated that from the end of Operation Protective Edge in 2014 to May 2017, Hamas spent 120 million US dollars building terror tunnels.  COGAT also notes that electricity, the focus of Shehada’s Passover piece, “is redirected to build and lighten the terror tunnels 24 hours a day, while hospitals and the homes of civilians suffer constant outages.”

In an April 2 email, the Forward noted that it is “deepening our investment to grow The Forward’s footprint nationally.” As it does so, it must refrain from promoting baseless claims and harmful propaganda and editors must take their journalistic responsibilities seriously.