At funerals for Palestinian terrorists, there is a strange disconnect: flags broadcast what media coverage buries.

On the one hand, flags cover the bodies of Palestinian fatalities, plainly confirming the deceased’s terror organization membership. On the other hand, despite the highly visible insignias, major Western news agencies cover up the Palestinian casualty’s terror affiliations. 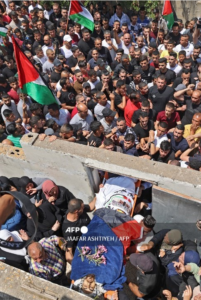 Mourners carry the flag-draped body of a Palestinian youth, killed during clahes [sic] with Israeli troops in the town of Yabad near Jenin a day earlier, during his funeral in the same town on June 2, 2022. The Israeli security forces have stepped up their operations in the West Bank in recent months, carrying out almost daily raids to arrest suspects after a spate of deadly attacks inside Israel. JAAFAR ASHTIYEH / AFP

Oddly, AFP’s caption cited the “flag-draped body,” but made no reference to which flag, although that information is highly relevant to the events. In this particular image, a folded Palestinian flag partially covers the casualty. More visibly, on the body’s lower half, lies the flag of the Al Aqsa Martyrs Brigade, a designated terrorist organization. The appearance of the Al Aqsa Martyrs Brigade’s symbol on the man’s body signifies that he was a member of the terrorist organization. 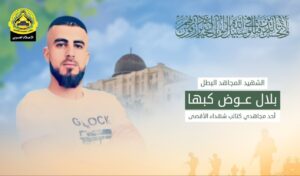 Indeed, the organization claimed Bilal Kabha, the casualty, as one of its own.

AFP did not deem this basic fact newsworthy. The omission of Kabha’s terror organization is particularly striking given the news agency’s inclusion of other biographical information, however inaccurate. Though Palestinian media have reported that Kabha was 24, AFP’s caption described him as “a Palestinian youth.”

.@AFPphoto, @AFPFactCheck, by your criteria, at what age is a Palestinian fatality no longer a “youth”? This man was 24, according to Palestinian gov’t controlled WAFA. https://t.co/OeTSL4LXNw (1/2) pic.twitter.com/KZIPtwjsT3

AFP’s articles that day (June 2) also neglected to note that Kabha was a member of the Al Aqsa Martyrs Brigade. (See “Third Palestinian in 24 hours killed by Israeli army: health ministry” and “Palestinian killed in West Bank clash with Israeli army: Palestinians“).
Kabha was not the only Palestinian casualty whose terrorist affiliation was buried that day. Thus, AFP’s June 2 news stories neglected to identify Ayman Muhaisen, a second Palestinian killed that day in clashes with the IDF, as a member of Popular Front for the Liberation of Palestine (PFLP), another terror organization.
In this case, the news agency’s funeral captions did commendably note that PFLP members are carrying Muhaisen’s body. 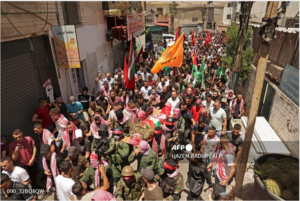 Members of the Popular Front for the Liberation of Palestine (PFLP) carry the body of Ayman Muhaisen, 29, killed in a clash with Israeli troops in the Dheisheh refugee camp near the West Bank town of Bethlehem, during his funeral in the same camp on June 2, 2022. Muhaisen was the third Palestinian killed in 24 hours after a woman approaching soldiers with a knife was shot early yesterday, and a man was killed in an Israeli raid in the northern West Bank later that day. HAZEM BADER / AFP

AFP’s photographs clearly show that Muhaisen’s body is draped in full PFLP regalia. AFP clearly knew about Muhaisen’s status as a member of a designated terror organization, so why didn’t its reporters note it in the stories?

There was nothing exceptional about AFP’s burial of the Palestinian casualties’ terror affiliations last week.

Indeed, Reuters June 2 article (“Israeli troops kill 2 Palestinians as violence simmers“) also did not report that the aforementioned Bilal Kabha, killed that day in Yabad when Israeli troops came to demolish the home of the terrorist who murdered five last month in Bnai Brak, is a member of the Al Aqsa Martyrs’ Brigade.

In addition, Reuters’ story ignored the army’s information that Kabha fired on Israeli troops, drawing fatal return fire. Reuters’ account cited stone-throwing on the part of the Palestinians, but not shooting or the use of Molotov cocktails and explosives. According to Reuters:

Clashes between Palestinians and Israeli soldiers broke out after dark when the military entered the village of Yabad to demolish the house of a Palestinian gunman who had shot dead five people in an Israeli city on March 30.

Medics and residents said villagers threw stones at the soldiers who opened fire at them.

The Palestinian Health Ministry said one man was killed and two others critically wounded. It was not immediately clear whether they had all taken part in the confrontation.

In contrast, Haaretz reported about the same incident in which Kabha was killed:

The Israeli military said forces carried out the demolition order against the house of Diaa Hamarsheh, during which “violent riots broke out and hundreds of rioters threw stones, set fire to tires and threw Molotov cocktails and explosives at Israeli forces.”
The army said it used riot dispersal measures and fired at Palestinians who they said opened fire at them.

Associated Press’s June 2 article, “Israeli troops kill 2 Palestinians, one an alleged attacker,” does not report that Bilal Kabha is a member of the Al Aqsa Martyrs’ Brigade. (A later version of the story reported about Kabha: “The Islamic militant group Hamas said he was one of its fighters.” Al Aqsa Martyrs Brigade is Fatah’s terror wing, not Hamas’).

Unlike the three news agencies which ignored CAMERA’s requests to amend their coverage to include information about the casualties’ respective terror credential, Times of Israel commendably added the following to its article (“Palestinian said killed in West Bank clashes as IDF moves to raze terrorist’s home“): “The Al-Aqsa Martyrs Brigades, a designated terror group, later claimed him as a member.”

Palestinian terror organizations literally wave their flags in the faces of Western journalists, perhaps confident that the media can be trusted to erase the flags from the frame.