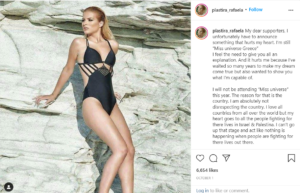 “No, she was never the representative from Greece. Any claims to the contrary are not correct,” Meg Omecene, communications director for MOU, definitively affirmed in response to CAMERA’s request that the organization responsible for running the international beauty pageant weigh in on Plastira’s disputed claims.

In recent days, the pro-boycott PACBI, which has a long history of fabricating BDS wins, and Palestinian news outlets championed the alleged BDS “victory,” and some international news platforms along with Israeli outlets also initially bought the story. 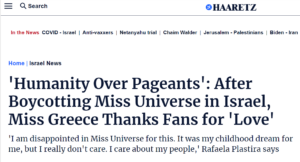 Typical among them was Haaretz, which initially reported (“‘Humanity Over Pageants’: After Boycotting Miss Universe in Israel, Miss Greece Thanks Fans for ‘Love'”):

The winner of the Miss Greece pageant, Rafaela Plastira, expressed on Wednesday her appreciation for the support in her decision to not attend the Miss Universe pageant in Israel.

She posted on her Instagram, “It’s so beautiful to see how much love and support and understanding I get from all of you…my guardian angels are there when needed.”
“I am disappointed in Miss Universe for this. It was my childhood dream for me, but I really don’t care. I care about my people. Humanity above beauty pageants,” she wrote.

This comes in response to Plastira’s original post in October, “I will not be attending Miss Universe this year, the reason for that is the country.

“I can’t go up that stage and act like nothing is happening when people are fighting for their lives out there. Palestine lives in my heart forever.”

As the accounts citing a BDS narrative started to surface, blogger David Lange of Israellycool was skeptical and reached out to Star GS Hellas, the Greek organization with the license to appoint Miss Greece. Star GS Hellas responded to Lange:

Rafaela plastira does not belong to our organization. Sofia Arapogianni is the official MISS UNIVERSE GREECE 2021. Rafaela Plastira never has been Miss Universe for Greece. She called herself by her own. We don’t know her, she belongs to another organization. The rights for Miss Universe Greece belong to GS HELLAS.

Regarding the issue of Rafael Plastira’s departure from Miss Universe 2021, in which the Palestinian issue was cited, it is all false.
Rafaela Plastira is Star Hellas 2019 and is her only title, she never had the official anointing to represent our country in MISS UNIVERSE 2021, as MISS UNIVERSE GREECE.

The official MISS UNIVERSE GREECE for 2021 is Sofia Arapogiannis, announced by Miss Universe 2021 and is the crowned of the GS HELLAS NATIONAL CULTURES entitled MISS GS HELLAS 2021.

I would like to inform all Greeks, that now, the national organization GS HELLAS, is the one who preserves the legal rights and contracts for Greece’s representative, but also its participation in Miss Universe 2021. Everything else is false, unsolicited and cunningly alleged misinformation. [Translation from Greek by Facebook.]

Under the new headline, Haaretz now commendably reports (“Greek Model Who Said She Would Boycott Miss Universe in Israel Was Never Meant to Participate“):

A Greek model who announced she would boycott Miss Universe pageant in Israel, in solidarity with the Palestinians, was never supposed to participate at all.

The body responsible for selecting the Greek representative for the international pageant said on Saturday that “Rafaela Plastira’s statement that she will not participate in the Miss Universe pageant… is false.”

According to a statement posted on Facebook by Giorgos Kouvaris, president of Star & Mr GS Hellas, Plastira “won the Star Hellas 2019 title, and this is the only title she has. She was never supposed to represent our country in the Miss Universe pageant.”

Additional news outlets such as The Jerusalem Post and Times of Israel followed with articles reporting GS Hellas’ denunciation of Plastira as a fraud who never held the title of Miss Greece. TPS News Agency today deleted its Nov. 25 story (“Boycotting Miss Universe pageant in Israel, Miss Greece Accused of Anti-Semitism”) which incorrectly reported that “Miss Greece” Plastira decided to boycott the pageant in Israel due to her anti-Israel sentiments. The news agency continues to look into the story.

In communication with CAMERA, TPS noted media reports dating back to June which identified Plastira as Miss Greece, raising the possibility that Plastira had been Miss Greece earlier this year until GS Hellas gained rights to name Miss Greece.

As a result of the confusion around this issue, CAMERA reach out to Miss Universe Organization (MOU) to finally resolve any lingering questions as to whether Plastira had ever been Miss Greece and whether she had ever been scheduled to attend the pageant in Eilat.

CAMERA wrote to Omecene, of MOU:

My question for Miss Universe Organization is whether MUO at any point recognized Ms. Plastira as Miss Greece, slated to compete in Israel in December? Had she ever been invited to the pageant in Eilat, Israel or was she ever registered with MUO to attend as Miss Greece?

It was in response to these questions that Omecene unequivocally replied: “No, she was never the representative from Greece. Any claims to the contrary are not correct.”

MOU’s definitive statement that Plastira is not and never was Miss Greece, and that she was never slated to travel to the pageant in Israel, leaves yet another BDS lie in tatters on the floor like discarded confetti at the close of a grand ball.

CAMERA has prompted J-Wire, an Australian Jewish news service which had published TPS's false article, to remove the piece.