Media stories involving water one way or another – dams, swimming pools, cuts during Ramadan – have long been the subject of false accusations against Israel. In 2015, CAMERA compelled Agence France Presse and Al Jazeera to correct following false reports that Israel deliberately flooded the Gaza Strip after opening dams in the south. (There are no dams that can be opened.) In 2008, CAMERA exposed Gideon Levy’s falsehood that in the West Bank that the only place where Palestinians can learn to swim is in a rundown water park in Jericho. (In fact, as his own paper had reported, every West Bank city has a pool.) Undeterred, the veteran Haaretz reporter invented in 2015, “there are no swimming pools in the Gaza Strip.” (There are.)

Today, Agence France Presse’s story today (“Swim team braves pollution to dive into Gaza waters“) is about Gaza youngsters with Olympic aspirations who simply have no choice but to swim in one the most polluted waters in the world. The article begins:

On one of the world’s most polluted coastlines, 30 young Palestinians dive head first into the sea off the Gaza Strip, their minds filled with dreams of Olympic glory.

Aged between 11 and 16, they make up a rare swimming club in the Palestinian enclave, and perhaps its only mixed-sex one.

Coach Amjad Tantish talks through a warm-up before they race from the trash-strewn beach into the sea as he continues to bark instructions.

Conditions are far from perfect; the waves make serious training difficult and they have little equipment.

But Tantish explained that there are no free public swimming pools in the Gaza Strip, so they had to brave the sea.

“We lack even the simplest equipment such as goggles and swimsuits,” he said. “We don’t have any funding.”

The Mediterranean hugs the entire 40-kilometer western border of the Gaza Strip, but almost no one enters its waters.

Unmentioned is the fact that Amjad Tantish is, according to his own description on the Indiegogo site, “a known foreign media fixer in Gaza that work for biggest world media outlets in Gaza.” Does Tantish also work for AFP, or has he done so in the past? The wire agency, which has previously run into trouble for employing a journalist who himself was part of the story, doesn’t say. Which other media outlets (namely The Independent and China’s Xinhua ) which covered Tantish’s swimmers might work with him, or have worked with him in the past, without saying so?

Beyond the questions about transparency and conflict of interest, another obvious flaw with the story is that it fails to mention that Tantish clearly trains many young aspiring swimmers in Gaza who do have access to swimming pools and who train in pools. A video produced by The Independent recounts that after the 2014 war, Tantish used debris from buildings destroyed in the fighting to build a barrier and create a pool by the sea. “Four years on,” says the Independent narrator, “Amjad [Tantish] has selected the best candidates from his sea swim program and now uses local pools for his training sessions.”

Indeed, there is no shortage of photographs of young swimmers with their sights on the Olympics training in Gaza’s pools. Days ago, AFP itself distributed photographs from Anadolu news agency showing young athletes training in pools. 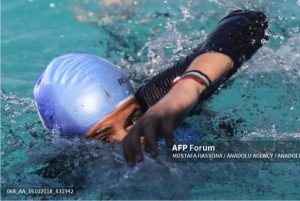 Even on Tantish’s own Facebook page it is possible to find photographs of young swimmers training in a Beit Lahia pool right next to the sea. 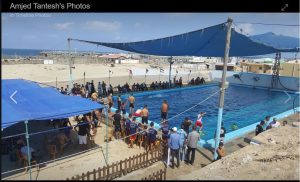 Tantish emphasizes his swim program’s meager resources, alleging: “We lack even the simplest equipment such as goggles and swimsuits.” He added: “We don’t have any funding.” In fact, since 2016, Tantish’s swimming programs have received support from a German NGO called Stiftung Sternenstaub. Alarab UK reported last week that Tantish

pointed out that assembling a swim team for girls aged 10 to 14 became a reality for the first time, and that he got support from a German foundation that covered the costs of the swimming pool, the transportation and some of the equipment, with the goal of training swimmers, especially girls, to the Tokyo Olympics. (translation by CAMERA Arabic)

A Stiftung Sternenstaub Facebook post indicates that the NGO has been involved as recently as two weeks ago. 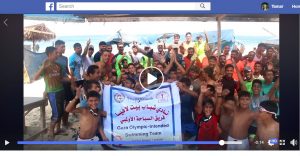 A screenshot from an October 2018 video on Stiftung Sternenstaub’s Facebook page about a one-kilometer swim, with sponsorship from the German NGO

Also not credible is AFP’s claim that, aside from this hardy group of determined and desperate swimmers with no other options, “almost no one enters” the waters off Gaza’s beaches. The article states: “The Mediterranean hugs the entire 40 kilometre (25 miles) western border of the Gaza Strip, but almost no one enters its waters. Later, it adds: “For those still willing to get wet, environmental experts say the water near Beit Lahia in northern Gaza has the lowest rate of pollution.” In fact, enjoying the beach is a popular past-time along the Gaza coast, as AFP pictures demonstrate. 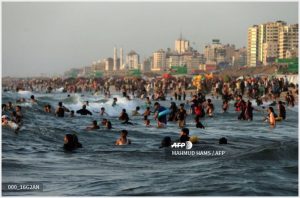 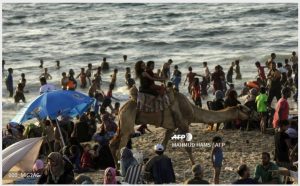 Thus, young Gaza swimmers with promise join Tantish at his practices in swimming pools. Other eager swimmers can join his classes which apparently meet at least part of the time on the beach. In short, the articles basic premises – first, that young swimmers in Gaza have nowhere to practice besides the polluted coast and second that the athletes are so desperate that they swim in waters that hardly anyone else would dare enter – just don’t hold water.

This post was updated on Oct. 23 to add information about the German NGO which contributes to Tantish’s swimming program.