CAMERA has recently highlighted numerous examples of the New York Times using language to manipulate reader understanding of the Arab-Israeli conflict and its players. 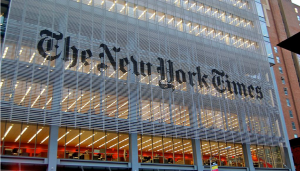 Over the past several weeks, for example, the newspaper slurred an official who fights anti-Semitism as “a longtime opponent of Palestinian rights causes,” but dubbed a student who led a virulently anti-Israel organization on campus as merely an “advocate for Palestinian rights” whose credentials as an anti-Israel activist are “far from clear-cut.” It wrongly declared that Palestinian stone-throwing attacks, part of a regular schedule of rioting along Gaza’s border with Israel, were a “response” to supposed Israeli “intervention,” but concealed that a wave of Israeli airstrikes were a response to Palestinian rocket fire. Earlier in the year, a Times count of “protesters” killed by Israel included Hamas gunmen who were killed while attacking Israeli soldiers.

The pattern continued yesterday in a Times story about the relationship between Israel and the Kingdom of Jordan. The article, by Isabel Kershner and Rana Sweis, recounts a diplomatic crisis between the two countries as follows:

The language is vague. There was a confrontation, then two dead Jordanians. The clear impression is that the Israeli killed the two Jordanians, which is narrowly true, but readers aren’t told whether “confrontation” describes the slaying of the Jordanians without cause, some pushing and shoving, or just a shouting match. We sense there’s an Israeli aggressor, and that’s all.

The newspaper could have shared the key facts about the ‘confrontation’; it chose not to.

In fact, the Israeli guard had been a bystander to an argument between two Jordanians before one of them turned on the Israeli and stabbed him with a screwdriver. The guard responded by firing his weapon, hitting the attacker and another bystander. What looked in the Times like an example of Israeli aggression in fact was yet another attack against an innocent Israeli.

Even readers who bother to click on the hyperlink in the offending passage and read the older article it links to aren’t given the full story. That article refers to the stabbing of the guard as an Israeli claim. In none of the Times articles are readers informed that an investigation by Jordanian authorities ultimately confirmed Israel’s account.

The newspaper could have easily shared the key facts about the “confrontation” without adding to the length of the article; it chose not to. And so the pattern continues. Opponents of anti-Semitism are supposedly opponents of Palestinian rights, while opponents of Israel’s existence are defenders of Palestinian rights but not anti-Israel. Palestinian stones  throwers are responding to intervention, while Israeli airstrikes aren’t a response to the Palestinian rockets that, unbeknownst to Times readers, preceded the airstrikes. And now, the Israeli victim of a Jordanian stabbing attack is actually the aggressor.

Here is the @nytimes today erasing violence against Israelis and recasting Israel as an aggressor.

As Jordan’s own Public Security Directorate has admitted, the “confrontation” was actually a stabbing attack by a Jordanian against the Israeli, who fired back in self defense. pic.twitter.com/jJzEU1sgzR