The following article appeared in The Algemeiner on May 20, 2021.

The South Florida Muslim Federation and its Executive Director, Nezar Hamze, have some decisions to make.

Are they going to do the hard work of promoting peace and human rights in the Middle East? Or are the organization and its leaders going to foment hostility towards Israel and American Jews?

Is the organization going to increase peace between various ethnic and religious groups in the US? Or is it going to undermine the already tenuous bonds of comity in America through acts of public incitement and demonization?

If you go to the organization’s website, you’ll find that it is linking to and promoting videos of various anti-Israel protest rallies that took place in downtown Miami this past weekend.

And not only did the South Florida Muslim Federation promote the videos of the rallies, they also promoted the rallies themselves.

One video, taken by someone who goes by the name Daniyal Hasan and posted on Facebook, shows protesters gathered at Bayfront Park on Saturday, May 15, 2021.

In the video, protesters can be heard chanting, “Netanyahu, You Can’t Hide, We Charge You With Genocide,” “From the River to the Sea, Palestine Will Be Free!” and “Israel, What Do You Say? How Many Kids Have You Killed Today.” 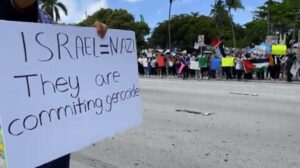 Antisemitic sign at May 15, 2021 rally promoted and broadcast by South Florida Muslim Federation. The organization’s executive director is Nezar Hamze, a sheriff’s deputy in Broward County, Florida. (Screenshot from video.)

At about eight and a half minutes into the video, which can be seen on Facebook here, a keffiyeh-wearing protester is shown displaying a sign that reads “ISRAEL = NAZI/They Are Committing Genocide.”

These are not messages offered by people intent on promoting Palestinian rights; instead, they are lies geared towards inciting hostility against Israel, and also its supporters in the US.

These are messages offered not by people intent on achieving self-determination for Palestinians living in the Gaza Strip and the West Bank, but on destroying the Jewish state (“From the River to the Sea”), or totally inverting history to compare Israel to the Nazis.

The president of the South Florida Muslim Federation’s executive committee, Samir Kakli, recently authored a letter to the editor that was published in the Miami Herald and reprinted in the Palm Beach Post, which described the text as “a joint statement by the Imams across South Florida.”

In the letter, Kakli and his fellow leaders complain that Palestinian dignity has been attacked during the recent round of conflict in the Holy Land.

Kakli writes that he hopes and prays “that all Americans — Jews, Christians, Muslims and others — come together to work for a just solution to this conflict and bring dignity to every man, woman, and child in Jerusalem, and the entire region, regardless of faith.”

It’s a laughable proclamation coming from a man who leads an organization that uses its webpage and organizational power to promote such ugly incitement against the Jewish state in the streets of Miami, where protesters falsely accuse Israel of genocide, call for the destruction of the Jewish state, and equate it with the Nazi regime.

In the letter, Kakli complains about the deaths of Palestinian children in the Gaza Strip, failing to mention that many of these deaths are caused by Hamas rockets that have fallen short and landed on the homes of Palestinians — or because Hamas uses civilians (and children) as human shields.

In his plea for peace in Jerusalem, Kakli makes no reference to the “TikTok Attacks” that took place in April, during which young Arab men recorded themselves attacking Orthodox Jews walking the streets of the Holy City and posted these videos on the Internet.

Kakli makes no reference to the ongoing incitement from the Al-Aqsa Mosque, where imams call for acts of violence against Jews, nor does he acknowledge the call from a leader of Hamas for his followers to buy a five-shekel knife and decapitate Jews with said knife.

In the story told by Kakli and promoted by the organization he leads, everything is Israel’s fault.

Promoting this type of narrative in Florida is no innocent thing. According to the Miami Herald, which printed Kakli’s letter, the ADL reported a 40 percent increase in antisemitic incidents in the state in 2020.

The South Florida Muslim Federation is no fly-by-night activist organization.

Hamze, its executive director, also works as a deputy sheriff for the Broward County Sheriff’s Department. One might ask Hamze, a law enforcement officer, what he thinks of such incitement in the face of violent attacks against Jews, like the one that recently took place at a kosher restaurant in Los Angeles.

A question for Deputy Hamze: Does the incitement his organization promotes against Israel make Jews in Florida more or less safe?