Yishai Goldflam, editor-in-chief of Presspectiva, CAMERA’s Hebrew Web site, published an Op-Ed column in Ha’aretz, faulting that paper and other Israeli media for spreading the falsehood that Israel maintains “Jewish-only” roads in the West Bank. This is significant, especially since the fiction of “Jewish-only” roads features prominently in “Israel apartheid” mythology and is frequently cited by anti-Israel and pro-BDS (boycott, divest, sanction) agitators.
Below is Yishai’s original Hebrew article, or you can click here for a link to the Ha’aretz page.  An English translation by CAMERA follows. 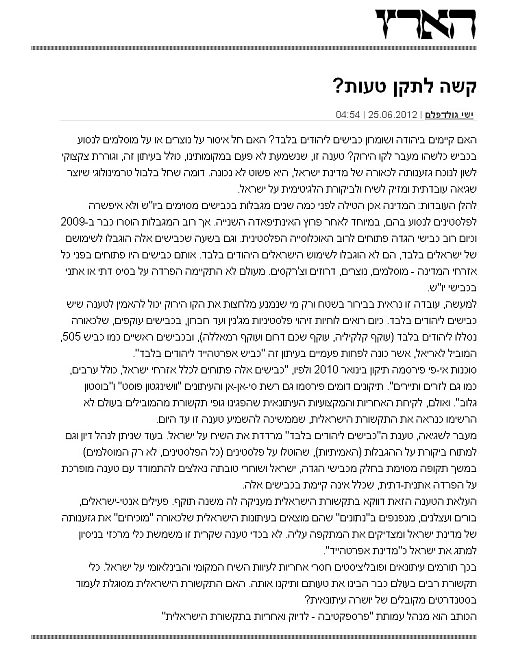 Is it so hard to correct an error?

Do there exist roads in Judea and Samaria that are designated for “Jews only”? Are Christians and Muslims really prohibited from traveling on roads across the Green Line? This charge, which is often voiced in these parts, including in this newspaper, provokes condemnation of Israel’s alleged racism– and is simply untrue. There appears to be a terminology confusion that produces a factual error that harms legitimate discussion and criticism of Israeli actions.
Here are the facts: the state did, indeed, impose restrictions on certain roads in Judea and Samaria several years ago and did not allow Palestinians to travel on them, especially after the eruption of the second intifada. But most of the restrictions were already removed in 2009. Today, most West Bank roads are open to the majority of the Palestinian population. And even at the time those roads were restricted for Israeli use, they were never restricted to Israeli Jews alone. The roads were open to all Israeli citizens — Muslims, Christians, Druze and Circassians. There was never a religious or ethnic-based separation on the roads of Judea and Samaria.
Actually this fact is crystal clear to anyone who has ever been to the area. Only someone who has never traveled in territory over the Green Line could possibly believe the claim that there exist roads for only Jews. Today, one can see license plates of Palestinians from Jenin to Hebron, on bypass roads that were allegedly built for Jews only, for example, the Qalqilya bypass, the southern Nablus bypass, and the Ramallah bypass roads, as well as on main roads like Route 505 leading to Ariel — a road that was labeled at least twice in this paper “an apartheid road for Jews only.”
The Associated Press published a correction in January 2010 stating, “These roads are open to all Israeli citizens, including Arabs, foreigners and tourists.” Similar corrections were published on CNN, The Washington Post, and The Boston Globe. But the journalistic responsibility and professionalism demonstrated by the world’s leading media outlets apparently made no impression on the Israeli media, which even today continues to air this false charge.
Beyond the error itself, the claim of “Jews-only” roads impairs reasonable discussion about Israeli actions. While it is possible to debate and criticize the (real) restrictions imposed on Palestinians (all Palestinians, not just Muslims) on some West Bank roads during a specific time period, Israel and her supporters are forced to address the bogus claim of ethnic-religious separation on these roads.
Raising this claim, particularly in the Israeli media, grants it validity. Anti-Israel activists, too ignorant and lazy to substantiate their own charges, wave around “facts” they find in Israeli newspapers that supposedly “prove” the racism of the State of Israel and justify their own attacks on her. It’s hardly surprising this mendacious claim has become a major weapon in the attempt to brand Israel an “apartheid state.” Thus, irresponsible journalists and publicists contribute to the distortion of the domestic and international discussion about Israel.
Many media outlets in the world have already acknowledged their mistake and corrected it. Is the Israeli media capable of meeting the accepted standards of journalistic integrity?
The author is director of Presspectiva– ensuring accuracy and responsibility in Israeli media.
*   *   *   *

The fact remains that, while Israel has no Jewish-only or settler-only roads, there are roads in the Middle East that are restricted to members of certain privileged religious groups. There are Muslim-only roads in Saudi Arabia, and only Muslims are allowed to even set foot in Mecca and Medina. For more information on this, see “Deconstructing ‘Israeli Apartheid’“.
Donate Now