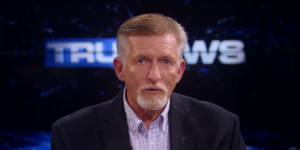 Rick Wiles is a well known antisemite. He runs TruNews, a website that demonizes Jews and Israel in a manner that puts it in league with Father Coughlin, Henry Ford, and worse.

A few years ago, he declared Israeli Jewish rabbis are “just like Judas … looking for a political savior who will rule a political kingdom on earth, a super race that will dominate the planet. That’s really what Zionism is all about.”

He has also claimed that President Donald Trump secretly converted to Judaism in 2017 and that the impeachment hearings against Trump were part of a “Jew-coup.” He’s also declared, “Anti-Christ will be a homosexual Jew.”

On Monday, Aug. 30, 2021, Wiles was at it again, declaring that Israel was responsible for the death of Christians at the hands of ISIS in Afghanistan and were trying to start a world war.

He spun his crazy conspiracy theories on an episode sponsored by Heavens Harvest, a company that sells emergency survival food over the internet. During the episode, Wiles and his sidekick Doc Burkhart played a clip from Blaze TV during which Glenn Beck condemned the U.S. State Department for failing to evacuate Christians from Afghanistan during the recent pullout from that country.

Riffing off Beck’s commentary, Wiles turned to the camera and asked, “What’s going on here? The U.S. government is trying to get Afghan Christians Killed? It’s the most diabolical anti-Christ thing I’ve seen happening in a long time.”

“I will remind you who was in the White House the day the bomb went off in the Kabul Airport,” he said. “It was the Prime Minister of Israel [Naftali Bennet]. He was in the White House and you will just have to just think and put things together. The U.S. government is blocking Christians from escaping Afghanistan. We’re being told Muslims killed the Christians. No, the U.S. State Department killed the Christians. […] The Muslim countries are the ones receiving them in!”

Wiles then called on Christians and Muslims to make common cause against their true enemy.

“At some point here, Muslims and Christians have got to come together and deal with a common enemy that is trying to pit both of us against each other in a world war and at some point we are going to have to realize who and what this enemy is,” he said.

After declaring that the U.S. State Department intentionally put Christians in harm’s way (into a “kill zone”) in Kabul, Wiles said the agency is “orchestrating the death of Christians” and blocking their escape from Afghanistan without being held accountable.

“There’s no news media coverage in the United States about this,” he said.

Then things got even weirder when Wiles suggested that the jihadists who are killing Christians are, you guessed it, Jews in disguise.

“I’ve said it for a long time,” Wiles said. “I don’t believe there is an ISIS, there’s only the Israeli terror state. The Zionists were dressing up as Muslim Arabs in the 1940s blowing things up. This is not a new trick. […] Thirty-four years later, they write books about it and brag about it.”

The catastrophe unfolding in Afghanistan was not an accident, Wiles declared, but part of a larger plan orchestrated by the anti-Christ (whom he has said previously would return as a homosexual Jew).

“This is an old trick of the Zionists, and Christians, we need to stop falling for this stuff. We were all shocked with last week with the bomb and it didn’t make sense,” he said adding that the fiasco prompts people to ask what Biden is doing.

“It looks like gross incompetence,” Wiles said. “It’s not incompetence. They’re carrying out a plan and that includes the killing of Christians. Who wants to kill Christians? The anti-Christ. It’s as simple as that.”

Heavens Harvest’s website confirms the relationship between the company and TruNews. (Screenshot)

After spewing this invective, Wiles announced a break and cuts to a commercial for Heaven’s Harvest survival food.

Make no mistake. Rhetoric like this has mobilized violence against Jews for more than 2,000 years, culminating in a mass killing of Jews in Europe during the Holocaust.

As documented by CAMERA researcher Ricki Hollander earlier this year, notions of Jews trying to control the world are redolent of Nazi propaganda promoted during the 1930s and 40s.

“The trope of Jewish supremacy and conquest was a mainstay of Nazi indoctrination,” Hollander wrote. “The old anti-Semitic canard about Jews seeking to dominate and control the world’s non-Jews was popularized in the fraudulent Protocols of the Elders of Zion and was resurrected by the Nazis who promoted it as incontrovertible truth. It was presented as the primary evil to be defeated.”

The notion of Jews as criminals and murderers was a “theme revisited frequently in articles and speeches by Nazi propagandists,” Hollander added.

CAMERA contacted TruNews sponsor Heaven’s Harvest and informed the company about Wiles’s rants and his status as a notorious antisemite.

An official from the company initially responded, “We know him personally and that is not the case. He’s not somebody that would go against somebody who was Jewish.” The official then asked for evidence of his antisemitism.

When informed of some of the hateful things Wiles has said over the years via email, the company responded, “Thank you for sharing this information. We will be reviewing it.”

Note: This article has been corrected to remove a reference to TruNews’s now defunct YouTube channel. (Aug. 31, 2021)