On August 2, the Forward published the first of what is now a series of two articles about “covert tactics targeting Israel’s critics,” by Josh Nathan-Kazis. (“A New Wave Of Hardline Anti-BDS Tactics Are Targeting Students, And No One Knows Who’s Behind It.”) This article mainly discusses the work of the Israel on Campus Coalition, both generally and with respect to a BDS resolution at George Washington University this past spring – even though the author tacitly admits that he can’t be sure that ICC was even connected to the anti-BDS effort at GWU.

Much of the information about ICC is poorly sourced from “a Jewish communal official who asked not to be named.” A bigger issue, however, is the overall tone of the article. It suffers from an apparently deliberate choice to portray this information in such a way as to make it sound like ICC is engaged in a shady conspiracy. For example,

After three years of development, shadowy pro-Israel actors are rolling out a suite of new tactics to oppose the boycott, divestment and sanctions movement that are more aggressive, more sophisticated, and more secretive than anything before. …

The people behind these new tactics are going to great lengths to hide their identities, though they seem to be working in concert with each other. They are conducting surveillance on BDS activists. They are creating anonymous pop-up websites that attack activists and student government representatives. They are hiring top-level political strategists and opposition researchers. And in Canary Mission, they are running a long-term campaign to blacklist student activists. (Emphasis added.)

All political movements monitor those working at cross-purposes, but the Forward claims that pro-Israel groups are “conducting surveillance.” Exposing people’s actual actions is termed “blacklisting,” even though Canary Mission does not advocate taking any particular action against the BDS activists — who in fact advocate to blacklist others. Calling such groups “shadowy” is simply a gratuitous slur. 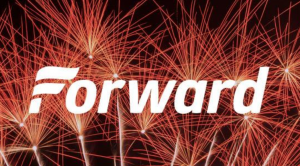 The right to anonymous political speech is protected by the U.S. Constitution. And, of course, Israel’s enemies on campus also act in secret, as Nathan-Kazis only briefly acknowledges: “the [GWU BDS] resolution passed by secret ballot on April 23.” Yet BDS’s tactics are of no importance to him.

The Forward continues, “someone is ramping up a secret, sophisticated campaign against college activists. What’s more, they appear to be doing it from somewhere deep inside the American Jewish pro-Israel apparatus.” (Emphasis added.)

The overall implication so far is one of a cabal, an impression that is furthered later when Nathan-Kazis tells us that “as the new anti-BDS forces began to get organized, Netanyahu sent a clear signal about how they should fight their battles. … [when he] traveled to Washington, D.C., to address the U.S. Congress.” (Emphasis added.) Never mind that the speech in question had nothing to do with BDS, college campuses or the Palestinians; Netanyahu, he implies, controls Jewish American college students.

The pattern continues with the claim that, “the ICC also paid $171,000 that year to Jeff Berkowitz, former research director for the Republican National Committee and one of Washington’s most proficient opposition researchers, a renowned expert in the dark art of digging dirt on political opponents.” (Emphasis added.)

After a shout-out to CAMERA as part of a “bafflingly long” list of organizations (proudly!) doing pro-Israel work on campuses, the Forward tells us, “the total amount of American Jewish and Israeli government funds flooding the anti-BDS effort is easily in the tens of millions of dollars each year.”

Unmentioned by the Forward is the assistance that pro-BDS campus groups get from American Muslims for Palestine. As CAMERA has noted before, “‘AMP provides speakers, training, printed materials, a so-called ‘Apartheid Wall,’ and grants to SJP activists.’ … AMP also has extensive ties to Hamas-linked ‘charities,’ including the now-defunct Holy Land Foundations (HLF).” HLF and five of its leaders were prosecuted by the U.S. Department of Justice and convicted of providing material support to terrorists. Similarly, Nathan-Kazis obscures the true nature of BDS and the threat that pro-Israel students are up against. He describes BDS groups merely as “Israel’s critics,” when the true goal of BDS is to destroy Israel.

Just as the claim that the IDF commits murder, terrorism, and atrocities is an attempt to limit the ability of Jews to defend ourselves physically, the claims that all groups that defend Israel or fight antisemitism are “right-wing” or somehow shady, engaging in immoral tactics, is an attempt to limit the Jews’ ability to defend ourselves rhetorically. That this attack was delivered in the Forward should come as no surprise to anyone familiar with that publication, and tells us more about the Forward’s depravity than about the organizations on which it is reporting. The false assertion that Jews are behind an international conspiracy to control the world is the focus of the notorious antisemitic “Protocols of the Elders of Zion” and many similar antisemitic smears. Sadly, here it rears its ugly head in the pages of a putatively Jewish publication.