A common trait of contemporary Palestinian and Arab nationalist propaganda is the attempt to conceal its intrinsic contempt for millions of Israelis, Zionists and Jews under relatable labels such as “artistic expression,” “grassroots activity,” “personal initiative” or even “educational endeavor.” The flimsy veneer repackages the same old hateful content, making it seem just harmless enough for “respectable” media outlets to mindlessly amplify.

Vogue Arabia is the latest Western media outlet to fall for this stunt. In an article entitled “Arab Stars Criticize Absence of Palestine on Google Maps,” the fashion magazine featured a series of Israel-free maps under the pretense of “artistic protest” objecting to the absence of “Palestine” from Google and Apple maps. For example, Turkish artist Adige Batur’s take was a map of Israel and the Palestinian territories (pictured below), labelled only “Palestine,” with flowers covering almost everything with the notable exception of the Dome of the Rock. 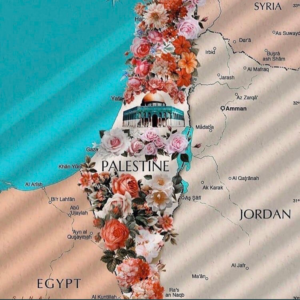 “Batur,”opined Vogue Arabia, “created this graphic with one thought in mind: Hope.” Indeed, it seems to be an honest expression of Batur’s hope that all Israeli Jews simply empty out of Israel. While Vogue Arabia’s article in English conceded that “critical voices highlight” that Israel’s noticeable absence from the image fails to “offer a balanced understanding of the Israeli-Palestinian conflict,” both its Arabic article and its Instagram entry could not be bothered to include that minimal qualification; instead, Vogue Arabia’s Instagram account referred to the image as Batur’s “creative rendering of Palestine” and included an even more extensive quote from the illustrator.

A map labelled “Palestine,” covering Israel, the West Bank and Gaza, is hateful and incites violence, no matter how many flowers bloom upon it. Such maps express a desire to eliminate the state of Israel, depriving its Jewish people of their right of self determination, meaning a sovereign, peaceful and prosperous life in their ancestral homeland. Even if Batur’s vision for the elimination of the state of Israel would allow for some Jews to remain in “Palestine,” his artistic erasure of everything Jewish indicates a desire to assimilate the Jews of Israel and their communities into a hostile Arab environment that historically has shown little tolerance towards Jews and other minorities.

Last year,  BBC Arabic’s radio promoted an “educational” project in the form of a child-friendly map that aims to teach young Palestinians that Israel and its Jews do not belong anywhere on “their land,” i.e. the entire territory between the river to the sea. Although BBC removed the item from its archives soon after CAMERA Arabic contacted editors, BBC’s initial promotion of the map demonstrated how fashionable invocations of “education” or “personal experience” can lead journalists to abandon their critical thinking skills.