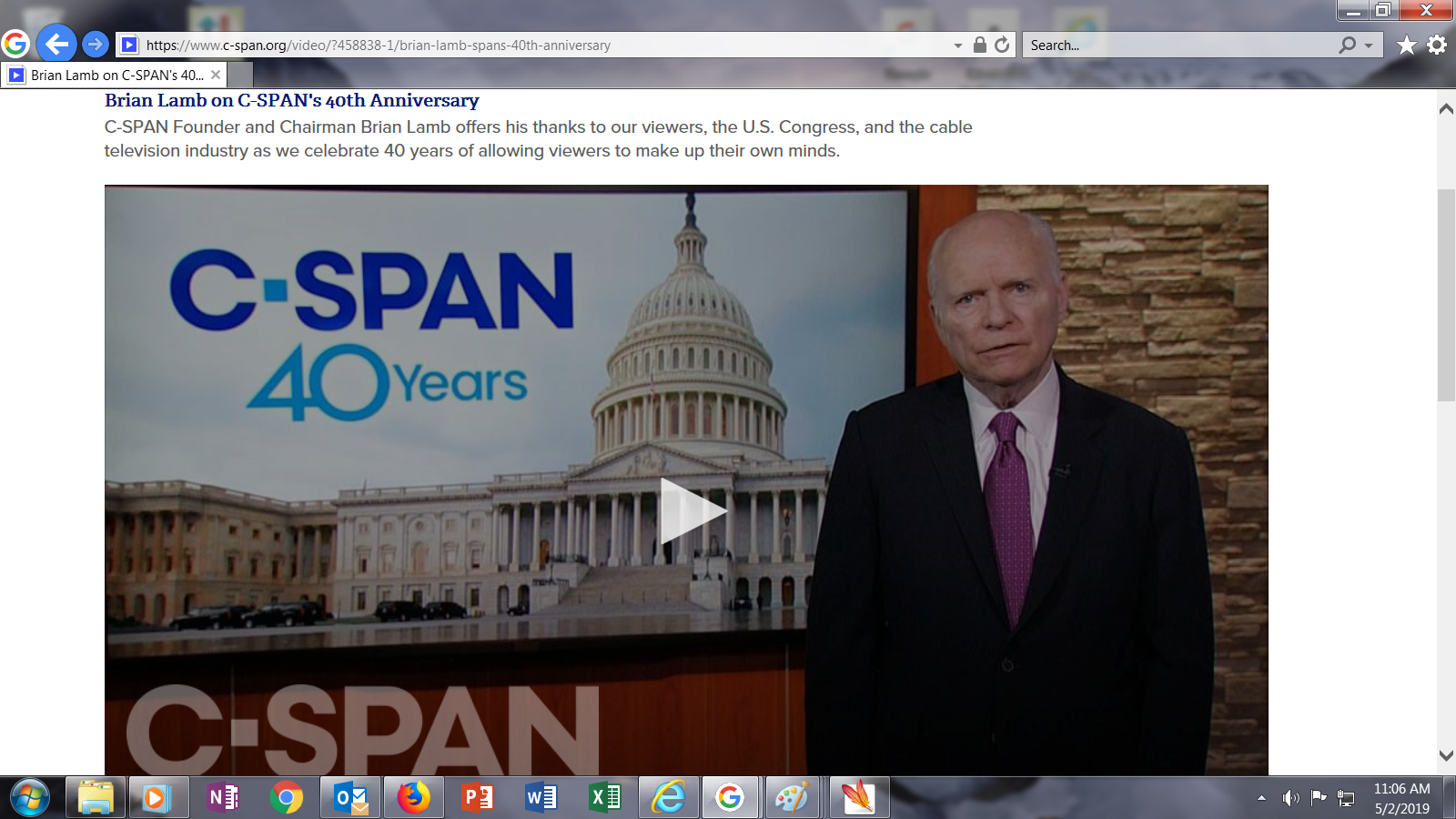 The network states that its mission is to “provide C-SPAN’s audience access to the live gavel-to-gavel proceedings of the U.S. House of Representatives and the U.S. Senate, and to other forums where public policy is discussed, debated and decide … all without editing, commentary or analysis and with a balanced presentation of points of view.”

The “balanced presentation” part as it pertains to Israel is routinely untrue.

But none of the foregoing touch on the dark side of C-SPAN’s broadcasting emanating from Lamb’s leadership that is easily found by Googling, for example, any of the following: C-SPAN and anti-Israel bias, C-SPAN and defamation, C-SPAN’s journalistic malpractice.

CAMERA’s unique decades-long coverage of C-SPAN reveals the dark side subjecting potentially millions of viewers routinely to “public event” anti-Israel indoctrination without the network even bothering to issue a standard broadcast disclaimer such as: “Points of view expressed in this program are not necessarily those of this network.” Likewise, the network’s daily three-hour morning call-in show Washington Journal  routinely indulges callers defaming Israel and the Jewish people.

• An April 2019 CAMERA report showed that the sponsor of a C-SPAN-aired public event is Washington Report on Middle East Affairs (WRMEA) magazine, a falsehood filled, virulently anti-Israel, anti-Jewish publication. For example, WRMEA in 1992 suggested that Israel’s Mossad killed John F. Kennedy, and later claimed that Israel was involved in the 9/11 attacks.

• A March 2019 report about Washington Journal callers indulged by C-SPAN while responding to outrageous statements by controversial Congresswoman Ilhan Omar, showed that on March 7, of the total of 15 callers who opined about Jews or Israel, 10 were hostile (67 percent) voicing mainly defamatory views. Likewise, on March 8, it was seven (78 percent) out of nine such callers. Hostile callers echoed Omar’s accusations about the alleged outsize power of the “Jewish lobby” basically meaning the American Israel Public Affairs Committee – AIPAC. Brought up was the matter of Omar’s dual loyalty false accusation against Jews. The dual loyalty accusation is an ironic theme for Omar since she herself is vulnerable to this charge (as is shown in the report).

• A January 2019 report about a C-SPAN-aired public event showed that a speaker’s claim that Israeli leader Ariel Sharon was “the architect of those mass killings [1982 massacre in Lebanon]” was a falsehood as shown in a court libel case.

• A December 2018 report showed that C-SPAN passed off as a legitimate news event, a 90-minute propaganda session provided by terrorist supporter, CAIR.

• A July 2018 report included another Washington Journal outrageous interchange. Caller: “They’re going to bring the American embassy to occupied Palestine and Jerusalem… they want Donald Trump out of office by the end of this term. So Vice President Pence can come in and take over. This is the part that will lead to World War III.” Host: “Who’s they?” Caller: “They are the Zionist English Jews and the Russian Zionist Jews – I mean the Russian Christian Jews.”

• A June 2018 report showed that C-SPAN presented as a legitimate news event, a propaganda broadcast by the Iranian government Press TV that included a Palestinian professor’s claim that “to be elected as a [U.S.] Congress person, you have to have a bridge to Israel and to commit to Israel and to the movement of the embassy from Tel Aviv to Jerusalem.” This brings to mind the classic “Protocols of the Elders of Ziyon” canard accusing Jews of global domination and control of world governments.

• A March 2018 report covered a conference that provided only anti-Israel speakers who slammed Israel and its supporters particularly the American Israel Public Affairs Committee (AIPAC) and Christian Zionists. Included was a swipe at CAMERA.

• A December 2017 report covered a public event that opened with an Islamic benediction, “Bissmillallah Rahmanir Raheemin” (translated from the Arabic as “In the name of god [Allah], the gracious, the most merciful”) followed up by a false characterization of U.S. policy, “The question to the Trump administration is – does it continue with that [Obama administration] policy because the rhetoric and the policy are saying exactly the opposite – that the United States is not just at war with violent extremist groups, but it is at war with Islam.”

• A December 2017 report covered a C-SPAN airing as a legitimate public event, a lengthy speech by Louis Farrakhan mainly castigating and defaming the United States and Israel.

• A December 2017 report showed that C-SPAN repeatedly passed off to its viewers a Palestinian propaganda film as factual documentation.

• An October 2017 report covered a public event which included an accusation likening “settler colonization” (by which the speaker means the presence of any Jews between the Sea and the River Jordan) to a cancer, charging that either the two-state solution or the one-state solution is like “using Tylenol to address the cancer… instead of chemo …the thing we need to do is remove the cancer… If we admit that the West Bank is occupied we have to admit that Tel Aviv and Haifa are occupied as well as Jerusalem.”

• A September 2015 report covering Washington Journal broadcasts described a situation in which five callers mentioned Jews or Israel. Four of the five made disparaging or defamatory messages, including, “Every beachwear store on the coastline [of Florida] is run by the Mossad [Jews],” “you said that Iran is our enemy. Well, I consider Israel our enemy …” “Congressman Sherman [Rep. Brad Sherman, (D-Cal.)], I am so proud of your unwavering support for Israel,” “I think you are a Jewish Congressperson, and I want to guarantee you are going to vote against it [Iran nuclear agreement]…” Host remained silent.

• An April 2015 report showed that C-SPAN aired a Noam Chomsky event in which the professor mendaciously mischaracterizes Israel as a “violent state that has carried out lots of aggression” – but not a word about Israel’s right to defend itself after being repeatedly attacked or drawn into wars by Arab armies or Islamist inspired terrorists such as in 1948, 1956, 1967, 1973, 1982 (Israel versus Lebanon-Palestine-Liberation Organization), 2006 (Israel versus Hezbolllah in Lebanon), 2014 (Gaza-Hamas).

• A September 2013 report included this Washington Journal interchange: “Thanks for the call” was host Scully’s complete reaction to frequent caller Kate’s three-minute uninterrupted diatribe about Syria’s civil war. It included this inflammatory falsehood equating U.S. and Israeli actions to Syria’s use of sarin gas to kill its own citizens: “What’s the difference in using napalm on children in Vietnam, white phosphorus on Palestinian children by Israel, or sarin gas and we don’t know who used this [in Syria]. Who are we to be lecturing about this?” The guest spoke more than five minutes without addressing this defamation. No one informed C-SPAN viewers that Israel used white phosphorus (which is not a chemical weapon or any other kind of weapon) in Gaza much like U.S. and coalition forces did in Afghanistan for smoke camouflage and marking. Host Scully failed to note that all the evidence pointed to the Syrian government in the August 21, 2013 deaths of more than 1,400 people (apparently most of whom were non-combatants) from poisoned gas, or that U.S. and coalition forces in Afghanistan have not used chemical weapons at all.

• A May 2012 report noted concerning C-SPAN’s repeated interviews of anti-Israel former government official Michael Scheuer: As historian and columnist Victor Davis Hanson has said, the more audiences heard from Scheuer the less they were impressed, “especially by Scheuer’s assertions in interviews that Osama bin Laden shouldn’t be identified as a terrorist, and that the Holocaust Museum in Washington was a means to make Americans feel guilty about the Holocaust. … Scheuer sounds goofier each time he gives an interview.” Scheuer was clearly off-base and bigoted, so why was C-SPAN still interviewing him?

When Lamb personally got involved in purveying anti-Israel, anti-Jewish propaganda 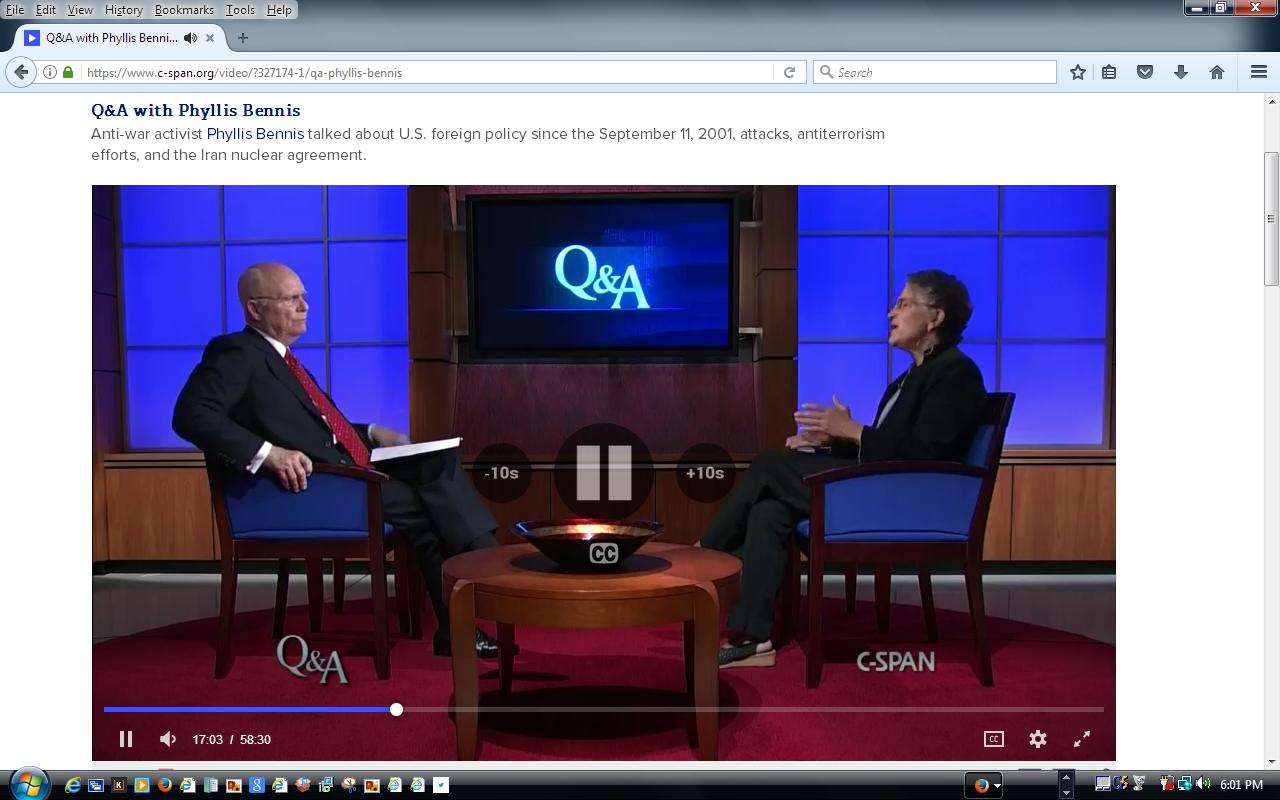 An August 2015 report covered the August broadcast of Brian Lamb’s July 2015 interview of veteran Israel-basher Phyllis Bennis (writer, analyst, fringe activist on Middle East issues) in a broadcast of the Q&A program. Bennis, prompted by Lamb, warmed up to her favorite activity, vilifying Israel. Lamb: “I’m going to run a piece of video of a person you know well. He died in 2003. He is a Palestinian by birth. You are a Reform Jew by birth and then became an anti-Zionist. We have to find out why. Here’s Edward Said [pronounced “Sa-heed”]: ‘… The official Israeli policy … has always been to not recognize the Palestinian people as equals … most Israelis and what seems to be the majority of American Jews have made every effort to deny, avoid or negate a Palestinian reality. That is why there is no peace.’” Bennis commenting on Lamb’s Said video clip, said, “He [Said] was a great mentor of mine in the last years of his life.” Bennis went on to echo Said’s false premise. The report debunks this premise.

The outrageous C-SPAN mode of operation developed under Lamb’s leadership, routinely defaming Israel (the only democratic/free enterprise country in the Middle East) and the Jewish people, has been ignored by Congress (which grants special access privileges to the network), the news media and C-SPAN’s patrons including the cable/satellite television providers such as Comcast. This mode is probably ingrained in the corporate culture making it unlikely, barring a huge public outcry, that there will be any change for the better.