A slightly different version of this op-ed appeared at The Algemeiner on October 22, 2021.

Sometimes, all it takes is a catchy phrase to perfectly capture the moral absurdity or obscenity of a moment — and help people understand the danger.

I propose a slight revision of these two sayings. I make this proposal after analyzing a six-part CNN series purportedly covering the history of Jerusalem, entitled “Jerusalem: City of Faith and Fury.”

The recurring theme of the series broadcast over the summer is that much of Jewish history is simply unimportant and uninteresting, and certainly secondary to that of the Arab population.

Entire swathes of the Jewish population of Jerusalem don’t even exist in CNN’s narrative. Even where the significance and relevance of Jews is undeniable, CNN finds a way to make it about anyone but the Jews. There are dozens of examples, many of which have already been critiqued by CAMERA  here, here, here, and here.

For the sake of brevity, here are an illustrative few.

The CNN episode on the era of King Herod spends approximately 15 minutes on Cleopatra and Mark Antony, but only 2 minutes on the Jewish rebellions. These rebellions saw the Second Temple and the city of Jerusalem destroyed, and the face of the Land of Israel changed forever.

In a series on Jerusalem, CNN felt the massacring, banishing, and scattering of the Jews from the city in a cataclysmic ending to their sovereignty in antiquity was more of a minor footnote to a foreign queen, whose relevance to Jerusalem amounts to an unsuccessful plot of little actual significance. Apparently the actual people living in Jerusalem – Jews – just weren’t interesting enough to CNN.

It doesn’t stop there.

In the episode covering the Crusader era, the series falsely evicts the Jews from their holy city, stating: “The Jewish people have been driven from Jerusalem, and now live in exile across Europe and Africa.”

Wrong. Not only were Jews present across the Middle East (in Asia), but they were present in the Land of Israel itself.

Jews famously aided the Muslim armies in capturing Hebron and Caesarea in the 7th century, and were massacred alongside the Muslim residents when Christian armies retook Jerusalem in 1099. How did CNN get this wrong?

Jews are again erased from the Middle East when CNN gets to the Israeli War of Independence and the Six-Day War.

While CNN manages to label even Israeli Arabs — who were never displaced — as “refugees,” not once are the 850,000 Jews expelled from Arab countries mentioned.

Meanwhile, even when Arabs are trying to murder the Jews of Jerusalem, the series finds a way to make it instead about an inflated depiction of Arab victimhood.

Narrator: “The [Jordanian] shelling is meant to target Jews in West Jerusalem, but it’s the Palestinian Arabs living in the area that are left defenseless.”

A few minutes later, once again:

Narrator: “Once Ammunition Hill is under Israeli control, the Israeli Army brings their fight deeper into Jerusalem. But it’s the Palestinian Arabs that are left vulnerable.”

Fadi Elsalameen, a featured commentator: “They see, contrary to what they were hearing on the radio at the time, you know, ‘we will defeat the Israeli presence,’ and all of a sudden it’s completely the entire opposite. People started getting frantic, and again another wave of refugees started marching towards Jordan.”

The Arabs were “left vulnerable,” it is suggested, because the Jews fought back.

The problem, it seems to CNN, is that these Jews weren’t dead.

But wait. It gets even worse.

Toward its conclusion, the series makes an inane attempt to create a parallel between the Black Lives Matter cause in the US, and the Israeli-Palestinian conflict.

While a commentator states “one human shouldn’t be privileged over the other,” in the background, images are shown of anti-Israel protesters holding signs reading “Palestinian Lives Matter.”

CNN’s concern over bigotry, however, seems to end when it comes to Jewish victims. The series itself provided a megaphone for antisemitic invective from one of its commentators, Huda Imam, who states during the final episode:

The whole of Palestine continues to be eaten up like a cancerous disease. Deleting, erasing, arresting, demolishing, and the world is silent again. 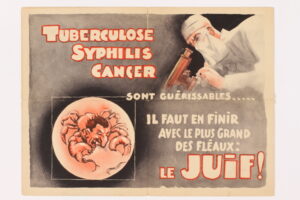 You don’t have to ask Ayatollah Khamenei to know what the implied solution is when the Jewish State is called a “cancer.” Associating Jews with diseases has a long, deadly history. The Nazis compared Jews to lice, typhus, syphilis, and cancer.

Medieval Europeans blamed Jews for the Black Death, and as a consequence, over 200 Jewish communities were massacred.

As the International Holocaust Remembrance Alliance notes, “[u]sing the symbols and images associated with classic antisemitism (e.g., claims of Jews killing Jesus or blood libel) to characterize Israel or Israelis” is a clear example of antisemitism.

Yet, not once did CNN challenge Imam’s statement, which is presented as legitimate commentary.

A responsible journalist would have at least let an Israeli Jew respond to this “cancer” rhetoric, but that’s not what the network did.

Astonishingly, it has been over a month since CAMERA raised these issues directly with CNN. As of this writing, we have not seen any corrective action. This is especially shocking given that by allowing Imam’s antisemitic invective without challenge, CNN is lending its credibility and brand to the statement in a way that contributes to the growing normalization of this type of antisemitism.

The public must, of course, loudly push back when mainstream networks uncritically broadcast obvious antisemitic statements. But we must also loudly push back at the gradual chipping away of Jewish identity and history. It’s time that CNN heard from concerned citizens who won’t stand for this any longer.