In a 2012 article in the Poynter Institute (“What the Forbes model of contributed content means for journalism“), Jeff Sonderman described the Forbes.com news website as “entrepreneurial journalism for an entrepreneur-focused publication” and “less website, more operating system — an underlying layer of technology that hundreds of contributors use to publish independently.” Sonderman explained:

Each contributor flies solo with his own blog. He is responsible for conceiving and creating the content, ensuring its accuracy and building an engaged, loyal readership. Forbes provides the technology and compensates some of the contributors, but otherwise, like all entrepreneurs, contributors are left to sink or swim on their own.

If Elizabeth MacBride’s work is any indication, accuracy and content quality are also left to sink in Forbes’ blog-based model. Her tendentious Aug. 29 article on Forbes’ website “Brave Entrepreneur: How the Fisherwoman of Gaza Built a Business in the Blockaded Seaport,” about Gaza fisherwoman Madeleine Kulab is long on propaganda and sparing with the facts. 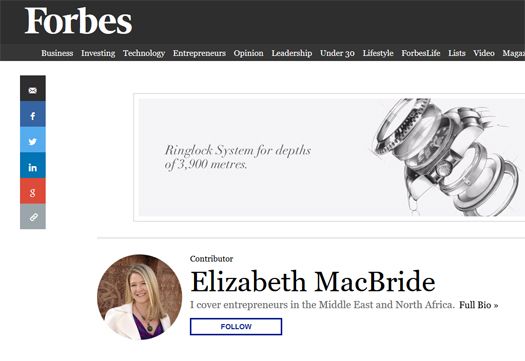 MacBride, a freelance writer who covers international business, relies on hackneyed canards, originally wrote of “1.8 million people slowly strangling under an Israeli military blockade and the world’s growing indifference.” While the article repeatedly notes “a military blockade by Israel,” there’s no mention of the fact that Israel allows in virtually all products aside from weapons and items defined as dual-use items (ie can be used for military purposes), a fact confirmed by the Israeli NGO Gisha, which is highly critical of Israel’s policies with respect to Gaza.
“Gaza is an open-air prison,” MacBride quotes the former director of Gaza Sky Geeks who trots out a tired anti-Israel charge. Meanwhile, some 14,000 people exit the Gaza Strip via Israel every month, a fact which MacBride ignored. In contrast, since the beginning of 2016, the monthly average for exits through Egypt has been 1,896.
MacBride originally did not even mention the Egyptian blockade, which prevents the flow of materials throughout the year, and is entirely closed for all but a few days during the year. (The Egyptians opened the Rafah crossing for a brief respite earlier this month to allow pilgrims to take part in the Hajj. The opening is the exception as opposed to the rule, in contrast to Israel’s crossings, which are open on virtually all business days.)
Only after CAMERA complained to Forbes did editors add in a few words (bolded below) about the Egyptian blockade: “On the shore, are the 1.8 million people slowly strangling under an Israeli military blockade that’s been reinforced by Egypt’s border closure and the world’s growing indifference.” (Emphasis added.) MacBride’s singular focus on the Israeli blockade and her complete lack of interest in the infinitely more restrictive Egyptian blockade is a recurring theme which was apparent in additional articles she wrote last month, one of which was subsequently amended. Contrary to standard journalistic practice, Forbes did not append any correction alerting readers to the change.
Nor is MacBride’s reference to the “world’s growing indifference” on the mark. Palestinians receive more international aid per capita than any other population in the world, another fact which she ignored. Indeed, shortly before MacBride’s story was published last month, the issue of humanitarian aid to the Gaza Strip made headlines given the reported diversion of millions of dollars of aid from the World Vision church group to Hamas. (Also in August, a United Nations aid worker was indicted for providing material assistance to Hamas, including “transfer[ing] 300 tons of construction rubble to a port that he knew would be used at some point by the Qassam Brigades, Hamas’s military wing,” The New York Times reported.)  But MacBride missed the whole question of any Hamas responsibility for difficult circumstances in the Gaza Strip.
Though Hamas is undeniably at the very least partially responsible for the Gaza Strip’s difficult humanitarian situation, MacBride mentions the organization just once: Gaza is “under a military blockade by Israel, which is at war with the Hamas-controlled government. . . ” Nowhere does she point out that Hamas is considered by the United States and European Union to be a terrorist organization. It has repeatedly attacked Israel, and supports attacks against Egypt, thereby prompting both countries’ blockade (and, as noted, the Egyptian blockade is far more harsh.) Instead of building attack tunnels and ports, Hamas could use its aid and resources to build homes, civilian infrastructure and businesses so regular Gazans like fisherwoman Madeleine Kulab would have more economic opportunities. According to Israeli figures, Hamas steals 95 percent of the concrete transferred to Gaza for civilian use.
About Gazan fishermen or possibly smugglers out at sea, she grossly exaggerates and misleads: “Whatever they are doing, they are sometimes killed by guns.” What would news consumers understand when they read that Gaza fisherman and possibly smugglers are “sometimes killed by guns”? Perhaps that one out of five or 10 fishermen is killed? Perhaps Israel shoots dead a couple of fishermen a week, or month? In fact, contrary to MacBride’s suggestion, such incidents are extremely rare. In January 2016, Hamas said one of its commanders (not a fisherman) was killed off the coast. Before that, the Egyptian (not Israeli) military reportedly killed a Gaza fisherman in November 2015. Before then, there was another incident in March 2015. In other words, in the last year and a half, during which thousands of fishermen ventured out into the waters on a routine basis, there appears to be one instance in which the Israeli navy killed someone that Palestinians identified as a fisherman. (According to the Israeli military, the fisherman deviated from the fishing zone and ignored calls to halt.) MacBride’s vague and imprecise passage gives an extremely misleading impression of this reality in which the journalist “sometimes” gets the facts right.

Addressing the question of content quality, Sonderman wrote in his Poynter piece on Forbes:

There is no traditional editing of contributors’ copy, at least not prior to publishing. If a story gets hot or makes the homepage, a producer will “check it more carefully,” [Forbes chief product officer Lewis] DVorkin said.

Traditional-minded journalists probably think that sounds reckless. From the beginning, there were concerns that Forbes’ model might “lessen the qualityof the content.” Just last week, a Forbes contributor stumbled by writing a controversial post, deleting it to post an apology, only to have a Forbes producer later restore his original text with the apology.

But DVorkin argues that overall Forbes’ model is better than the traditional newsroom one, where a reporter has editors and fact-checkers absorbing the responsibility for accuracy.

Forbes’ failure to correct the grossly misleading characterization of Gaza fishermen as “sometimes killed” points to a faulty model, as does its failure to add any information about Hamas responsibility for Gaza’s dire situation. The editors’ failure to address the serious shortcomings in MacBride’s propagandistic piece belies Forbes’ stated “commitment to upholding the highest standards of professional journalism” and underscores the value of traditional editing and fact-checking.
Donate Now