In April, with the global battle to contain the spread of Covid-19 in full swing and much of the world’s population facing severe restrictions or even lockdown, CAMERA elicited a record 27 corrections in a variety of news outlets: from major media outlets including The New York Times, Associated Press and NBC, to non-Western and alternative news sources. Among the 27 corrections were four in Arabic, prompted by CAMERA Arabic at BBC, American Al Hurra and Germany’s Deutsche Welle.

Most of the corrected errors were either directly related to the pandemic or had appeared in the context of coronavirus coverage. 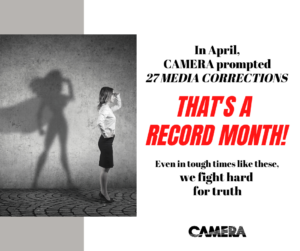 News consumption was up in six Western countries surveyed by the Reuters Institute in late March and early April, as were fears concerning misinformation about the novel coronavirus, leading some observers to warn of a “disinfodemic.” It was against this backdrop that CAMERA, which has been monitoring international media coverage of Israel and the Middle East for nearly four decades, secured the unprecedented number of corrections. ,

Despite the noteworthy cooperation between Israel and Palestinian leaders in combatting the spread of the coronavirus, a handful of media outlets falsely alleged that Israel blocks the passage of medical necessities to the Gaza Strip. By prompting a correction shortly after an Associated Press story falsely reported that Israel prevents surgical supplies from reaching the coastal Palestinian territory, CAMERA preemptively ensured that the correct information would get to the news agency’s clients around the world.

The CAMERA-prompted correction of the virtually identical falsehood in a Washington Post Op-Ed sent a clear message with a reach far beyond the Post: factual assertions in opinion columns must also be accurate. Following a correspondence with CAMERA, the Forward likewise commendably corrected an Op-Ed that falsely reported Israel bans dual-use items, including disinfectants, from reaching the Gaza Strip.

A fake news story that began in the east, at Pakistan’s Naya Daur, quickly spread westward when Pink News cited the English-language report as its source for the false claim that Israeli Health Minister Yaakov Litzman blamed homosexual behavior as the cause of coronavirus. CAMERA put a stop to the infectious spread of this falsehood by prompting correction at the Pakistani source, along with a series of diverse media outlets including Progressive Secular Humanist, Out in Perth, Business Line (India) and Alhurra, an Arabic-language U.S.-based public satellite news outlet.

Media corrections are more than just footnotes at the bottom of offending articles. They also serve as correctives that help prevent future repeats of the error by the reporter and his media outlet. And they don’t occur in a vacuum. In this interconnected world, media outlets, learn from the missteps and subsequent steps towards accountability from their counterparts elsewhere. Keenly aware of this reality, CAMERA cites substantive corrections at leading media outlets to leverage corrections and improved coverage at other media outlets.

Such was the case when CAMERA elicited corrections at Times of Israel and BBC after the media outlets vastly overstated the number of residents of the ultra-Orthodox town of Bnei Brak believed to be infected with coronavirus.  Citing these corrections, CAMERA then persuaded NBC editors to likewise set the record straight.

Unfortunately, there were some media outlets that refused to uphold professional journalistic standards, degrading the quality and credibility of news coverage across the board. Thus, The Los Angeles Times and The Jerusalem Post notably failed to correct the claim that more than a third of Bnei Brak residents, or 75,000 people, were believed to be infected, though Maccabi, the HMO which was the purported source, had quickly disavowed the inflated figure.

Misinformation crops up with a variety of symptoms, not only misreporting within an article. CAMERA UK compelled The Financial Times to remove an egregious headline which falsely stated that “Arab medics battling coronavirus in Israel” are somehow the product of a “segregated society.”

During the all-consuming pandemic, not all fatalities and ailments are coronavirus-related, and not all media errors and corrections are related to the illness. Thus, The New York Times was compelled to correct a reference to the disputed West Bank as “Palestinian territory,” partisan language which wrongly suggests Palestinian sovereignty in the territory. In an indication that other events outside the medical crisis were still ongoing, the Western Mail (Wales) amended a report that stated as fact the unconfirmed Syrian claim that Syria shot down Israeli missiles.

Media outlets that subsequently corrected chronic misinformation include Agence France Presse, which had published numerous photo captions erroneously misidentifying the Western Wall as Judaism’s holiest site (thus downplaying the significance in Judaism of the Temple Mount, the actual holiest site) and BBC Arabic, which mischaracterized the Gaza Strip as the most densely populated place on earth. (It’s not.)

The value of corrections is often underappreciated, with skeptics maintaining that the original reports appeared prominently while the corrections are buried on inside pages. But in an era when so much media coverage is recorded for virtual posterity online, a digital correction is of utmost importance, leaving a serological-type marker for visitors to the page: this report had been wrong, but now it is corrected. These journalistic antibodies also live on in news databases like Lexis-Nexis, appended to the original erroneous report, preventing further spread of the infectious falsehood to subsequent reporters and researchers.

Thus, whether the misinformation is coronavirus-related or not, the antidote is the same: adherence to good, healthy practices, that is professional codes of journalistic ethics,

including the upholding of accuracy and accountability clauses. There is no magic vaccine for false reporting, and anyone who says otherwise is selling fake news.