Following the publication of this post and additional communication from CAMERA to senior New York Times staff, editors published corrections, online Sept. 14 and in print today, acknowledging "separate kingdoms remained sovereign for hundreds of years." See below for a detailed update.

While denying and downplaying Jews' presence in their ancient homeland has long been a mainstay of Arab anti-Israel propaganda, at times this particularly noxious type of delegitimization of the Jewish state also finds a platform in international media coverage.

Curiously, it's precisely media items supposedly about Jewish history that tend to minimize the historical connection between the Jews and their ancient land.

In 2015, The New York Times, for example, infamously called into question whether the ancient Jewish Temples were located on the Temple Mount ("Historical Certainty Proves Elusive at Jerusalem's Holiest Place"). In fact, serious archeologists agree with the indisputable evidence of the Temple's location at the site, and The Times subsequently published a lengthy editor's note.

In a 2019 feature entitled "Six periods in Jewish history," Agence France Presse unbelievably reported that Jerusalem became a city sacred to Jews during the Muslim conquest in the seventh century. In reality, Jerusalem held a sacred status in Jerusalem for some 1500 years prior to the Muslim conquest, as the media outlet was compelled to correct.

This week, The Times again flunks on the facts regarding Jews in their homeland during antiquity. The Sept. 11 article examines lessons for present-day Israel from "Legend of Destruction," an animated film about the destruction of the Second Temple and the fall of Jerusalem in the Roman conquest against the backdrop of internal disunity ("For a Fractured Israel, a Film Offers Ominous Lessons From Ancient Past").

Leaving aside whether Israelis have absorbed the lessons about the past concerning unity and civil discourse, it's clear that The New York Times has not learned its past lessons. Once again, it mangles the historical record, minimizing the Jewish people's presence in ancient Israel.

In fact, the Kingdom of Judah was extant for more than 300 years, from the time of the collapse of the United Kingdom of Israel in 922 BCE until the Babylonian conquest in 586 BC. (The United Kingdom lasted for approximately a century, starting around 1020 BCE).
The northern Kingdom of Israel, the other half of what became of the United Kingdom when it fell apart in 922 BCE, lasted for approximately 200 years, until the Neo-Assyrian empire conquest.
Besides these three separate kingdoms of Jewish rule (two of which were contemporaneous), there was also the Hasmonean dynasty, which achieved autonomy from the Seleucides in 147 BCE and independence in in 129 BCE. The Kingdom lasted for some 80 years.
Thus, four Jewish kingdoms pre-dated the modern Jewish state during antiquity, and the longest one lasted more than three centuries, not 80 years. By falsely reporting that the longest Jewish rule in Israel fell in less than 100 years, The Times minimizes the historic Jewish connection to ancient Israel, eroding the legitimacy of the present Jewish state. 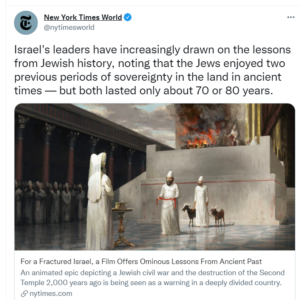 Tellingly, from the otherwise fascinating and informative article about what looks to be an intriguing film, The New York Times selected to highlight on Twitter that singular sentence with the falsehood underreporting the long Jewish sovereignty in the ancient land of Israel.
Yesterday, CAMERA contacted The New York Times to request a correction, making clear that the longest Jewish sovereignty in ancient Israel extended beyond three centuries, and that it was one of four Jewish sovereignties in antiquity.
True to its identity as The Paper of Narrative, as opposed to the paper of record, The New York Times declined to correct, responding that article's "intention" was to reference the "two periods when there was both unity and sovereignty," supposedly the United Kingdom of Israel (in which Saul, David and Solomon ruled), and also the Hasmonean period. (As for unity during the Hasmonean period, that too is a total fallacy.)
An 80-year lifespan for ancient Jewish sovereignty provides a tidy touch to the article's narrative about fractious, present-day Israel learning from the dangers of the fallen kingdoms of antiquity. The passage in question suggests that the 73-year-old Jewish state likewise totters perilously close to the abyss of expiration:

Israeli leaders have increasingly drawn on the lessons from Jewish history, noting that the Jews enjoyed two previous periods of sovereignty in the land in ancient times, but both lasted only about 70 or 80 years — a poignant reminder for the modern state that, founded in 1948, has passed the 70-year mark.

As for the paper's justification for refusing to conform with the facts, whether or not the article intended for the 80 years to refer specifically to periods of sovereignty and unity, that's not what it says.

How many Times readers know the complex history of Israel in antiquity and would understand from the sentence that really the author meant "sovereignty and unity"?

Since when does intention (which is in the journalist's head, and which readers cannot possibly divine) take precedence over language which informs – or misinforms – readers?

Following the publication of this post along with additional communication from CAMERA's Israel office to senior New York Times staff, on Sept. 14 editors appended the following correction to the bottom of the digital article:

An earlier version of this article stated imprecisely the time periods when Jews enjoyed sovereignty in the land in ancient times. While the first period of unified sovereignty some 3,000 years ago is believed to have lasted for less than a century, separate kingdoms remained sovereign for hundreds of years.

The digital article was amended to refer to "unified sovereignty": "Jews enjoyed two previous periods of unified sovereignty in the land in ancient times, but both are believed to have lasted only about 70 or 80 years" (emphasis added). Unlike the correction, the amended digital article itself still does not make reference to the Kingdom of Judah which was sovereign for more than three hundred years.

An article on Sunday about the film ''Legend of Destruction'' referred imprecisely to the time periods when Jews enjoyed sovereignty in the land in ancient times. While the first period of unified sovereignty some 3,000 years ago is believed to have lasted for less than a century, separate kingdoms remained sovereign for hundreds of years.