What do you do when you’re a journalist or the United Nations (UN) and you want to talk about the Israeli-Palestinian conflict, but the thought of giving representative Israelis a voice makes you gag? Simple: find a fringe token Israeli or, if you’re feeling extra bold, just invent an “Israeli” and speak for him!

That was the basis of a two-day “International Media Seminar on Peace in the Middle East” the UN held this week. The UN and the media talking about Israel; what could go wrong? 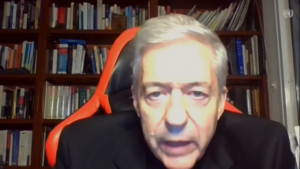 Yossi Beilin speaking at the UN International Media Seminar on Peace in the Middle East on November 16, 2021.

I spent nearly five years covering and researching the UN. I cannot recall a single instance in which the UN brought in a mainstream Israeli voice to discuss the Israeli-Palestinian conflict. Instead, I recall only fringe, left-wing Israelis who never have anything nice to say about their fellow Israelis, or, on occasion,  diaspora Jews who make careers out of lecturing and talking over Israelis. This included folks from fringe Israeli or Jewish groups like Jeremy Ben-Ami of J-Street, B’tselem’s Hagai El-Ad, or the Joint List’s Aida Touma-Sliman (who spent his time claiming there is no such “creature” as the “Zionist left”).

This would be like the UN inviting only members of the Green Party or the Libertarian Party and presenting them to the world as somehow representative of the American public.

This week was no exception to the rule. Instead of bringing a fairly representative Israeli personality, perhaps a Jerusalem Post journalist like Lahav Harkov, the UN once again turned to a favorite token Israeli: Yossi Beilin.

This is also not the first time I’ve seen Beilin at the UN. In 2018, I watched him in-person at a UN panel during which he had nothing kind to say about his own country (unless it happened to make him look like a saintly peacenik). While the audience taunted him, belittling the very idea of a Jewish state, while others called the Jewish State “racist” and a “fascist society,” Beilin could hardly be bothered to stand up for his fellow Israelis. He was once again trotted out as a token Israeli for a UN panel in 2020 during which, alongside notable anti-Israel personalities like the terror-justifying Hanan Ashrawi and James Zogby, he focused on criticizing Israel’s “threat of annexation.”

This week’s “media seminar” was thus another classic example of the UN’s – and all too much of the media’s – refusal to listen to or include mainstream Israeli voices. The good news is there was at least some self-awareness of this fact. This was demonstrated in a revealing joke by none other than the Palestinian “ambassador” to the UN, Riyad Mansour:

Moderator: I’d like, Grace [Wermenbol], if you could just come in now. Having written this book, the Tale of Two Narratives, and maybe give us a bit of insight into what the book is all about. Why is it titled ‘A Tale of Two Narratives,’ and are you hearing two narratives after spending more than an hour, at this seminar today?

Mansour: [Laughs] I don’t think Yossi Beilin is representing the other narrative. He’s closer to my narrative!

Yes, Mr. Mansour, I picked up on that, too. How hilarious.

With all due respect to Beilin, the ideas and positions he espouses are not exactly representative of broader Israeli society. During his political career, Beilin was a member of the Meretz Party. For context, in the last two decades, Meretz has never won more than 6 seats in the 120-seat Knesset, including in 2006 when Beilin himself led Meretz.

Strangely, Mr. Mansour’s candid comment was not the most revealing one of the two-day event. During the second part, award-winning Palestinian journalist Daoud Kuttab – featured in such prominent publications as the New York Times, Washington Post, and the Los Angeles Times – was asked to give an example of “solution journalism.” His response took the idea of using fringe Israeli voices a step further – just pretend you’re an Israeli and speak for them!

Kuttab: I haven’t seen a lot of solutions journalism on the Palestine-Israel conflict, to be honest. We have two narratives that are so far-fetched that we cannot really bring them together. I’ve tried a few things. For example, for the last five years, there’s a man sitting in Israeli jail named Mohammed Halabi. He used to work for World Vision, and Israelis decided one day that he has diverted $50 million worth of money that is supposed to go for humanitarian aid to what they call a terrorist organization. But the court didn’t really come up with any results. There was no evidence. And I tried to come up with an idea. And so one of the ideas I came up with is I pretended to have an interview with the Israeli prosecutor. And I asked him, obviously he will not give me an interview, so I came up with what I thought the Israeli prosecutor would say, I mean, based on what was going on in the court and what we know from the public record. And I created a narrative, a question and answer. Now if you’re reading it and you’re very open-minded, you’ll realize who is telling the truth and who is not. I didn’t take positions, I didn’t try to make the audience take a position, but I tried to pretend to be both the journalist and the prosecutor, based on what the prosecutor said in the court, and basically I debunked all the things he said in the court, but in a clever, journalistic way. I don’t know if that’s solution journalism, but at least I tried to give both points of view, even though I was unable to get a direct interview, which I would’ve liked. 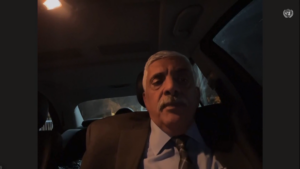 Daoud Kuttab speaking at the UN International Media Seminar on Peace in the Middle East on November 17, 2021.

It shouldn’t be necessary to explain all the reasons why Kuttab’s approach is disturbing. Keeping with Kuttab’s theme, this would be like a prosecutor cross-examining a defendant, but instead of letting the defendant answer for himself, the prosecutor answers for him.

Kuttab hides behind the apparent unwillingness of the prosecutor to speak to him as a journalist. While he was creative enough to invent an Israeli, he was apparently not creative enough to find obvious solutions to his dilemma, such as interviewing any other Israeli attorney or legal expert, of which there is no shortage. At least now we know Kuttab’s bizarre concept of presenting “both points of view” while “creat[ing] a narrative.”

This is, of course, a longstanding reality at the UN, where a plethora of absurdly biased mechanisms exist to amplify Palestinian narratives and voices, all while Israeli or pro-Israeli views and voices are actively suppressed.

One of the many hateful tweets posted by Refaat Alareer, who Patrick Kingsley of the New York Times wrote a puff piece about.

But this bad practice is also seemingly infecting mainstream media outlets more and more. Just recently the New York Times’s Patrick Kingsley traveled through Israel and somehow could only find sad, bitter Israelis – in a country widely known to have one of the happiest populations in the world – a reality supported by the data. It is perhaps no coincidence that a few short weeks later, Kingsley authored a puff piece that completely whitewashed a Palestinian professor who can only be honestly described as hideously antisemitic. He can’t find a happy Israeli, but he can find the “good” in someone who believes “Zios are the enemy of the free and decent people around the world.”

How often do you see American media news articles seeking out for comment, or elevating the voices of, groups like J-Street, Jewish Voice for Peace, or B’tselem? On the flip side, how often do you see that treatment for pro-Israel organizations and voices, which represent far more of the American Jewish and Israeli public? As written by another analyst, “on nearly every Jewish-adjacent issue to grace American headlines, these fringe Jews are either profiled to give tailwinds to their cause or tokenized to give the appearance of controversy among Jews when for all practical purposes there is none.”

The marginalization of Israeli and pro-Israeli voices in favor of fringe groups and personalities is damaging not only to those who are ignored, but to the wider causes of peace in the Middle East and of a thriving and free press. The only small comfort is that we exist in an era in which the ability of everyday people to raise their own voices and call out bad journalistic practices is easier than ever.