Jan. 23, 2006 — The investigations that exonerated Israel for the killing seven years ago of 12-year-old Mohammed Al-Dura did little to soothe the raging Muslim world. Once again, Israel has been blamed for the killing of a 10-year-old Palestinian child, and the death is expected to fuel Arab hatred of Israel. As the AP reported on Friday, Jan. 19:

Meanwhile, the 10-year-old daughter of a Palestinian peace activist died Friday after being struck in the head days earlier by a rubber bullet fired by Israeli security forces in the West Bank. Abir Aramin’s death was expected to further fan Arab anger against Israel.

A 10-year-old Palestinian girl has died of wounds suffered after Israeli border police fired on demonstrators in a village outside Jerusalem this week, her family said Friday.

A 10-year-old Palestinian girl, Abir Aramin, died Friday from wounds sustained when she was hit by fire from the Israeli border police on Tuesday in the West Bank town of Anata, near Jerusalem, Palestinian witnesses and relatives said. Abir and her classmates were on recess from school when the Israeli forces fired on stone-throwing Palestinians with rubber bullets and stun grenades, according to the Palestinians.

On Jan. 22, however, Ha’aretz reported that an autopsy ruled out rubber bullets as the cause of the fatal injury:

Ten-year-old Abir Aramin was apparently killed by a blunt object, and not by a rubber bullet, as some eyewitnesses claimed, according to the autopsy findings. . .

Police sources said on Sunday that autopsy findings indicated Aramin could have been killed by concussion from a shock grenade or by a thrown rock. However, they said, the findings were inconsistent with her having been killed by a rubber bullet: No bullet wounds were found on her body, and the skull injury that caused her death was a large one, whereas rubber bullets, even if they do not penetrate, usually make small wounds.

The autopsy was performed last Friday at the Institute of Forensic Medicine in Abu Kabir, with a pathologist hired by Aramin’s family in attendance. (“Girl allegedly killed by Border Police may have been hit by rock”)

Thus, stone-throwing Palestinians, as opposed to Israeli border police firing rubber bullets (as initially reported), may very well have been responsible for the death of Aramin. Also, while the report did not rule out the possibility that Aramin was hit by an Israeli-fired stun grenade, there is no basis for AFP’s categorical statement that she was wounded “by shrapnel from a stun grenade fired by the Israeli force.”

CAMERA’s blog Snapshots, which initially picked up on the issue, yesterday (Jan. 22) concluded that “the question remains how quickly and effectively media outlets can undo the damage” of the intial reports which hastily blamed Israel without question. One day later, the mainstream media has done little to salvage the faulty early coverage. Despite information provided yesterday to its Jerusalem bureau about the autopsy report ruling out rubber bullets, the Associated Press has not covered this development. Thus, Nessman’s definitive Jan. 19 assertion that Aramin was “struck in the head days earlier by a rubber bullet fired by Israeli security forces” remains the AP’s last word on the matter (so far).

Likewise, the AFP has not reported on the autopsy finding.

As for the New York Times, Myre followed up on Jan. 23 with an article focusing on the story of Bassam Aramin, Abir’s father, a former Palestinian fighter who joined Combatants for Peace, “a group of former Palestinian militants and former Israeli soldiers who have teamed up to urge reconciliation on both sides” (“Father of Dead West Bank Girl Seeks Peace with Israelis“). Here, acknowledging the ambiguous circumstances of death, Myre went into detail:

Areen [Abir’s 12-year-old sister who was with her when she was hit] and other Palestinian witnesses say they have no doubt that Abir was hit by Israeli fire. Michael Sfard, a prominent Israeli lawyer representing the Aramin family, said he had received a rubber-coated steel bullet that witnesses said they had found at the scene, which he presented to the Israeli police.

But the assertion that Areen has “no doubt that Abir was hit by Israeli fire” is simply not credible in light of an AP article on Bassam Aramin which stated:

Abir and her sister Areen, 12, were in the street near the school when Abir was hit by something in the back of the head, Areen said, adding that she is not sure what it was. (Karin Laub, AP, Jan. 22)

If Areen is not sure what hit Abir, how can she have “no doubt” that it was Israeli fire? (Laub’s report does not delve any further into the causes of Abir’s death, stating only that she was “killed in a clash [sic — she died two days later] between stone throwers and Israeli border police.”)

The Times‘  report then takes an even more puzzling turn:

A preliminary report of the autopsy conducted by an Israeli government pathologist and one appointed by the Aramin family found that Abir’s head wounds were consistent with the i mpact of a rubber-coated bullet, though other possibilities could not be ruled out, Mr. Sfard said.

But the Israeli police say the autopsy did rule out the possibility of a rubber-coated bullet. The police say an investigation has found that police officers fired tear gas but has not confirmed the use of such bullets. A police official, speaking on condition of anonymity because the inquiry is continuing, said the police suspected that Abir might have been hit by a rock that one of the Palestinians had thrown toward the police.

Myre effectively turned the contents of the autopsy report, which have not yet been released to journalists, into a “he said/she said” dispute. Police spokesman Micky Rosenfeld told CAMERA that by the end of this week, once the investigation is completed, he will hold a press briefing and release to journalists the autopsy report which explicitly rules out rubber bullets as the cause of death. At that point, Michael Sfard will be completely discredited. As for little Abir Aramin, by then she will have long gone down in the Muslim world and beyond as a marytr felled by Israeli fire. Stay tuned for updates. 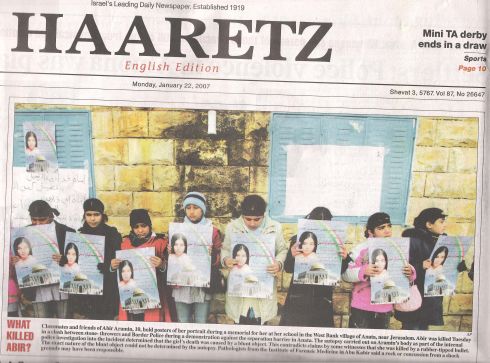 The large headline with the image is “What killed Abir?” Nevertheless, on page five of the very same paper, opinion writer Danny Rubinstein writes:

In just the newspapers of this just [sic] last week there was a long series of articles about the settlers of Hebron and Tel Rumeida, the death of the little girl in Anata from Border Police fire .  . .

CAMERA contacted Rubinstein and publisher Amos Schocken to point out that the claim in Rubinstein’s opinion piece is contradicted by two news items in the very same paper. In addition, CAMERA requested “a clarification pointing out that contrary to your assertion, the Israeli border police are not necessarily to blame.”

Rubinstein’s response: “I suggest to wait until the official publication of the investigation into the matter.” Rubinstein, though, did not feel bound to wait for official investigation results when he categorically pinned blame on Israeli border police fire, contradictory Ha’aretz news reports aside.

Yesterday, AP’s Dalia Nammari wrote an article which made clear that her colleague Ravi Nessman’s initial report, in which he stated as fact that Aramin was hit rubber bullet fired by Israeli security forces, is not necessarily true. Entitled “Israeli police re-enact killing of 10-year-old Palestinian girl,” the article states:

Israeli police on Sunday re-enacted the killing of a 10-year-old Palestinian girl, daughter of a peace activist, but said they did not reach a firm conclusion about the cause of death. . . .

Abir’s father, Bassam, 37, said he believed the girl was hit in the back of the head by a rubber bullet, but an autopsy performed by Israeli doctors, with a pathologist appointed by the family in attendance was inconclusive, according to Israeli officials.

Israeli police re-enacted the incident Sunday and interviewed witnesses as part of the investigation. Those questioned included Abir’s 12-year-old sister, Areen, who on Jan. 16 had been with her sister when she was struck just outside her school. Areen has said she did not know what hit her sister.

Nammari could have been a little more clear on one point; While the autopsy was “inconclusive” in that it is still unknown whether Aramin was hit by an (Israeli) stun grenade or by a (Palestinian) rock, it did rule out rubber bullets.

Update, Sept. 28, 2011:
After examining the evidence, the Israeli courts eventually concluded that Aramin was in fact killed by an Israeli rubber bullet, and ordered the state to compensate her family. See details here. The point made above remains: As long as it was unclear what was responsible for the girls death, as was the case in 2006, reporters had the obligation to report what was known, and not prematurely jump to categorical conclusions. See further discussion on that point here.