The latest New York Times hagiography of an anti-Israel activist has dropped.

The weekend’s fawning feature is about Rashida Tlaib—or more specifically, about the righteousness of Rashida Tlaib’s anti-Israel dogmas. It follows just a few months after the paper printed another flattering story about an anti-Israel (and anti-Jewish) activist, Gaza poetry professor Refaat Alareer.

The premise of the earlier piece was, commendably, retracted with an editors’ note acknowledging failures in reporting. (Alareer was feted as a bridge-builder, though he is a hatemonger.) 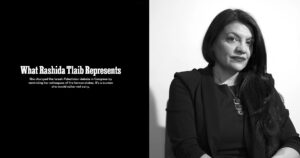 The cover image for the New York Times fawning feature on Rashida Tlaib.

The new piece, which was published online on Thursday and is slated to appear in print in this weekend’s Sunday Magazine under the headline “What Rashida Tlaib Represents,” will get no such sweeping correction. That’s because author Rozina Ali was honest — not on the details of the conflict, but at least about the essence of Tlaib’s extreme positions.

Tlaib seeks an end to Israel. Ali more or less admits it. Tlaib is unhappy about Israel’s life-saving anti-rocket system, the Iron Dome. Ali doesn’t deny it. Indeed, to conceal these beliefs would be counterproductive, since the core premise of the piece is that they are noble positions.

In promoting that conclusion Ali plays tricks on her readers, with the tendentious characterizations starting at the very first sentence: “Last May,” she writes, “following protests in East Jerusalem over planned evictions of Palestinians, Hamas started firing rockets toward Tel Aviv, and Israeli airstrikes pounded residential buildings in the Gaza Strip.”

Hamas started a war. It did so by launching scores of indiscriminate rockets. Israel responded militarily to bring an end to the attacks. For Ali to be so wishy-washy about the order of events here—the word “and” works to conceal a clear sequence to the attacks—is either a failure at forthright explanation, or a success at disingenuous writing.

A closer look suggests Ali was going for the latter, as the sentence obfuscates more than just the sequence of events. Hamas, in her account, was merely “firing rockets,” and merely firing them “toward” Tel Aviv. Israel, by contrast, is said to have “pounded residential buildings” with its airstrikes. The message is that, while we don’t know what Hamas was aiming for, Israel’s target was Palestinian civilians.

She reiterated the point in the following paragraph, when describing the fighting as little more than Israel “bombing civilians.”

This is an inversion of reality. Hamas’s indiscriminate rocket attacks, which targeted Jerusalem and other areas across Israel, are unequivocally war crimes under international law, as they amount to attacks on civilians. Israel’s response targeted military targets—especially Hamas fighters and leadership, who often shielded themselves (again, in violation of international law) among civilians.

If it is still unclear that Ali’s language is designed to downplay Hamas’s provocations, she does it again later in the piece, when describing an prior round of Hamas-Israel fighting, in 2014, as follows: “Israel launched a major military operation in the Gaza Strip after the kidnapping and murder of several Israeli teenagers by the Hamas militant organization.”

But the murders, as terrible as they were, did not prompt Israel’s military operation in Gaza. They prompted a manhunt across the West Bank. Rather, Operation Protective Edge was a reaction to incessant and escalating Hamas rocket attacks against Israel. As the Associated Press reported on the day before the operation, “Gaza militants have been bombarding Israeli with daily rocket fire, drawing Israeli airstrikes in retaliation.” On that day alone, 80 rockets were launched at Israel.

Ali erases them all.

And she doesn’t stop there. The tendentious characterizations continue when she claims that the so-called Boycott, Divestment and Sanctions movement “aims to end military occupation by exerting economic pressure on Israel.”

This is a flagrant mischaracterization of BDS aims, and has even been corrected, twice, by the New York Times. In reality, BDS aims to eliminate the very existence of the country, demographically gerrymandering away its Jewish majority with policies that, as a senior BDS leader admitted, would replace Israel with “unitary state, where, by definition, Jews will be a minority” (emphasis added). It is this that Ali euphemistically calls “Palestinian rights” throughout her piece.

And yet more facts are twisted or omitted to condemn Israel, such as in the following passage:

During the 1990s the Israeli government and the Palestine Liberation Organization, along with the United States, agreed that the best solution to the conflict was the establishment of two states: a sovereign Palestine and a sovereign Israel coexisting side by side. Though the borders have never been agreed upon, the two-state outcome remains a “core U.S. policy objective,” according to the State Department. But since then, settlements have grown steadily, while military occupation of the Palestinian territories continues.

No, the Israelis, Americans, and Palestinians had not agreed that the best solution was “the establishment of two states.” The Oslo peace accords, which this passage describes, says nothing about a Palestinian state.

Nonetheless, Israel has offered Palestinians statehood. So why does the “military occupation of the Palestinian territories,” as she puts it, continue? Because Palestinian leaders have repeatedly rejected such offers. An inconvenient fact. But a necessary one for those seeking to understand the history Ali points to.

In light of all these distortions, it should only be expected that the author also conceals inconvenient facts about her subject. Rashida Tlaib “has been called anti-Semitic for her criticism of Israeli policies,” Ali dismissively writes.

She says nothing, though, about one of the more recent controversies. In August, Tlaib told an audience that “from Gaza to Detroit,” the system is “designed by those who exploit the rest of us for their own profit.” And the system was designed by the same shadowy forces: “If you open the curtain and look behind the curtain it’s the same people” who profit from racism.

A vague “they” conspiring to “exploit the rest of us for their own profit” from “behind the curtain:” These antisemitic tropes have been used against the Jews for generations.

The head of the ADL similarly wrote: “We’ve heard this kind of ugly antisemitic dog whistling before, but it’s appalling when it comes from a member of Congress.”

Far from the impression Ali gives of bad-faith charges of antisemitism meant to stifle any criticism of Israel, these are specific and substantive critiques focused on Tlaib’s language.

Yet another story taking aim at Israel. Yet more distortions.

Ali, at least, does mention the criticism that followed Tlaib’s slur about American supporters of Israel having “forgot[ten] what country they represent.” But she seems to miss that this example, too, belies her claim that accusations of antisemitism follow from mere “criticism of Israeli policies.” This, after all, was an allegation of dual loyalty levelled against Americans, not a comment on Israeli behavior.

As a whole, Ali’s piece is meant as a lesson about, first, why Tlaib should be seen as a hero, and second, why Americans are allegedly receptive to her extreme anti-Israel messages.

For Ali, the answer to the first question is that Tlaib is a hero because her extreme anti-Israelism. That’s the author’s prerogative.

The second question is best answered not by the arguments in Ali’s article, but by the very existence and nature of the piece, which is more of the same from a newspaper that too-often excuses, or even lauds, attacks on Israel’s legitimacy and Jews in general.

Here is yet another story taking aim at Israel. Here are yet more distortions meant to misinform readers about the conflict. When editors make a point of defaming the Jewish state and whitewashing Palestinian contributions to the conflict, and do so again and again, it would hardly be surprising if some readers take the bait.

That’s what the Times article represents.