MSNBC host Mehdi Hasan has a book coming out later this year entitled “Win Every Argument: The Art of Debating, Persuading, and Public Speaking.” But in times of economic uncertainty and high inflation, why spend $27.99 when you can learn Hasan’s “art” for free just by observing his public tirades?

Based on a pair of his most recent displays of this “art,” it appears to boil down to three tactics Hasan commonly employs:

So with apologies to Hasan for stealing his thunder, here is a primer on the Mehdi Hasan “art” of debating.

Consider the following exchange between Hasan and Aviva Klompas, a prominent Jewish activist who previously served as then-Israeli Ambassador to the UN Ron Prosor’s speechwriter: 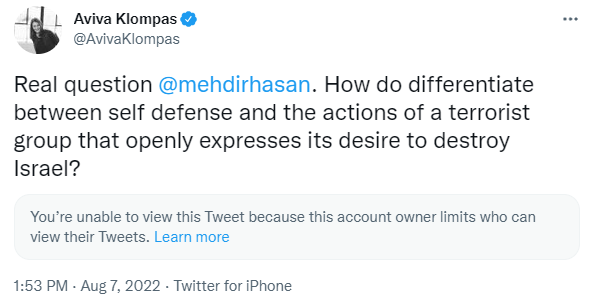 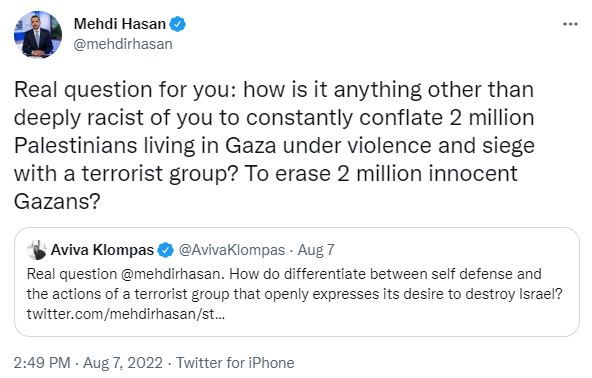 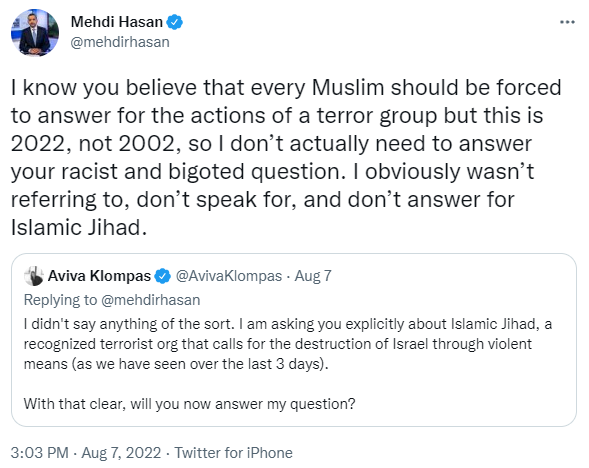 Even though Klompas clearly referred only to “the actions of a terrorist group,” Hasan immediately built the first straw man, blatantly distorting Klompas’s comments to suggest she was conflating the general population of Gaza – which she at no point referred to – with “a terrorist group.”

While anyone can build a straw man argument, not everyone can build one on top of another quite like Hasan. Demonstrating admirable patience in the face of Hasan’s obvious bad faith, Klompas responded to his first straw man by repeating her question, which was asked directly in response to his initial comment and addressed specifically to him as an individual. Instead of reciprocating her good faith effort at dialogue, Hasan turned Klompas’s “I am asking you” into “I know you believe that every Muslim should be forced to answer.”

At no point did Hasan actually answer her direct question. It’s the secret of this Mehdi Hasan technique: you don’t need to lose a debate over inconvenient details if you never engage with those details.

Lesson #2: Hide Your Outlandish Claims Behind False Appeals to Authority

On the Mehdi Hasan show, whenever the topic of Israel comes up, inevitably the phrase “the UN says” will be repeatedly wielded alongside any number of hotly disputed, controversial, or dubious factual and legal claims.

That’s how, for example, on Sunday, Hasan got away with claiming Israel “still technically occup[ies]” Gaza, notwithstanding the only living Israelis in Gaza are two mentally handicapped civilians held hostage by Hamas.

To be fair, it is hard to sound serious arguing that Israel exercises the functions of government and can project effective control in Gaza (absent a full-scale military invasion) while over a thousand rockets are being lobbed from Gaza at Israeli communities and everyone acknowledges Hamas is the “de facto authority” of the territory.

But that’s the value of lesson two. As demonstrated by Hasan, one can sidestep these obvious deficiencies by hiding behind the dubious claims of others. This way, Hasan avoids having to delve into important details like who at the UN said it, what authority or expertise they have, whether they’re a credible source, or even whether it came from a fundamentally political entity proclaiming political viewpoints, not factual or legal claims.

Another example from Sunday is when Hasan suggested that 70% of Gaza’s population are refugees – “according to [the] UN” – notwithstanding these “refugees” never actually left the “Palestinian territories” from which Hasan suggests they are refugees. By lazily relying on “according to [the] UN,” Hasan avoids dealing with the obvious complications of his argument, such as how if one were to apply the actual definition of a refugee, only about 5% of the five million “Palestine refugees” would likely qualify as refugees.

A third tactic from Hasan to “win arguments” is to tell half-truths and lie by omission. Want to make a point, but don’t want to deal with the inconvenient facts, nuance, or complexity? Just pretend they don’t exist! It is a tactic regularly employed by the MSNBC host.

Hasan combined this tactic with lesson #2 on Sunday when claiming “UN experts” have declared Israel’s blockade of Gaza is “collective punishment.” A technically true statement. For example, 9/11 conspiracy theorist Richard Falk, who the UN Human Rights Council deemed a perfect candidate to investigate the Jewish state between 2008-2014, labeled the blockade “collective punishment” during his tenure.

But crucially, this statement effectively sidesteps the fact that other “UN experts” that investigated the issue concluded not only was the blockade a legal measure in response to legitimate security threats, but that it found “no material…that would permit a finding” that the blockade was imposed to “collectively punish the civilian population.”

The UN, after all, has tens of thousands of employees. It isn’t hard to find UN actors, even “experts,” making contradictory statements. After all, the UN is fundamentally a political body that is currently dominated by mostly undemocratic states.

For anyone who regularly follows the UN, these omissions are easy to spot. Those well-read about the UN would also understand the lack of credibility that comes with the institution’s pronouncements. It is, after all, the same institution that recently created a “commission of inquiry” to investigate the Jewish state and left it in the hands of a man who suggested the “Jewish lobby” controls social media, a woman who has spent the last two decades trolling Jewish groups over the antisemitic harassment they faced at the Durban hate fest in 2001, and a man who thinks Jewish civil society organizations are actually just agents of the Israeli government.

However, Hasan certainly knows that for many Americans, the UN isn’t well understood. It’s a behemoth of an organization with a dizzying array of acronyms and codewords and features a notoriously non-transparent labyrinth of bureaucracy. Journalists, few of whom understand the UN themselves, often add to the confusion, declaring “the UN says” without specifying which official or deliberative body made the statement, and whether the statement has any actual authority or consequence.

It is this exact confusion and lack of knowledge that make Hasan’s tactics so potent. While trust in the UN hasn’t been high in the United States for decades, its name can still provide an undeserved veneer of credibility for many. Through these little omissions and wholesale appeals to UN authority, Hasan transposes that undeserved veneer onto his own personal opinions, and thus deceptively portrays them as objective factual claims.

Unfortunately, while it is easy to respond to Hasan’s bad faith with a healthy dose of sarcasm, the fact remains that MSNBC has provided him with a prominent platform. Through it, Hasan has consistently employed these dishonest tactics to present a skewed narrative that leaves his audience not only misinformed, but entirely ignorant of basic background.

So save yourself some money. Don’t spend the $28 when you can learn most of Mehdi’s “art” just by going to a used bookstore and finding a cheap philosophy book on fallacies and how they’re employed.