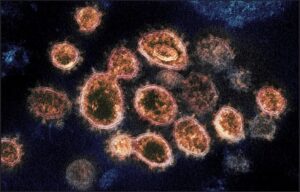 SARS-CoV-2, the virus that causes COVID-19 (Image from Credit: NIAID-RML via Flickr)

CAMERA’s Israel office yesterday prompted correction of an Agence France Presse article which erroneously reported that a Knesset committee “rejected” the government’s plan to track Coronavirus patients and locate those with whom they’ve come into contact (“Anti-virus measures spark Mideast fears of setback in liberties”) . The article errs: “Netanyahu drew criticism for imposing the measure with an emergency decree after a parliamentary committee rejected it.”

The foreign affairs and defense committee did not have enough time to rule on the measure. It had not “rejected it.”
As AFP reported at the time (“Israel spy agency joins anti-virus fight,” March 17):

The measure was approved by the government under emergency regulations, overriding a parliamentary committee that on Monday had withheld final approval, saying it needed more time to ensure proper safeguarding.

The draft proposal of the government’s plan had already been sent to the intelligence committee’s legal advisers on Sunday, but at that time it was kept classified. Panel members were only able to see it the following day, when they had just one hour to debate it before the new Knesset was sworn in.

[Panel chairman MK Gabi] Ashkenazi wouldn’t approve the proposal without an in-depth discussion. He proposed reappointing the committee as soon as the new Knesset was sworn in. But the cabinet approved the plan in the dead of night the following day, bypassing parliamentary oversight by using state emergency regulations.

Embattled Prime Minister Benjamin Netanyahu drew criticism for imposing the measure with an emergency decree as a parliamentary committee didn’t have enough time to rule on it.

CAMERA’s timely action vis-à-vis AFP’s article yesterday underscores the value of the organization’s monitoring and responding to wire stories in the same news cycle as they appear. With this preemptive work CAMERA helps prevent misinformation from appearing in media outlets around the world.
Donate Now